Review: Rip the Angels from Heaven by David Krugler 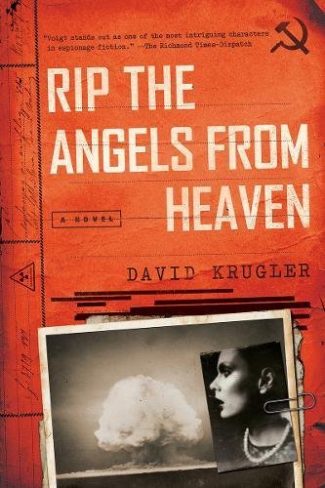 Rip the Angels from Heaven

Rip the Angels from Heaven by David Krugler is the thrilling sequel to The Dead Don’t Bleed, which follows Intelligence Officer Ellis Voigt as he fights to prevent the Soviets from infiltrating the Manhattan Project while running from enemies on both sides.

Lieutenant Ellis Voigt’s story opens in Washington, D.C., 1945. The United States entered World War II when the Japanese bombed Pearl Harbor on December 7, 1941, but to the war-hardened citizens of the Capitol, it feels like they’ve always been at war. Double-agent Voigt is low down on the totem pole in the D.C.-based Office of Naval Intelligence. Through a conflagration of suspicious circumstances, the FBI and the Soviets are hot on his tail. The reason: a suspicious murder.

The FBI suspects that he is the communist who murdered a Naval officer in a Washington back alley. The Soviets believe he’s holding back information from their contacts, and they’re willing to use any means necessary to extract it.

When life gets tough and the Russkies get closer, forcing an uncomfortable interview, Voigt ducks into the nearest tavern afterward. What better bolthole? David Krugler’s detailed description will have readers searching for their long-hidden pack of smokes.

The barkeep padded over, looked me over. I circled my finger in the direction of the nearest beer bottle and shot glass, he nodded. Returned with a Natty Bo and the rye, swept up my dollar with a meaty fist. Silent transactions, my favorite.

I sipped the whiskey, took a long draw of cold beer, lit a Lucky. Inhaled like a pearl diver about to go under—the Russians, damn them, hadn’t smoked during my interrogation, which meant I hadn’t been able to light up either.

That takes you back—National Bohemian, better known by its nickname, is an American pilsner first brewed in Baltimore in 1885. Some things are always in vogue. And Voigt has every reason to be shaken, to reach for booze and nicotine.

It was my duty to keep the Russians at bay, to protect our New Mexico weapons project, whatever it was, but going in by myself, without backup, had shaken me hard. What if Shovel-face had decided he didn’t like my answers, what if he had orders to “take care of” that troublesome naval intelligence officer who kept turning up like a bad penny?

Too many what-ifs, not enough whiskey.

It’s a classic setup, an American agent operating somewhat in the dark but patriotic and stoic in equal parts. Voigt is a particularly appealing character because when he ponders what might have tipped off his Soviet spymasters, he realizes he might have inadvertently left a trail of breadcrumbs that could endanger civilians. He can’t let it go. One young man especially troubles him: Kenny Newhurst from the Automat, a teenager who witnessed Voigt’s meeting with a compatriot. It takes a while for Voigt to really bear down on protecting Kenny because the Soviets distract him in the age-old way—they send in a dazzling dame to the tavern. The morning after their brief encounter, Voigt has second thoughts.

The more I thought about the scene, the more it felt like a setup. Mara had glided from Champ to my bed in all of two hours. Maybe some girls pounced that fast, but not a well-bred deb like her, not for a lieutenant junior grade like me. Another clue: the note with her number. High-class Southern girls went to finishing schools where they perfected their cursive, but Mara had block-printed. Sound tradecraft, that—never leave a handwriting sample. Finally, the way she’d made love.

It’s quite a reflective morning after for Voigt. He realizes that if he brought Mara home again, she’d dope his drink and “the Russians would give [his] flat a real wringing, toss it from top to bottom, while [he] snored, naked and flat on my back.” Time to hit the road. But his quintessentially American streak of do-goodism is at odds with his double-agent mantra (protect the operation at all costs). Lieutenant Ellis Voigt cannot leave a man behind, so instead of instantly going underground, he reaches out to Kenny’s family. When he finds out Kenny didn’t show up for work at the Automat, he stages a one-man rescue. Old Shovel-face has Kenny tied up. Voigt to the rescue?

Odds I could pull it off, ten to one. But I had no choice except to try.

The Russians Voigt deals with are out of central casting. One wonders if they are operating on two levels—ham-handed thugs in plain(ish) sight with sophisticated handlers behind the scene. Voigt’s superior, career Navy man Paslett, chews him out for the mess he’s gotten them all into, but he understands what was behind Voigt’s decisions. Still, D.C. is too hot for Voigt. The powers that be send him to New Mexico. There’s a spy to catch, and Voigt’s the man for the job.

The snappy, authentic-sounding 1940s dialogue, an appealing American everyman, and a cast of characters of which none seem trustworthy give Rip the Angels from Heaven a breakneck pace that never lets up. It doesn’t hurt that the plot has a ripped-from-the-headlines effect; there’s a thin line between fact and fiction, and David Krugler straddles it masterfully.