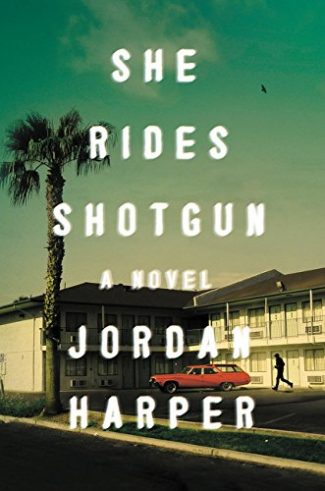 She Rides Shotgun by Jordan Harper is a propulsive, gritty novel about a girl marked for death who must fight and steal to stay alive, learning from the most frightening man she knows—her father.

Jordan Harper is a Missouri native who’s been fascinated with crime since childhood, likely due to a familial involvement in law enforcement. He’s been both a film critic and journalist and has written for television (“teevee”); he now makes his home in Los Angeles. Harper published a short story collection, Love and Other Wounds, before the release of his full-length debut, She Rides Shotgun—a 2018 Edgar Award nominee for Best First Novel. The book has been optioned for film, with Harper attached to write the screenplay.

When 11-year-old Polly McClusky walks out the front doors of Fontana Middle School in southern California, the last person she expects to see is her father, Nate. Last Polly knew, he was still in prison—his home for half of her young life—for armed robbery. Meanwhile, she’s been rendered an outcast, bullied (“Polly Pudding-Ass”), and ignored in equal measure. Her solace comes in the company of a stuffed teddy bear that she carries in her backpack. Nate’s unannounced arrival is immediate cause for concern, as is the expectation that she’ll leave with him. Despite her reservations, she knows better than to ignore his command: “Listen close … You’re coming with me. Right now, no time for fuss.”

Father and daughter are a seeming study in contrasts, both in appearance and temperament. Nate is bold and brusque to Polly’s meek and mild. The one thing they have in common, at least to the casual observer, is their “gunfighter eyes.” But beneath Polly’s reserved exterior is a depth of darkness—which is something she’s come to recognize in herself, even if she can’t yet summon it forth:

Polly read about this pearl planet with a storm inside it and the thought burped full-formed out of Polly’s brain: I’m from Venus. That was the way Polly felt, that outside she was quiet and calm but inside her acid winds roared. She’s never known why she’d been that way, so quiet on the outside but inside so screaming loud, but now she knew.

In snippets of overheard conversation, Polly begins to piece together the ugly truth about her father’s reemergence. Her mother and stepfather have been killed—but it’s more complicated than that. Their deaths were the result of a hit put out by the Aryan Steel, a prison gang that’s got a gripe with Nate; further, both Polly and her father have a bounty on their heads. Consequently, they are forced to live on the run, stealing for survival and fighting for their lives. And though her grief bubbles just under the surface, there’s little time to indulge it. Instead, Nate begins to teach Polly the same lessons that his outlaw brother, Nick, imparted on him before dying—such as the art of taking a punch and how to use a bat as a weapon. She then becomes an unlikely accomplice in their crusade to negate the contract issued by Crazy Craig.

The result is a kill-or-be-killed thriller that dares you to blink. (You’ll want to, but you won’t.) And while the themes are undeniably dark—and punctuated by overt acts of violence, sex, and corruption—there are also moments of redemption and revelation, of love and loyalty. There’s the light that comes when you step out of the shadow and the constant threat of being eclipsed. Nowhere is this more evident than in the progression of the father-daughter relationship. Polly is able to channel her inner strength outward, while Nate begins to soften his core; there is an eventual honesty that neither could have imagined and a reciprocity between learning and teaching. And while these transformations are subtle, they also heighten the risks immeasurably. After all, once you’ve laid your emotions bare, you are vulnerable to the consequences.

At its heart, She Rides Shotgun is a coming-of-age story that doubles as a crime drama. There’s an underlying sense of realism and grittiness that grips you by the cojones and doesn’t let go. Kudos to Jordan Harper for writing raw and resilient to achieve that—and for unselfconsciously embodying Polly in all her anxious complexities. She is truly a protagonist for the ages, all too human and yet entirely out of this world.