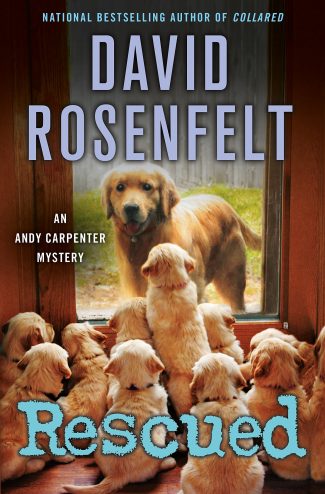 Rescued by David Rosenfelt is the 17th book in the Andy Carpenter series, featuring the charm and wit readers have come to expect from sardonic Andy Carpenter and his team as well as a case with stakes that have never been higher.

I always have a Pavlovian response to the news that David Rosenfelt has published a new book in his wildly entertaining Andy Carpenter series. Our hero Andy is a defense lawyer who is independently wealthy, meaning that he only needs to take the few-and-far-between cases that he wants to take. Or, in this instance, the case that his wife, the lovely ex-cop Laurie, wants him to take.

Andy wouldn’t normally hesitate to do Laurie’s bidding, despite his occasional threats to not renew his license. Granted, he’s a little busy with his animal welfare foundation—his true passion, after his family—and their current task of trying to re-house the dogs found in the back of a tractor-trailer at a rest stop. The driver, who was bringing them north from overcrowded shelters in the south, was found shot to death inside. Family, of course, always comes first, but as soon as Laurie mentions the new client’s name, Andy finds himself wishing he really had retired when he had the chance:

That in itself would make him my hated nemesis.

But it’s worse than that.

It was a serious relationship; it lasted almost two years.

But it’s worse than that.

He broke up with her.

Besides the obvious fact that breaking up with Laurie makes him the single dumbest human being on the face of the earth, so dumb that he should be watered twice a day, I don’t have much more information about him.

Well, Andy’s about to find out more than he ever wanted to! Turns out, Dave was the one who shot the truck driver who’d been transporting all those dogs. He’s pleading self-defense, however, saying that the driver, Kenny Zimmer, had lured him out to the rest stop by claiming to have important information on one of Dave’s active cases. Dave is a private eye, though no longer licensed after beating up none other than Kenny several years previously. Kenny had gloatingly admitted to molesting an underage girl, and Dave had taken matters into his own hands after Kenny got away with it.

So he was pretty surprised to get Kenny’s call offering help. Being no fool, he went to the meeting armed but didn’t draw his gun until Kenny came swinging at him with a knife. As soon as he saw what he’d done, he went home to write a note for the police, then came straight to the Carpenters, using his ongoing friendship with Laurie to ask for Andy’s help.

Of course, the police aren’t buying the self-defense angle, and Dave is soon arrested and charged with murder. Andy reluctantly agrees to represent his wife’s ex, but he soon finds himself embroiled in a murderous conspiracy that has already claimed other lives and reputations. If he’s not careful, it might even claim his own.

Andy is such a terrific protagonist. He’s hilariously self-deprecating and exceptionally clever, investigating his clients’ innocence and eloquently defending both them and the truth in court. Imagine, if you will, a modern-day Perry Mason who is also actively involved in animal welfare. But it isn’t all work and dogs for our Andy—he also enjoys his sports and hanging out with his son, Ricky. In Rescued, he’s finally coming to terms with the fact that Ricky will never fulfill Andy’s dream of becoming dad to a baseball superstar after Ricky’s Little League coach relegates an enthusiastic-but-lacking-in-talent Ricky to right field:

For a while I blamed the coach and searched for a solution. I had options; for example, I could have moved our family to another city and, therefore, a different Little League team. Or I could have asked [my colleague] Marcus to kill the coach, or at least see to it that he was hospitalized and had to be replaced.

But Laurie made me see the light, probably by telling me that I was an idiot and a lunatic. It also helped that Ricky was so obviously having fun. So if he can’t be a major leaguer, maybe he can do something lesser but also important, like doctor or college professor.

After the game, I tell Ricky how well he did, and specifically do not mention that he has killed my life’s dream.

Rescued is another entertaining mystery novel that really takes some surprising twists and turns as Andy sets out to clear Dave’s name. Andy and his crew are as vividly written as always, and I was kicking myself for not realizing earlier who the criminal mastermind was. I’m already eagerly and greedily awaiting the next book in this witty series!

Read an excerpt from Rescued!