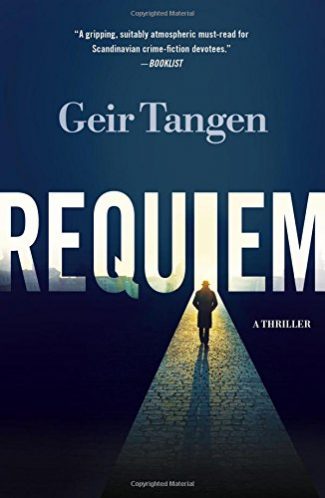 Requiem by Geir Tangen is a debut novel and the first in the thrilling Gudmundsson and Skeisvoll series.

This debut crime novel is authored by a Norwegian crime book blogger. Since the beginning of its publishing journey, Requiem has been sold in 15 countries. It’s good to note a bit of the novel’s background early because Geir Tangen’s influence is evident within its pages. An avid crime and suspense reader—especially one who loves Norwegian thrillers like those of Jo Nesbo—will recognize some of the plot twists, but Requiem will keep you guessing until the very end. Tangen supplies viable suspects along the way but executes twists and turns that will keep the reader on their toes even through to the last 10 pages. Lotte Skeisvoll and Viljar Gudmundsson are relatable characters, and as much as the reader is following along to find the killer, their stories are a focus as well.

An anonymous email sent to Viljar Gudmundsson is a bizarre curiosity—sent to the police merely to cover his bases—but it’s just the beginning of a dark and twisted game. Chief Investigator Lotte Skeisvoll knows that the sinister player at the other side of the computer screen is calculating their moves and leading them down a dark path. But both journalist and investigator will be forced to face their metaphorical demons before they can track down this real one.

Gudmundsson is an infamous journalist who has already experienced his heyday. His work now is nothing more than fluff for an editor he hates. He also struggles with anxiety, an aspect of his life that he attempts to keep hidden, which isn’t incredibly difficult when he keeps himself so isolated that he can count both friends and family on one hand.

Skeisvoll is a born detective. Her extreme attention to detail and relentlessness have resulted in her reaching chief inspector by the young age of 30. But her focus takes an extreme form in her personal life. It’s well known that she is living with obsessive-compulsive disorder, which leads her to rewrite notes from a crime scene if in the wrong ink or to eat the exact same meal at the same time every day. Her only family is her younger sister, who is in and out of Skeisvoll’s life thanks to a drug addiction that keeps her on the streets.

The relationship between the two is interesting in that, personally, they seem to have no relationship at all. They are aware of each other as one local journalist and one chief detective may be aware of each other, but there’s no camaraderie. On the Venn diagram that is Requiem, Lotte is on the left, Viljar is on the right, and their circles experience a slim overlap that includes the case. So unlike most thrillers, we get to see the story unfolding from two completely different sides but don’t have to follow the two main characters into a shared personal life. The reader is instead treated to two completely different worlds. Think Law & Order, where half of the time the story is told through the investigation, while the other half is told through the prosecution and in the courtroom. In Requiem, it’s half journalistic research and half investigation.

Rather than being told simply through the alternating points of view, the novel also includes the viewpoints of secondary characters as well as flashbacks. The penetrating viewpoints of various characters (many unreliable) help keep the reader on their toes.

Requiem is a love letter to Norwegian crime novels and the novelists who write them. Tangen’s inclusion of familiar tropes and scenes is clearly in reverence. More than relying on the familiar in terms of subject matter, a little Googling reveals that the setting is as close to home for Tangen as it gets—the town of Haugesund, Norway, is where he is actually from. The reader will also find Geir Tangen eventually using himself as an enjoyable plot device, really throwing a wrench into any theories they’ve come up with.

In an attempt to keep the reader guessing, the novel does seem to feature many trails that lead to dead ends. Clues are often presented and then thrown out the window for the next possible clue. Some may find it a bit exhausting, and the novel may leave one feeling a bit winded. But the surprise is definitely worth more than the steady and somewhat predictable plots of other thrillers. Overall, Requiem is an entertaining read, and Tangen has introduced protagonists that readers will want to see more of in the future.

Read an excerpt from Requiem!