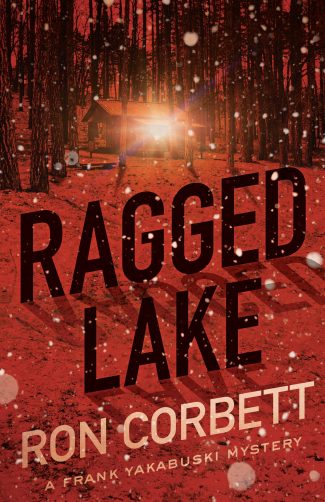 Ragged Lake by Ron Corbett is the first book in the Frank Yakabuski Mystery series—a richly atmospheric mystery with sweeping backdrops, explosive action, and memorable villains that will keep you guessing about the violent crime, the nature of family, and secret deeds done long ago on abandoned frontiers.

As Ragged Lake opens, the reader is immediately drawn into the jarring event that took place during the dead of winter in a remote town, where an entire family was slaughtered in their isolated cabin. This scene gives way to the introduction of Frank Yakabuski, the main character of the novel, who takes on the investigation and becomes deeply engrossed in the Town of Ragged Lake. Ron Corbett uses this murder to craft a novel that quickly evolves from a simple investigation into something more. Tying together the lives and journeys of both the murdered family and the inhabitants of Ragged Lake.

While a suspicious murder in a secluded forest is enough to draw me in, one of the things that kept me most intrigued throughout this book was not the suspense—although there was plenty of this—it was the way Corbett artfully describes every scene. From the outskirts of Ragged Lake to the neighboring woodlands, the abandoned mill and even the fishing lodge, Corbett goes into great detail while adding an emotional film to each portrayal.

This is most notably seen when Yakabuski describes his travels—when he is venturing on the 10-hour expedition from his home in Springfield through the snow-clad forests towards Ragged Lake, and then again when he arrives, reflecting on what the ghost town had become since he first visited in his youth.

Yakabuski suspected that if he took a photo of Ragged Lake today, it would look archival. Right from the outset, he’d be looking at something lost. Out of focus. Half-forgotten. The town had that sort of feel to it, the same feel other mill and lumber towns had these days. When he was in them, Yakabuski felt like he was walking around in the past tense, everything around him retreating and moving backwards.

Without specifically referencing a time or exact location, Corbett still manages to paint a picture in the reader’s mind, transporting them to a place that exists in both the past and present. Existing in this plane is something that occurs throughout the novel, continually shifting the reader between the current murder investigation and back to the beginning of the victim’s story—who they were and why their lives brought them to Ragged Lake and ultimately to their death.

While Corbett connects the readers to the scenery of the story, he also makes sure to add an air of mystery to each character.  Similar to the Town of Ragged Lake, all its inhabitants are a bit lost in their own way. One of the most memorable examples of this, in my opinion, can be seen in one character’s journal, as she describes an interaction with her therapist:

That’s right. I haven’t. Never told you about Sean Morrissey or Tommy Bangles, and I like to think that helped you. If there was ever a knock on your door late at night, that might have helped you.

I don’t know if such a thing ever happened. I like to think it didn’t, but who knows? Maybe the consequences of what I have done with my life have been rippling out for years, and I just don’t know about it. I’m like some faraway shore.

The way this novel manages to develop both the characters and the setting is something that many crime thrillers lack, preferring to rely heavily on the suspense to draw the reader in. Corbett, on the other hand, successfully achieves both. Ragged Lake is an altogether captivating novel that cleverly strings together the lives of strangers and entraps them in a dangerous web that extends far past the borders of this forgotten town.