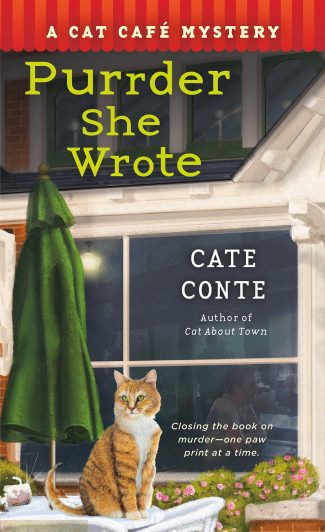 Purrder She Wrote by Cate Conte is the second book in the pawsitively charming Cat Cafe Mystery series set off the New England coast, where curiosity leads to some killer small-town secrets.

Take a visual tour through Purrder She Wrote with GIFnotes!

Last summer, popular cozy author Liz Mugavero (the Pawsitively Organic Mysteries) marked a new chapter in her career with the publication of Cat About Town—the first book in her Cat Cafe mystery series written under a pen name: Cate Conte. After revisiting her roots with Purring Around the Christmas Tree, the author—who serves on the Sisters in Crime New England board and is a member of Sisters in Crime National, Mystery Writers of America, and the Cat Writers’ Association—returns to pseudonymous offerings with Purrder She Wrote.

As the story opens, protagonist Maddie James—co-owner of Daybreak Island’s first cat café, JJ’s House of Purrs—finds her grand opening celebration interrupted when one of her volunteers, Adele Barrows, engages in a verbal spat with a customer. Though Maddie diffuses this proverbial catfight before the fur really starts to fly, it has unexpected ripple effects. Said customer, snobby socialite Holly Hawthorne, is later found dead, a custom catnip toy shoved down her throat. Suspicion immediately, and inevitably, falls on animal activist Adele. And while Maddie is adamant about her staffer’s innocence, a surprising confession threatens to thwart justice and allow a killer to go free.

Further complicating matters is the fact that Maddie’s brother-in-law, Cole, was at the scene of the crime, unbeknownst to his wife (Maddie’s sister, Val). That may not make him a murderer, but it raises serious questions about his fidelity. Not a fan of his to begin with, Maddie finds herself in the unenviable position of seeking the truth for the sake of her sibling. When she witnesses a violent altercation between Cole and Adele’s nephew, Gabe—a contractor she’s hoping to hire—he also lands on her list of questionable characters. And then, there’s Adele’s fellow volunteer and protégé, Gigi, a young woman who is hiding … something. Consequently, Maddie is convinced that Adele is covering for somebody. But who? So many suspects, so little time!

Fortunately, Maddie has a few allies to assist in her sleuthing. Her grandfather, Leo, is the town’s former chief of police and thereby commands the requisite respect—now that he’s no longer a murder suspect (see: Cat About Town). Additionally, her longtime bestie, Becky, works for the local newspaper and is privy to all the gossip, and her high school boyfriend, Craig, is on the police force (though, this particular dynamic is equally likely to produce pangs than perks). She’s got help on the work front too; in addition to Leo and her volunteers, Maddie’s business partner, Ethan, has relocated from San Francisco (where they co-own a successful organic juice bar) to help oversee the cat café. There’s also a potential romantic suiter, but it’s Maddie’s trusty four-legged sidekick, JJ, who is her most constant companion. If things sound a bit crowded, they are—but in a (mostly) cozy way.

Overall, Conte fulfills the promise that she set up in her debut. With the cat café now operational, readers get an inside look at the inner-workings of a new business, which provides a nice counterbalance to the more traditional mystery elements; it also grants Maddie new associations, complications, and opportunities—all of which broaden the prospective for future feline-focused felonies. The setting is charmingly quaint, and the secondary characters are both distinct and distinctly memorable. But it’s Maddie herself who anchors the story by virtue of her good heart, her sense of loyalty, and her strong convictions. These qualities demand action, and justice results.

Cate Conte delivers a triumphant two with Purrder She Wrote, which lovingly straddles the conventions of the cozy genre while also practicing the subtle art of subversion. Both the whos and the whys are worthy of your time and attention, as is the welcoming backdrop against which these questions play out. Despite the inevitable cat-astrophes, the end result is a whole lot of fun—but with a generous and good-natured side scoop of frisky.

Read an excerpt from Purrder She Wrote!