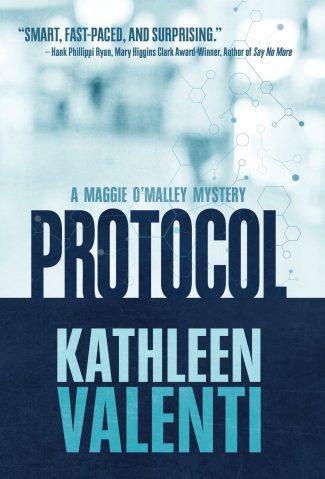 Protocol by Kathleen Valenti is the first book in the new Maggie O’Malley Mystery series.

There is something special about a new, likable, unique heroine hitting the world of crime fiction, and Kathleen Valenti’s Maggie O’Malley fits that bill perfectly. Quirky, passionate, funny, and lost in that cloud of uncertainty that everyone falls into right after college, Maggie is at once relatable and fun to read about. Protocol, the first Maggie O’Malley mystery, is the book that introduces readers to Maggie, a nuanced character that bridges the gap between quirky young females in distress and brilliant, gun-wielding women who tackle life with the strength and violence of a runaway locomotive.

Maggie O’Malley is a recent graduate facing down her first important job. She is full of ambition, hungry for success, and worried about the family and best friend she is leaving behind to pursue a career as a pharmaceutical researcher for a top company. Her mother’s death from cancer turned her life around, and now she is starting the rest of her life as a product of that change: a woman who wants to do everything in her power to save lives.

Unfortunately, things start going wrong on her first day when she receives on her new/used cellphone a reminder for a meeting she never scheduled with someone she has never met. The person she is supposed to meet is murdered that day. The freak incident happens again, telling Maggie there is more to the reminders than just a bizarre coincidence.

Meanwhile, it becomes obvious that there is something dark going on with her new employer—something much bigger than acne medicine or a few public-relations lies. The deeper her investigation takes her, the more she is threatened, and that soon leads to the entire company framing her. In the blink of an eye, the young promise is made to look like a complete failure on every possible front. What follows is a deadly narrative about pharmaceutical wrongdoings in the name of money and what one woman will do to get to the bottom of it while struggling to stay alive.

Protocol is one of those debuts that, as the start of a series, gets the job done and is full of promises for future releases. O’Malley is an interesting character with a gloomy past and enough problems in the present to facilitate rapport between her and readers. Valenti handles her with style and grace, whether she is being threatened by a killer or simply navigating her male-centric work environment, which is plagued by harassment coming from higher up. Also, there are flashes of violence that show Valenti knows what she’s doing—passages that prove there is a hard edge to her work even when most of it is closer to cozy than violent noir. Consider this Giallo-inspired morsel, which Maggie witnesses on her phone:

The man released his grip and pulled a knife from the folds of his housedress. The blade flashed, then plunged into the woman again and again. Light. Dark. Light. Dark. Until the brightness of the blade was coated in red-black blood.

While there is a lot that Valenti gets right, there are also two flaws in the novel that merit time in the spotlight, especially because working on them will lead to a very satisfying series down the road. The first is atmosphere. While the narrative is packed with tension and murder, it sometimes seems like humor reigns in places where it shouldn’t. Most of that comes from O’Malley’s best friend, a man who can’t hold a regular conversation regardless of context. For three-quarters of the novel, this character offers comic relief and plays a part in a love triangle, but in the last part of the novel, he borders on annoying. The second element is overwriting. Protocol comes in at 302 pages, but it would have worked just as well as a 200-page book. Besides the plethora of jokes, most of the unnecessary filing comes from descriptive passages that do nothing to move the story forward. For example, here is a painstakingly detailed paragraph about O’Malley eating dinner, which comes after similar paragraphs that feature her running, shedding her clothes throughout the house, and showering:

Dinner was a can of ravioli and a half loaf of bread, toasted and slathered with butter, consumed while sitting cross-legged on the couch in front of the TV. She scraped the bottom of her chipped ceramic dish with a spoon, set the dish on the coffee table, then flopped back on the couch’s cream and orange paisley cushions.

Despite these shortcomings, Protocol is an entertaining read that includes plenty of mayhem, a superb collection of pop-culture/movie references, a cute hamster, and an invented disease (Ghana necrosis) that allows the author to inject a harsh, honest critique of the pharmaceutical business into her narrative. Furthermore, it is a welcome addition to the list of female-led crime/mystery series out there and a book that announces the arrival of a new talent that will hopefully keep delivering bloody books with a great message at their core.