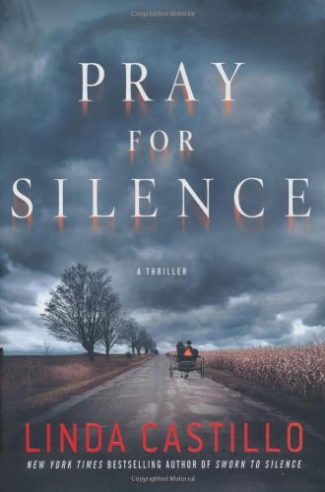 Pray for Silence by Linda Castillo is the second book in the Kate Burkholder series, where Chief of Police Kate Burkholder must confront a dark evil to solve the mysterious murders of an entire Amish family.

Criminal Element’s Linda Castillo reread was a welcome opportunity to revisit the author’s Kate Burkholder mysteries, set amidst Ohio’s Amish Country. I’d read and enjoyed her debut, Sworn to Silence—admittedly due in part to Lifetime’s casting of Neve Campbell in the role for their telefilm adaptation. Then, a steady stream of more recent books and imminent deadlines thwarted my plans to continue. So when this coverage was announced, I immediately signed up for Book Two.

Pray for Silence opens during the early morning hours when third-shift officer Chuck “Skid” Skidmore, already jittery from an overindulgence of coffee, nearly runs down a local farmhand whose screams have pierced the quiet. This man—having emerged from the shadows surrounding the Plank family home in Painters Mill—is clearly distressed and utters, “Mein Gott!” before dissolving further into shock. Though Skid doesn’t speak Pennsylvania Dutch, the sheer terror punctuating those words transcends language. Asked to clarify the situation, the farmhand responds: “Amos Plank. The children. There is blood. They are dead!”

Chief of Police Kate Burkholder is soon summoned to the grisly scene at the farmhouse where she counts seven dead bodies—two adults, two teenage girls, two boys, and a baby. While most of the family was dispatched by gunshot, the adolescent girls, found strung up in a barn, show evidence of prolonged torture and possible rape. Burkholder—who was raised in adherence to the Plain Life herself before opting out of an Amish existence—is aghast at the sadism to which they were subjected and has a rare visceral reaction to the violence that’s been done:

The thought makes me sick. The terribleness of it frightens me on a level so deep that for a moment I can’t catch my breath. I’ve never been a crier, but I feel the burn of tears at the back of my eyes … I choke back a sound I don’t recognize. A sound that echoes the barrage of emotions banging around inside me … I look at the two dead girls, and I feel the crushing weight of my responsibility to them settle onto my shoulders. I’ve heard veteran cops talk about life-altering cases. Cases that haunt a cop long after they’re closed. I’ve had cases like that myself. Cases that fundamentally changed me. Changed the way I view people. The way I perceive my job as a cop. The way I see myself … Standing there with the stench of death filling my nostrils, I know this is going to be one of those cases. It’s going to take a toll. Not only on me, but on this town I love and a community that’s already seen more than its share of violence.

Complicating matters is the fact that there is no apparent motive or suspect(s) and little evidence to direct the investigation. Burkholder believes the answers lie in the deaths of the girls, given the savagery of their slayings. This instinct is buttressed when she discovers a journal belonging to 15-year-old Mary Plank hidden beneath the floorboards in her bedroom. The diary details an illicit affair with an unnamed older man—one who may have had reason to silence Mary to ensure their secret would not be shared. Despite this intimate record of a rebellious romance, there are few specific details to pursue. One intriguing development, however, is the emergence of an older sibling, Aaron Plank—shunned by his family and community for his lifestyle choices—who has come to town seeking answers.

Burkholder—who was the victim of a sexual assault in her own formative years—finds herself unexpectedly relating to both Mary and Aaron Plank. But personal feelings seldom invigorate an investigation—and often have quite the opposite effect, clouding judgment and muddling motivations. Still, she is clear-minded enough to call in reinforcements for help. Her occasional lover, state detective John Tomasetti, has his own demons to battle—the murder of his wife and child—and is (again) on the cusp of losing his job due to dependency issues in the aftermath of that tragedy. Thrusting the two together forces them to reevaluate their relationship, amplifying the overall tension to full throttle. (The author cut her writer’s teeth in romance and delivers undeniable realism.)

Castillo admirably exceeds her assured debut with its follow-up. The pall of the crimes permeates the narrative, creating a sense of disease that never fully lets up while also spurring her protagonist to extreme lengths in the name of justice. Burkholder herself is a revelation, the perfect blend of strength and vulnerability—and her Amish roots allow her (and thereby readers) unique insights into the community that she once belonged to. Consequently, we are privy to both her sense of compassion and conflict. Burkholder’s backstory is further developed here, with one revelation bearing particular resonance with the case at hand; this hints at layers of her character yet to be unraveled.

This book is an outstanding achievement, and it’s one that entirely reaffirmed my desire for total immersion in the series. Now, you can all Pray for Silence so that I have a shot at catching up on the next seven titles before A Gathering of Secrets drops on July 10!

Brian Panowich’s Hard Cash Valley is a violent crime narrative with an undeniable sense of place and a series of unlikely protagonists that somehow coalesces into a tense, fast-paced slice of Southern grit. Dane Kirby has a decent job and a loving girlfriend, but he’s a broken man haunted by the ghosts of his dead…

Let’s raise a glass of vino to Coloradan Kate Lansing’s Killer Chardonnay and Parker Valentine, an ambitious and talented vintner. Valentine’s first name is unisex but her career choice is not: in California, America’s premier wine region, only around 10 percent of winemakers are female. Parker has been obsessed with wine making since her year…