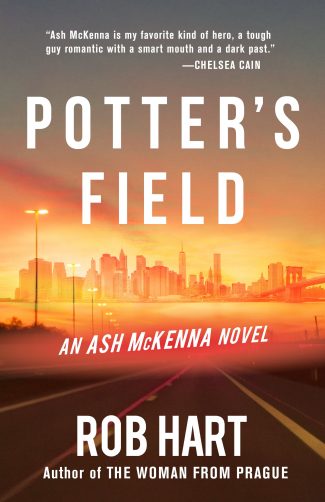 Potter’s Field by Rob Hart is the final book in his acclaimed Ash McKenna series, which shows that Ash can go home again—but it might cost him everything.

The conclusion of Rob Hart’s Ash McKenna series, Potter’s Field, brings amateur private investigator Ash back to his hometown of New York—though the Staten Island of his youth has changed along with the rest of the city. After adventures in Portland, Oregon, the woods of Georgia, and Prague, Ash is eager to get his life on some semblance of a track to normalcy. But his conscience won’t let him pass up the chance to help a missing child, even if it is at the behest of his frenemy Ginny, a drag queen criminal mastermind.

His search for the child, Spencer, who also goes by the drag name Jacqueline Coke, leads Ash into a cutthroat underworld of heroin users and dealers. As is typical, he doesn’t approach the case from a detached viewpoint; indeed, in Hart’s prose, Ash can never be detached, either from those he loves or those whose cases become obsessions for him. When he tangles with the wrong dealer, Ash not only almost dies but discovers just how addictive heroin can be—a challenging lesson for a man coming off his own myriad addictions. His up-close-and-personal insight helps guide him through the case, giving him empathy for Spencer and his high school acquaintance Timmy, also trapped in the cycle of addiction.

Heroin, though. It’s a whole new universe. And not the feeling of need that’s gnawing at me, like how sometimes I want a cigarette and I can feel a little tug in my body. That tug is there, amplified so that my skin aches.

But more than that, it’s what the heroin gave me.

I get it. Intellectually I know heroin is pure destruction. That the first high is the best and you’ll never match it, but you will end your life trying.

And knowing these things, all I want is another taste. Just a little.

Best thing I can do is distract myself.

Because there’s something else I want right now.

What makes Potter’s Field so compelling is as much about Ash’s internal struggles as his ability to defeat those eager to harm him largely using his wits and his own weapons of choice (never guns, which violate his personal code of ethics). He’s given numerous chances to simply walk away from what seems like an unwinnable battle, yet he perseveres out of a sense of duty, not so much to Ginny or even Spencer but to a higher cause. He risks his relationships with his best friend, tech wiz Bombay, and even his mother in his pursuit of justice.

Hart toys with keeping Ash clever but never too clever to stay entirely out of danger. When his plan to pose in coveralls and a clipboard to gain access to a house that may be used for heroin users doesn’t get him very far:

I get halfway down the stairs and turn. Look up.

He’s got his foot on the first stair and he’s holding a gun, pointed down, vaguely in my direction.

“No gas line on this street,” he says. “Developers cheaped out and wouldn’t put one in. We have to get oil delivered. Which is crazy, right? It’s like, we live in New York City, not fucking Appalachia. So why don’t you tell me who the fuck you are and why the fuck you’re here?” He punctuates his profanities by stabbing the air in front of him with a gun.

The power of Potter’s Field is that for every fight scene, there’s at least one, often more, of Ash reckoning with how he got into each damning situation and what his plans are to escape a life amidst the underworld—or at least turn himself into a more professional version of a P.I. He never lets himself off the hook, but he also does his best to understand the motivations of those around him, both friends and enemies.

While as a reader, I’m sad that there will be no more Ash McKenna novels, following him on his journey has been fascinating. This is a fitting culmination to a gritty, always fast-paced series.