Review: The Plot Is Murder by V.M. Burns 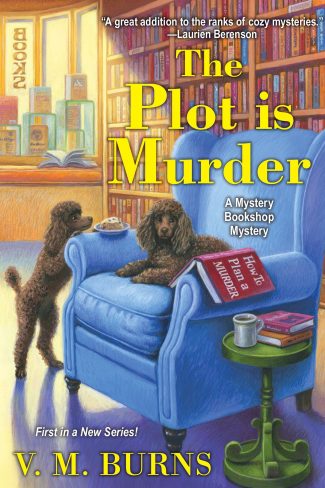 The Plot Is Murder

V.M. (Valerie) Burns was born in Northwestern Indiana and spent many years in Southwestern Michigan on the Lake Michigan shoreline before relocating to Eastern Tennessee in search of more temperate weather. She is a lover of dogs, British historic cozies, and scones with clotted cream—all characteristics she shares with the protagonist of her debut novel, The Plot Is Murder, which is a 2017 Agatha Award nominee for Best First Novel and marks the inaugural entry in her Mystery Bookshop series.

As the story opens, readers are introduced to Samantha (“Sam”) Washington, a young widow on the cusp of seeing her longtime dream of opening and operating a mystery bookstore come true despite the tragic death of her husband, Leon. Before his passing, he made Sam promise that she’d pursue that vision as well as a related passion: writing a British historical cozy mystery. With her resignation from teaching imminent and her store, Market Street Books, in the final stages of preparation for its grand opening, Sam is finding her groove despite the grief; she’s even making headway on her own manuscript. Then, the unthinkable happens: a disreputable realtor, Clayton Parker (who tried to thwart the closing on Sam’s new property), is killed in her backyard, and the cloud of suspicion inevitably falls on her.

Though Sam has two dogs, Snickers and Oreo, for protection, her sassy, gun-wielding grandmother, Nana Jo, moves in to keep an eye on things and help run the business. Nana Jo doesn’t suffer fools gladly, and she makes no bones about her dislike of Detective Brad Pitt (aka “Stinky Pitts”), whose sleuthing skills strike her as wholly unimaginative and misguided. Fortunately, Nana Jo has a cadre of lady friends, the Sleuthing Seniors (a Golden Girls-esque quartet), who are determined to get to the bottom of things by any means necessary—but especially if it means repeated trips to the local casino. Also on the scene is Dawson Alexander, a former student-athlete with a surprising culinary competence who is in need of some TLC; this particular relationship illuminates the balance of tough and tender that must have made Sam a much-beloved teacher among students and staff.

Interwoven within the narrative are sequential extracts from Sam’s work in progress—a murder mystery set in late 1930s England. This whodunit features Lady Penelope Marsh, a brainy young socialite who has lived her life in the shadow of her beautiful, dramatic, and outgoing sister, Daphne. When one of Daphne’s gentlemen admirers is killed on the family property during a party, Penelope initiates her own investigation into the case. Her intentions, while noble, aren’t entirely selfless; after all, she happens to be in love with Victor Carlston, a chivalrous chap who himself is enamored with Penelope—and has subsequently become a person of interest in the crime. The ensuing subterfuge is a romantic dramedy of errors that easily entertains without becoming excessively erudite.

While the story-within-a-story structure initially detracts—or, at the very least, distracts—from the main mystery, the charm and ease with which it’s written eventually wins out, highlighting the appeal of historical context in contemporary times. This is fitting, given Sam’s love of the genre (which mimics the author’s own reading tastes) and her desire to make such books available to customers. But it’s Sam’s endeavors—not only in clearing her name of any wrongdoing but also launching a business in the wake of personal tragedy—that prove most compelling. Like Lady Penelope, she understands the complexities of living in the shadow of a sibling, but it’s actually Nana Jo who eclipses her here, stealing scenes and the hearts of readers. Still, Sam is a likable protagonist whose sensitivity and strength are appealing, as is her desire for truth and justice.

The Plot Is Murder is a “double your pleasure, double your fun” debut that offers two mysteries for the price of one. That neither is especially complex is beside the point. What overshadows any such shortcoming is the welcoming atmosphere that V. M. Burns has loving created and the dynamic characters—both human and canine—that occupy this space with readers. A promising, and pleasing, premise with infinite potential for growth.