Review: Picked Off by Linda Lovely 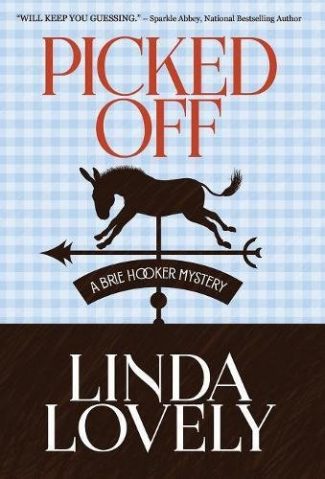 Picked Off by Linda Lovely is the second book in the Brie Hooker Mystery series.

Author Linda Lovely brings fun and frights with this second installment of the Brie Hooker Mystery series. Brie finds herself wrapped up in a scary mystery when someone ends up bloody and unconscious during the town’s Halloween celebration. The plot thickens as threats, kidnapping, and eventually murder conspire to bring this tale full circle, and Brie must help find out who’s behind it all before she becomes a victim herself.

I haven’t read the first book in the series, but I didn’t find it too difficult to jump in here. Lovely sufficiently keeps the reader up to speed with small hints about the happenings in Bones to Pick, such as with this tidbit:

My residency at Udderly Kidding Dairy began the same week Tammy, our pot-bellied pig, unearthed a skeleton. That would be a real, used-to-have-skin-attached-to-it skeleton. It was quickly identified as Aunt Eva’s unlamented missing husband.

As an avid lover of Halloween, I was very happy when the story started out with a costume party and haunted-barn Halloween event. Truth be told, I would have loved even more Halloween in this book, but I will take what I can get. There are so many fun threads that are revisited throughout the story that help keep the humor while bringing a lighter feel to break up the more serious subjects that are present. A great example is the hilarious and horny resident goats. The first scene really sets a wonderful and clever tone with its humor and showcases Lovely’s writing style and talents.

My icy fingers found the gate hasp. Last night I’d sprayed WD-40 on the hinges, hoping to silence its rickety creak. I lifted the hasp and pulled. The gate no longer creaked, it emitted a low groan. Not low enough to escape Duncan’s senses.

I ran. The metal pail banged against my calf.

I reached the trough, dumped the pail’s contents, and sprinted back toward the gate.

Duncan pounded after me. Too close. I could hear his snorts over my panicky wheezing. I jumped outside the pen and jerked the gate closed.

Duncan squealed in frustration and butted his hairy head against the wire fence.

“Ha. Beat you today, you rancid chunk of Braunshweiger.” I shouted in victory.

There’s plenty of potential suspects to keep the reader guessing, and just when you think you have it figured out, Lovely throws another wrench in the mix.

Brie’s southern dialect is hard at work with her endearing and unique phrases. They’re usually modeled after cheeses, which runs perfectly with the theme of the series and gave me a chuckle more than once. There’s also a fun love triangle of sorts between Brie and her friends Andy and Paint. It’s a different situation, though, as there’s no hardcore competition between the guys vying for Brie’s attention, and they’re all able to remain friends throughout. But as the story advances, they are both impatient to win over Brie’s attention, and Brie finds herself in a predicament when she can’t decide which of the guys to pick. Before she can make a decision, the boys come up with a unique solution that takes Brie off the hook.

Paint shrugged. “Sounded to me like Zack was saying fame and money aren’t everything. May have been trying to make his old teammates feel less jealous. I mean he dropped the subject real quick and went back to ribbing Andy and me. He also turned his charms on you, which didn’t make my day.”

Paint draped an arm around my shoulder. “Can’t pretend I don’t notice, Brie. Andy and I talked it over again last week. This ‘we musketeers’ bit is killing us. We both want you as a friend. But one day some lucky guy will win more than smiles from you. We’d rather it be one of us than some stranger—or the likes of Zack. Won’t you reconsider? Date both of us. We can handle it. Promise. Talk to Andy, he’s totally on board.”

Yowzer. Hadn’t seen that coming. An excited tingling in my gut said yippee. My uncooperative brain warned against making an important, emotional decision in the midst of a crisis.

I enjoyed this book for so many reasons. The way we attempt to solve the mystery along with the characters made me feel like I was sitting with them, hashing out the options. It was written in a way that made it very easy to relate to the characters, and Brie is a great protagonist. Being a southerner myself, I felt a bond with the setting, the characters, and their way of life, to an extent. Set around Clemson in South Carolina, it is a beautiful area and perfect for the time of year, the goat farm, and the rest of the scenery described. This is a fun read, and I look forward to reading any future installments that Lovely brings to the series.

Check out Linda Lovely’s guest post about avoiding characters who are “Too Stupid To Live”!