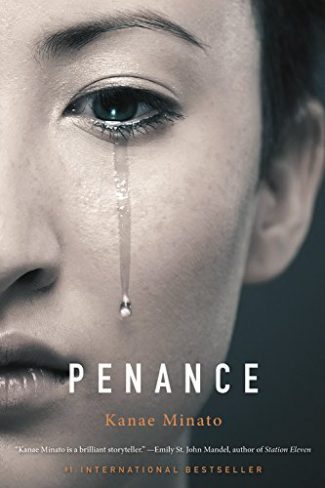 Four women, haunted by a childhood trauma. What really happened that day—and what followed, for each of them, in the years after? Penance by Kanae Minato is a dark tale of revenge and psychological drama that will leave readers breathless.

A lot of crime fiction focuses on the crime itself. However, there is a lot of fertile ground for outstanding fiction in the ripples created by crimes as serious as rape and murder. This dark space is where Kanae Minato’s Penance resides. As devastating as a murder can be for the immediate family of the deceased, there are also a plethora of individuals who feel those repercussions and whose lives can be forever impacted in deep psychological and emotional ways. By exploring this territory, Minato has crafted a novel that simultaneously works as a brutal crime narrative and a psychological exploration of the lives of four women who are forced to grow up haunted by childhood trauma.

When they were young, Sae, Maki, Akiko, and Yuko were enjoying a regular day and playing with a ball when a man approached them and tricked them into allowing their friend Emily to go with him to solve a small problem. That man raped and murdered the innocent girl and disappeared into anonymity for years. Because everything happened so quickly, the four friends were unable to offer valuable details or a description of the murderer. As a result, Emily’s mother cursed the surviving girls and asked them to find the man or do penance for being murderers. As the case grew cold and faded into the local folklore—except for those directly affected by it—the event and what Emily’s mother said after it became something akin to an emotional/psychological cancer at the core of the girls’ lives. Years later, just as the 15-year statute of limitations for the crime of murder was about to expire, the girls are forced to face the effects of the murder and the subsequent words as their own lives explode into chaos and Emily’s mother re-enters the picture one last time.

Penance is told from the different perspectives of those at the core of the devastating murder. Each girl goes on to become a young woman deeply affected by their past. What they had to suffer through became a magnifying glass for the faults in their personalities and led to a variety of problems like infidelity, depression, and even murder. A decade and a half later, they begin to see—through a lot of self-analysis—the how and why of their current situations, and it all leads back to the day Emily was murdered and the day her mother blamed them for her death. As a result, death, consequences, psychological scarring, and insecurities that were never addressed emerge as the four elements of cohesion that bring these women together and make their separate narratives work very well as a single novel.

At the center of all this are diverse voices, all of which Minato manages to make unique. The women all have their own philosophies, and they emerge as each of them tells their story. Varied as they are, they all demonstrate how the past plays an immense role in their present and how they have all forged ideas in ways that directly tie into their early years spent in a small town in rural Japan:

You shouldn’t think that everyone’s equal. Because some people are given different things from the time they’re born. The poor shouldn’t try to act like the rich. A stupid person shouldn’t try to act like he’s a scholar. A poor person should find happiness in frugality, and a stupid person do his best with what he’s capable of. Seek something above your station and it will only lead to sorrow. God is carefully watching us all and will punish you if you reach too high.

Perhaps the most important thing about Penance is that it shows that words said at the right/wrong time can have an effect as powerful, if not more so, than a murder. Losing a friend was tough, especially because the four girls found their murdered friend and had to take care of letting everyone know, but the words they heard after were what truly became a haunting ghost that refused to vanish into the past. Maturity and knowledge show them the truth, but recognizing what the problem stemmed from does nothing to assuage the destruction it brought to them for so many years:

“Did you ever really consider what effect this passing emotional outburst of yours would have on children? After you moved back to Tokyo, didn’t you completely forget all about it in a couple of days?”

There is a very large interstitial space between criminal acts and their impact on those involved many years after. Minato navigates that space comfortably and shows how everything is connected and how humans are capable of feeling crippling guilt over things they didn’t do. Ultimately, this makes Penance a novel that is as much about a horrible murder as it is a deep, crushing exploration of culpability, growth, pain, and the way one act can add layers of chaos into the already complicated transition from girlhood into womanhood.