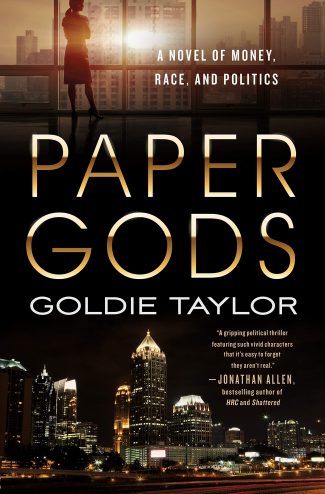 Paper Gods by Goldie Taylor is a political thriller where the mayor of Atlanta and a washed-up reporter investigate a series of assassinations and uncover a conspiracy that reaches into the heart of the city’s political machine.

Power comes in many different forms. There’s the political power that comes from winning an elected office, economic power that comes from being so wealthy you buy off the people who make and enforce the laws, and the power that comes from having both money and a willingness to harm those who would take it from you. Those different types of power flow through a city and occasionally even intersect. What happens though when they violently collide in a struggle to determine the fate of a city with a rich and bloodied history? That’s the central question that fuels Goldie Taylor’s fascinating new political thriller, Paper Gods.

The bedrock of any story is a solid cast of characters, and in Paper Gods, Taylor gives readers not one, but two compelling protagonists. The first is the Mayor of Atlanta, Victoria Dobbs.  She’s brilliant, cunning, wealthy, beautiful, and genuinely cares about her constituents. So she’s an easy character to root for, but what makes Dobbs especially fascinating to read about is she’s also a deeply flawed and nuanced character. Dobbs’ incredibly volatile temper rears its head many times in the book. Her anger is often righteous, but when she gets mad, she explodes. Early on in the novel a family member confronts her over the way she ordered the police to take down a violent criminal she and responds by saying:

“This is my city!” she screamed. “And if I have to blow that motherfucking house up myself, this ends tonight!”

At another point in the novel, she learns something shocking about one of her husband and attacks him with a pressure washer! What really made Dobbs an intriguing character for me though is learning exactly what she’s capable of. Over the course of the novel, Taylor gives us a series of shocking and organic revelations that illustrate just how dangerous Victoria Dobbs is. I’d go into more detail, but I don’t want to spoil any surprises.

Read an excerpt of Paper Gods!

Taylor’s other protagonist is Hampton Bridges, a man trying to make sense of the wreckage of his life. He was a superstar reporter who broke a story about Dobbs’ brother being connected to criminals and then was injured in a drunken car crash. So, like Dobbs, he’s a flawed person, but his determination to better himself makes him easy to root for. When we first meet Bridges, he’s lost his wife, his ability to walk, and is barely holding on to his job. His only real companionship comes from an editor who believes in him and his faithful Golden Retriever, Inman.

Hampton poured a mound of dry food into one dish and filled a second with cool tap water. Inman watched intently now, his tail wagging with delight. The dog’s marvelously light brown eyes, the way he loved him better than anyone else, made Hampton feel as if there was at least some good left in the world.

There’s also no love lost between Bridges and Dobbs at the beginning of Paper Gods because of the reporter’s story about her brother, but when a sudden wave of violence erupts, they’ll be drawn back into each other’s orbits as they launch separate investigations into a mysterious cabal of powerful and dangerous people. Those separate investigations involve interactions with a robust cast of supporting characters. My two favorites were police detective Sal Pelosi who is Dobbs’ driver, most trusted confidant, and an expert at navigating morally murky situations; and Chanel, a mysterious woman with ties to both a U.S. Congressman who is assassinated in the opening chapters of Paper Gods and the  moneyed interests who control the purse strings of Atlanta politics.

The city of Atlanta is also a major character in Paper Gods and I think that’s where the novel particularly shines. I’ve visited the city once over 20 years ago, but Taylor’s prose makes me feel like I’m a resident of the ATL. Her descriptions bring to life the city’s landmarks, wealthy enclaves, and impoverished neighborhoods, but she also gives readers a real sense of the city’s history and the forces that shaped it:

Atlanta was two cities in one: one black, one white. One sat north of I-20; another lay to the south. One of them controlled the ballot box. And the other held its purse strings. Winning in a citywide election always meant cutting a grand bargain.

So, with Paper Gods Goldie Taylor blends a compelling city, flawed and fascinating characters, and morally murky situations into a potent, fun, and fast moving story.