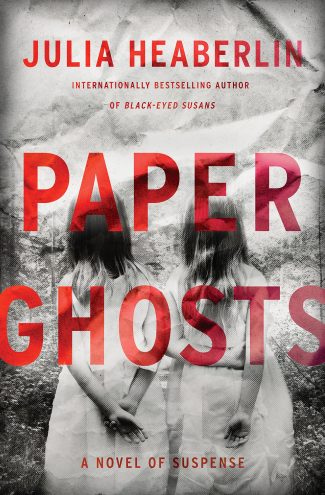 Paper Ghosts by Julia Heaberlin once again swerves the serial killer genre in a new direction—one where you won’t see the final, terrifying twist spinning your way until the very last mile.

Julia Heaberlin has a reputation for creepy suspense, but she takes it up a notch (and then some) in the eminently quotable Paper Ghosts. Our unnamed—well, she’s eventually named, but I have to keep some things a secret—heroine (anti-heroine?) is only 24, but the disappearance of her older sister Rachel 12 years ago has shaped her in a profound way. So much so that she’s been obsessed with finding Rachel’s (possible) killer—or at least finding out why she disappeared, since no body was ever found.

She finds a photo taped to the underside of the basement stairs in her family home, which kicks off her interest in famous photographer Carl Louis Feldman. She becomes convinced that Carl had something to do with her sister’s disappearance, as the photographer was linked to a number of other murders. He’s her prime suspect, and she’s finally tracked him down to a halfway house. Carl claims to have dementia, but she’s not so sure.

I wonder what Carl is thinking. Maybe about how he’d like to kill me. I’m twenty-four, in the age range. White. Slender. People say I look like my sister. The difference is, she was lit from the inside. Dramatic. Gutzy. A performer. People drifted to her. Loved her. Carl drifted to her, and snatched her life.

Maybe he thinks I am my sister come back to haunt him.

I am the understudy, Carl. A shell of her, loaded with dynamite, set on revenge. The nervous one in the wings about to jump onstage. You and I, we will be co-stars.

I am also a perfect stranger every time I come here, or he’s lying. Each time, he claims to forget my name. He won’t answer when I ask why, in June, he is wearing a Christmas tie leering with Grinch faces, or tell me where he bought his leaden, ancient boots, or the prettiest place he remembers they last took him. Boots always remind me of vistas. Of standing firm and steady on a dangerous precipice while beauty unfolds for miles before your eyes.

Our narrator is paying close attention to Carl’s every move, and she’s convinced he’s faking much of his condition. But that’s ok because she’s trained for this. Literally. I’ll get to that later, but this lady is prepared. Or she thinks she is. Eventually, even though Carl doesn’t believe for a second that she’s his long-lost daughter, he agrees to a road trip.

Carl calmly tugs a square of yellow paper out of his pocket and begins to unfold it. “I want to hear you say it.”

“I need to know if you’re a killer. As your daughter, I need to know what kind of blood runs in my veins. You owe it to me.” The first and last line, at least, are true.

“That wasn’t so hard, was it? So we’re clear this trip isn’t about bonding or breathing fresh air. If you were really my daughter, you would have told me that from the start. You would have talked about how you don’t want your babies to be killers. You would have cried big tears. And you would have gotten out of here just as fast as you could. That’s what normal girls do.”

But she’s anything but normal, and Carl agrees to the trip, with caveats. Also, he’ll do just about anything to get out of the halfway house. She’s got everything planned down to the tiniest detail, and it’s taken her a long time. But she really didn’t plan on Carl. He’s definitely … something. What follows is a surreal Texas road trip, hitting most of the places where Carl’s supposed victims were taken or died, designed to tease info out of Carl and hopefully pigeonhole him into admitting he killed Rachel. Cat and mouse indeed. But who is the cat, and who is the mouse?

Here’s the thing: Carl is charming. At one point, he startles the crap out of his chaperone when he rushes off into the brush to rescue a small dog, and boy does he keep her on her toes. It’s hard for her to reconcile this possible serial killer with this odd dog lover who, even if he may be faking some physical symptoms, actually appears to see “ghosts.” Two of them, in fact, and he even talks to them. But she’s very, very devoted to her cause, and their search leads them to a cabin in the piney woods where a few answers await. But they’re not what she expected, and neither is Carl.

Like I said, she trained for this. Intensely. She actually found someone on the Dark Web that would put her in dangerous situations and teach her how to get out of them. She takes dedication to a whole different level. She also takes obsession to frightening levels. Half her life has been devoted to finding out what happened to her sister, and it’s taken a toll, emotionally and physically. Her grief is all consuming. Even a romance with an FBI agent that worked her sisters case (don’t worry, it didn’t start until she was about 19), one that she would have liked to have continued, was smothered by her need for answers.

Paper Ghosts, a title referring in large part to the images in Carl’s haunting photos, works on multiple levels. It’s an effective thriller, but it’s also a deep look at obsession and the destructive nature of grief—as well as a creepy-as-hell tour of some of the oddest places in Texas. Heaberlin’s prose, at times, approaches a kind of gritty poetry as she takes readers on a very unusual murder mystery tour with a very unusual narrator.

If you think you know where this one is going, you’ll need to check those expectations at the door. Set aside some time for this one because you won’t want to put it down.