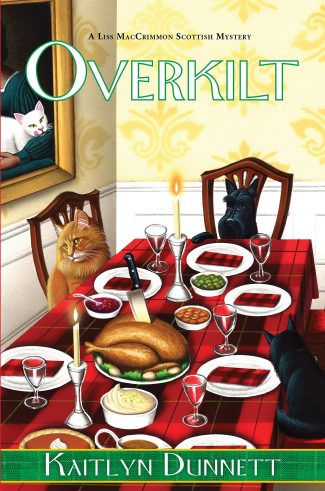 Overkilt by Kaitlyn Dunnett is the 12th book in the Liss MacCrimmon Mystery series.

Liss (née MacCrimmon) Ruskin is a former professional Scottish dancer who runs the Scottish Emporium in Moosetookalook, Maine. The fictional town of Moosetookalook is in the Western Maine Mountains. Small New England towns need tourists who are enticed to visit by a mixture of compelling scenery, cozy country inns, and off-the-beaten-track shopping.

What a difference a new marketing campaign makes to The Spruces, Moosetookalook’s Victorian-era country inn. Indisputably, New England has a compelling charm in the fall. But what happens during the stretch after the leaf peepers go home, the trees are bare, and snow hasn’t started falling?

Innkeeper Joe Ruskin, Liss’s father-in-law, looks to fill beds before ski season by running a Thanksgiving Special to attract “an untapped niche clientele,” specifically “childless couples who don’t want to celebrate Thanksgiving with their families.” What could go wrong? Local “crackpot” Hadley Spinner, the “leading light of the New Age Pilgrims,” Moosetookalook’s homegrown cult, is not a fan. Spinner says the Special “is an affront to family values.” Liss’s husband, Dan, asks his dad what the beef is.

He’s got it into his head that most of the guests taking advantage of the Thanksgiving Special are unmarried or same-sex couples. According to him, I’m encouraging immorality.”

Liss just stared at him. There was so much wrong with Spinner’s complaint that she hardly knew where to begin.

“How did he come up with that notion?” Dan asked. “It’s not like you’re even allowed to ask for people’s marital status or sexual orientation when they book a room.”

The three of them think that Spinner would soon “move on to annoying someone else,” but alas. Hadley Spinner posts “venom-laced online” missives that eventually go viral and reach a very wide audience. Most commenters want “Joe and his entire family tarred and feathered … and worse.” Spinner demands a boycott of the local shops that do business with the inn and announces that his followers will demonstrate in the town square. Liss resolves not to fall into a funk.

It’s overkill, she thought, and then had to fight a smile as an even better word occurred to her. Given the business she was in, Spinner’s campaign against Moosetookalook Scottish Emporium was best described as “over kilt.”

Liss and her fellow shopkeepers are furious when a tourist bus is engulfed by an angry mob of picketing demonstrators. As far as Liss is concerned, “the merchants who counted on the tourists on that bus spending money in Moosetookalook have every right to be upset.” Ever the optimist, however, Liss pops in some earbuds and ignores the chanting outside. Unfortunately, she is interrupted by her well-meaning mother pounding on the door. Vi is very upset. Liss attempts to calm her down with a cup of Earl Grey, but Vi is not to be placated. She saw something in the gloaming. Liss is hard-pressed not to yell at her mother.

Liss moderated her volume, if not her tone. “Stop evading my question. What did you see that upset you so badly?”

Hadley Spinner won’t be leading any more demonstrations in Moosetookalook. The next morning, a state police detective shows up on Liss’s doorstep. This isn’t Liss’s first rodeo murder: she’s quite prepared to saddle up and help the authorities.

She hadn’t liked the man, but no one deserved to have their life cut short by a vicious killer wielding a knife.

Detective Gordon Tandy accepts a cup of coffee, but things go downhill from there. Liss’s husband had gotten into it with Spinner, as had a few of her close friends and acquaintances.

Overkilt is an engrossing story of an intelligent woman—and, surprisingly, her side-kick mother—champing at the bit to solve a crime while the authorities prefer they keep their noses out of it. When Vi tells her daughter that “there is no need to bring in a private investigator when you are so obviously the best person for the job,” nothing can keep Liss from following each and every clue.