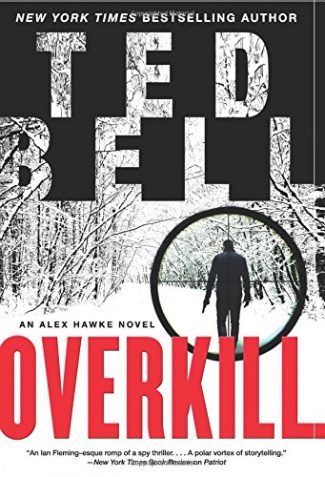 Overkill by Ted Bell is the 10th Alex Hawke novel, where the counterspy puts it all on the line to rescue his kidnapped son, pitting him against Russian President Vladimir Putin in this action-packed thriller.

Overkill is a spy thriller that operates on a tightrope high above the Swiss Alps. Alex Hawke’s work and personal life crash together in an excruciating fashion—his young son Alexei is kidnapped, and the president of Russia, Vladimir Putin, is on the run, amassing weapons and power as he attempts to claw back into power. The two events are intertwined, and the stakes could not be higher.

Only one man can smash the Russian president’s plan for domination—a master counterspy who will cross every line to save his son … and maybe save the world itself in the bargain.

Overkill is the 10th in Ted Bell’s Alexander Hawke series (although it is not necessary to read the previous nine to get up to speed). Realpolitik is the name of the game. Urban Dictionary’s definition of “overkill” is particularly apt: “More than what is needed. In gross excess of what is reasonably expected.” As if to underline the chilling title, Overkill opens with an epigraph by Vladimir Putin: “When you’re dead, people stop trying to kill you.”

Beneath a chocolate-box exterior and brilliant blue skies, Switzerland is a country armed to its teeth because of its geographical position in Europe. Overkill describes the Swiss attitude toward war: “Know all about how to fight a war … so that you never have to.”

Historically, it stems from the fact that Switzerland is at the crossroads of all the important routes through the Alps—directly in the crosshairs of any invading emperor, Nazi despot, or, just possibly, a deposed Russian president desperate for Swiss gold.

Speaking of a “deposed Russian president,” Vladimir Putin is on the run. He left Russia, ostensibly abdicating in the face of a Kleptocracy, but not really. He’s a fighter. His enemies know that and repeatedly try to assassinate him. Putin’s pilot, Andrei, a man who has saved his life countless times, turns on him when the jet is in French airspace. Miraculously, Putin finds the strength to fight back and escapes by parachute even though he’s exhausted. What stops him from collapsing on “the cold metal cockpit floor”?

The scene switches to St. Moritz, a place now stripped of its former “jet-set luster.” Even the royals have left the scene. Exhibit A: Sarah Ferguson and her former husband Prince Andrew own a chalet together in Verbier. Who goes to St. Moritz now?

The currency of St. Moritz is no longer fame and glamour but money: “Cold, hard cash. Gobs of it. And most of it, if not all, was in the wrong hands.” Nothing can take away from the beauty of the Swiss Alps, though, “when the Alpine skies above were shot through with blue and brimming with bright promise.” A darling little boy, all of seven, and his dashing father, Lord Alexander Black Hawke, are set to enjoy Christmas Day on the slopes. Then, the unthinkable happens: their cable car comes to a jerky stop while the skiers inside dangle “thousands of feet above the jagged rocks below.”

Ted Bell’s perspective shifts seamlessly between Lord Hawke (the 6th wealthiest man in the world) and Vladimir Putin. Putin, on the run for weeks, is unrecognizable. Bearded, smelly, and gaunt, he draws on reserves stoked from his peasant heritage: “I am become the ploughhorse.” His pithy quotes underscore his strength, his Russian sense of irony, and his resilience.

Hawke cannot find his son in the hospital where the Swiss rescue helicopters took the stranded children. Fearing the worst, he reaches out for help. Like Jake and Elwood, he’s “putting the band back together.”

They find out two critical pieces of information: Putin is alive (knowledge gleaned through “a beep generated by Putin’s encrypted sat phone”) and a Swiss rescue helicopter was stolen six weeks earlier. Hawke recalls an earlier conflict between himself and Putin where Putin lost and he won. Did he? Like the Evil Fairy in Charles Perrault’s Sleeping Beauty, who laid a curse on Princess Aurora at her christening, Putin has the last word.

But you hear this, Hawke. The second you walk out that door, you will no longer enjoy my benevolent protection. Nor will your beloved son, Alexei, be safe, Alex.

Hawke’s invaluable advantage in his struggle with Putin is that he knows his enemy. In the words of Chinese military strategist and philosopher Sun Tzu, “If you know your enemies and know yourself, you will not be imperiled in a hundred battles.” Let the games begin.