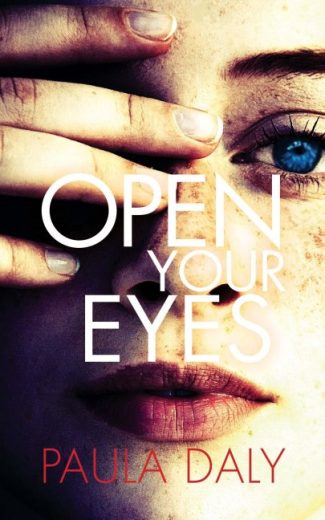 A warning: I dare you to start this one late at night, because you’ll stay up all night to finish it. I know this, because I pretty much did. I’ve read a few of British author Paula Daly’s books, and really enjoyed them (especially The Mistake I Made) and this one is her best yet.

Jane Campbell is a young wife and mother of two young kids, as well as  a writer who has been trying to get published for going on ten years. It hasn’t done much for her self-esteem, and although she teaches creative writing part time, it does nothing to fill the void. It doesn’t help that her husband, Leon, is a wildly successful crime author. She’s proud of him but watching his success while she stagnates has taken its toll. Nonetheless, she loves him wildly and adores their kids, Martha, barely three, and four-year-old Jack. If life isn’t perfect for Jane, she’s happy enough, but it all changes when they pile into the car to visit Leon’s mother for his birthday.

Before they can pull out of the driveway, they’re confronted by their elderly neighbor Lawrence, who has had it in for them since last summer, when they’d went on vacation and made an unforgivable error, at least in Lawrence’s view.

It seemed we’d made the staggeringly grave error of leaving my car on Lawrence’s side of the street for Three Whole Weeks while we were away. What we should have done, according to Lawrence, was to leave my car in our own driveway, the single space usually occupied by Leon’s car. This would have shown proper consideration to the other residents and of course would have been the right thing to do.

We apologized. We didn’t see what the big deal was but we were new to the area and didn’t want any acrimony. We pretended we were sorry. We sent flowers to Rose, who was rather distressed after having been forced to look at my car for almost a month, and we did our utmost to placate them.

This time Lawrence is upset because the Campbell family cat, Bonita, is crapping in their flower beds and Rose is practically fainting from the stress. Leon has just about had enough of them, however, and he’s not in a placating mood. When Leon asks Jane to run into the house to grab a few more beers to take on the trip, Jane is happy to oblige: she has no wish to hear the argument as it rages on. After taking a bit more time than she usually would, she heads back out to the car and right into a nightmare.

I climbed into the passenger side and fastened my seat belt. Leon was staring straight ahead, still with that hint of madness in his eyes that he got whenever he had to deal with Lawrence, so I said, ‘You’re not going to carry this on all day, are you?’

‘You’re ignoring me now as well?’ I continued crossly. ‘What the hell did I do? It’s not like it’s my fault that Lawrence always—’

Without speaking, without checking his mirror, Leon stamped on the gas.

And the car flew backwards.

I cried out in terror. Cried out because my first thought was: Are the kids strapped in? Are they safe?

There was no time to check.

But by now we were already stationary again. The car having smashed into Lawrence’s garden wall behind us.

Leon’s forehead was on the steering wheel and he was unresponsive.

The children began to cry.

What follows, frankly, is akin to a waking nightmare for Jane. Leon has been shot in the head with a nail gun, and he’s put in a medically induced coma after surgery. Who could have done this horrible thing to him? Was it Lawrence? Jane doesn’t like the guy, but he’s in his 70s, and she can’t imagine him doing something like that, not over a cat. While Leon is in the hospital, Jane must juggle the children and figure out how to get through this while worrying about the aftermath of Leon’s injuries. She’s also, in the eyes of the police, a suspect. What she learns is shocking: they’re out of money, and Leon never finished his last novel. Not only that, but he seems to have pissed off some very nasty people.

Luckily, Jane has a support system in her mother and Leon’s family, but when Leon is finally brought out of his coma, the nightmare only intensifies. Leon’s recovery is slow and painful, and Jane is devastated by just how much Leon has hidden from her. I don’t want to say much more, but this book is a corker. Jane is intensely sympathetic, and she must gather all her strength, because Leon’s writer’s block is only the very beginning of their troubles. Daly crafts a powerful, and at times, genuinely creepy, domestic thriller. She also realistically and sympathetically tackles the sometimes-horrifying realities of traumatic brain injury, and there are some genuinely heartbreaking moments between Jane and Leon in the unimaginably difficult aftermath of his injury. This is a superb effort from a fiercely talented author.