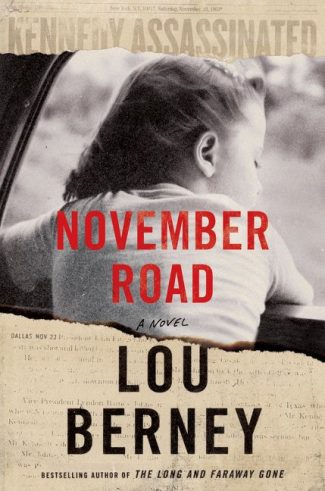 Lou Berney set the literary world ablaze with his 2015 novel, The Long and Faraway Gone, which garnered effusive praise and earned accolades including the Edgar, Macavity, Anthony, and Barry Awards, as well as the Oklahoma Book Award for Best Novel in 2016. His previous novels include Whiplash River (2012) and Gutshot Straight (2014); his short fiction has appeared in The New Yorker, Ploughshares, and the Pushcart Prize anthology, among other publications. Berney makes his home in Oklahoma City. His newest, November Road, is one of the most anticipated titles of the season and was chosen as The Lead Read by its publisher, William Morrow.

Read our review of The Long and Faraway Gone!

As the story opens, readers are introduced to charismatic hustler Fred Guidry—a loyal street lieutenant to Mafioso Carlos Marcello, infamous boss of a New Orleans crime family. Despite having friends in high places, Fred—who was dispatched to Dallas on an errand less than two weeks before President John F. Kennedy’s assassination—begins to suspect he’s become a liability. After all, other Marcello associates are turning up dead at an alarming rate, and it reeks of conspiracy and cover-up. No stranger to life on the run, Fred agrees to do damage control for the Don but quickly goes rogue, hoping an old ally in Las Vegas will help him neutralize the threat.

Meanwhile, Charlotte Roy, mother of two, has grown disillusioned with the state of her marriage. While her husband, Dooley, isn’t a bad man, he is a weak one whose alcohol dependency has wreaked havoc on their finances and sense of overall stability. In a rare moment of resolve, she packs up Rosemary and Joan and charts a course to California, where she hopes to find temporary refuge with an estranged aunt and start a new life. But road trips are notoriously unpredictable, and circumstances render her and the girls immobilized in Santa Maria, New Mexico. Fortunately, a seemingly benevolent stranger by the name of Frank comes to their rescue, offering them a ride to their final destination.

While Frank initially sees Charlotte and her daughters as his perfect cover from Marcello’s nationwide network of eyes and spies (and Charlotte an attractive conquest), he soon begins to develop genuine feelings of affection, if not love, for them. Though cautious, Charlotte, too, becomes undeniably smitten. She finds in Frank the kind of man she’s always wanted; meantime, Frank finds within this version of himself the kind of man he’s always wanted to be. And while that might sound like the stuff of a happy ending, it’s not. The hired guns are closing in, and Frank realizes that he’s just drawn three innocents into a dangerous, deadly game.

While the narrative begins with the dual storylines of Frank and Charlotte (as well as that of Frank’s pursuer, Barone) it’s the intersection of these two that marks a dramatic ratcheting up of tension, stakes heightened by the risk of collateral damage due to their relationship. Kennedy’s assassination, though subtly handled, hovers over the proceedings like a specter; there’s both a palpable sense of uncertainty and foreboding as well as that feeling urgency which causes people to act on impulse rather than logic. Consequently, the inherent incongruity of Frank and Charlotte’s coupling are largely muted. Barone’s own passage is punctuated by moments of violence and vindication, further underscoring the idea that there is no clear-cut black or white (or bad or good), but rather varying gradients of gray in which these characters exist.

November Road is a transcendent, immersive novel that melds elements of many genres—crime, travelogue, and romance among them—seamlessly against the backdrop of a nation divided. The characters’ journey is both a figurative and literal one and epitomizes both the pursuit of the American Dream and the ideals (internal and external) that we all strive for, no matter how out of reach they may seem. Consequently, the obstacles to attainment are not just flesh-and-blood ones but the memories of our own failures and frustrations, which represent a haunting of the most insidious kind. Fortunately, hope remains as the great equalizer.