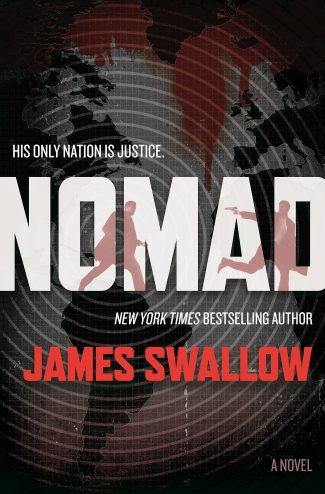 As secret agents go, Marc Dane is more reluctant than most. The protagonist of Nomad—the first entry in James Swallow’s new series of technothrillers—Dane actively shuns field service. He’s part of the support unit for an MI6 strike team, more comfortable at a console and manning a drone than in the field with gun in hand.

But then, Dane survives an ambush that kills the rest of his team and quickly discovers that he’s been blamed for the attack. On the run and with few resources and fewer friends, Dane surprises himself, as well as the MI6 agents and other shadowy figures pursuing him, by becoming a shockingly effective field agent.

Nomad puts Dane through his paces, shuttling him from chase to chase, with occasional pauses for interrogations, shootouts, and maybe a bit of rest. This relentless pace is one of the book’s best qualities—Swallow’s plotting is deft and the nonstop action gives the book a propulsive quality that’s hard not to like. That’s even when Swallow indulges in the usual technothriller excess, with detailed descriptions of firearms, weaponry, surveillance gear, and other items weighing down some tense moments.

Rather than answer, Marc broke into a sprint across the quad, back toward the Land Rover. As he moved, he heard the echo of the drone’s engine. It was turning, gaining height. That first low-level pass had been to scope out the target. The next approach would be rolling in with weapons hot. Marc knew the Avenger UCAV could carry a reconnaissance package, a load of 250-pounder bombs or—as this model did—clusters of lethal AGM-114 Hellfire air-to-ground missiles. Even a near-hit from one of them would be enough to bring an explosive end to Marc Dane’s fugitive odyssey.

And yet, the over-stuffed paragraphs and sprawling story never hinder the action. As Dane struggles to clear his name, he learns that there’s a mole in MI6; that the mole is working for the Combine, a clandestine cadre of villains bankrolling international terrorists; and that the Combine has partnered with terrorist group Al Sayf (“The Sword”) to launch a massive strike on American soil. Swallow shifts perspective from Dane to his bosses back at MI6 to Sayf leader Khadir, with occasional stops to focus on other characters of varying relevancy. Even this unnecessary fat isn’t enough to stop the momentum, and it’s a testament to Swallow’s skill with plot and action.

Nomad will feel familiar to readers of Tom Clancy and Robert Ludlum, and in this way, the book is very much an old-school throwback, despite all the modern tech and references to PRISM, Edward Snowden, and WikiLeaks. There are hints of TV series like 24 and Homeland, too, and despite the rocket-charged plot, there are few surprises. The heroes and villains are who you expect, as are the various twists and turns. There’s one exception—a scene that plays out in a truck stop on Interstate 95—that gives Nomad a surprising bit of heart.

It’s something the book could use more of. The strength of a series like this rests on its hero, and at least in this initial book, Dane is lacking in charisma and gravitas. He’s no Bourne, Bond, or Jack Ryan. He admits this often but somehow always manages to out-class agents and assassins leagues above him in terms of skill.

He wasn’t an agent, he was a tech guy, a back-seater who had a gun but never fired it in anger. This escape, all of it, had been on blind luck and happenstance! They were going to catch him. He was going to be found and disappeared …

Marc put his hands on the table and laid them flat to stop them shaking. With effort, he metered his breathing, staring fixedly at the space in front of him. Inside him, there was chaos, and Marc Dane looked right into it.

Dane is hyper-competent to a fault, but beyond that, he’s a blank. There are hints of a past tragedy that kept him out of field service, but Swallow is apparently saving that thread for future installments. Dane’s motivations are revenge for his team, keeping his sister safe, and, well, that’s about it. He’s got no interests, no past, and no personality. When killing time in a bolt-hole and reflecting on what he misses about his utilitarian flat in London, he thinks only of his collection of Blu-Rays—but Swallow doesn’t even do the courtesy of giving Dane a favorite movie. Ultimately, Dane’s less interesting than his allies, a Queens-born ex-Army sniper and her boss, an enigmatic billionaire who was a child soldier in Africa. Nomad comes to life when those characters step into the spotlight, which is good for the reader but not so promising for Dane.

Ultimately, Nomad is technothriller comfort food. It’s a good first effort from Swallow, who up to this point has been a well-received tie-in novel writer for franchises like Star Trek, Doctor Who, and Warhammer 40,000. Nomad is Swallow’s first step outside his usual genre, and like his protagonist, he makes some missteps—but there’s enough potential to keep readers hooked.

Read an excerpt from Nomad!