Review: No Cure for the Dead by Christine Trent 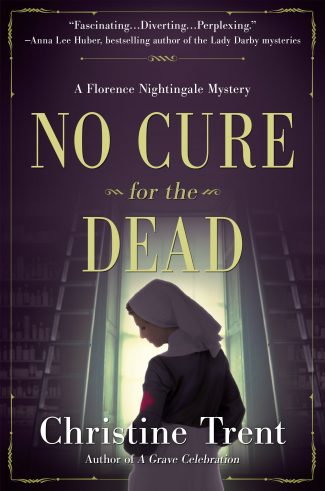 No Cure for the Dead

The first novel in the Florence Nightingale Mystery series imagines the famed Lady of the Lamp as an amateur detective—a perhaps unsurprisingly easy stretch given how renowned she was for her intelligence and determination. It is 1853, and Florence has yet to acquire the fame that will come with her dauntless service in the Crimean War. As No Cure for the Dead opens, she is still in London and is a week into her new position as superintendent of the Establishment for Gentlewomen during Temporary Illness—a hospital with a powerful and wealthy committee of patrons. Standards are not quite as high as she would like, and she’s kept busy not only with patients but also with trying to whip the staff and premises into shape. A reading alcove in the Establishment’s library is her refuge when she needs time to decompress, so it is particularly horrifying for her when she finds the hanged body of one of her nurses there. Worse, she soon realizes that Nurse Bellamy’s death was staged to look like a suicide but was really cold-blooded murder.

The police have different ideas, however, and are happy to write off the death as the final act of a hysterical woman, lack of evidence for this conclusion notwithstanding. Florence is outraged but is given pause by the thought that accepting their verdict would make life much easier for her on many fronts. Heaven knows, her job is hard enough as it is:

Of course, if I chose to agree with Sergeant Goodrick’s assessment that it was merely a suicide, it might go more favorably for me with the committee.

I actually considered this for several moments. I suppose it is a basic human instinct to shield and protect oneself.

However, a desire for justice is another human instinct, one that I hoped would always devour the selfish desire to preserve the self.

I sighed inwardly. No, I could not walk the easy path. I would have to do what I could for this poor woman.

Florence’s moral rectitude is on full and impressive display as she tangles with poorly trained staff, obstreperous patients, and scandal-averse patrons in addition to a remorseless killer who will do anything to avoid detection. Facing pressure and resistance at every turn—and in one instance, mortal danger herself—Florence forges ahead using the gifts that made her a pioneer in the field of nursing to unmask a murderer.

No Cure for the Dead is both a fascinating and convincing portrait of the famed historical figure that seamlessly incorporates a murder mystery into the known biography. Christine Trent has clearly done her research, and her Florence Nightingale springs off the page for me in a way that I found far more relatable than in any other writings I’ve encountered on the Victorian heroine. I also really enjoyed all the period detail, from the rather terrifying state of best medical practices to the pervasive social opinions of nursing itself. These last are beautifully illustrated when a middle-class matron deigns to lower herself to the profession upon the death of her bedridden husband. Mrs. Gilbert shows up at the Establishment and protests after Florence works to disabuse her of her notions:

“Miss, a nurse just sits and watches the patient and brings him some food and maybe serves up some physic prescribed by the doctor, which is always delivered by the chemist.”

I clasped my hands together in front of me. “Not in my hospital, Mrs. Gilbert. I have plans to train up women to become not just caretakers of the ill but healers of them.”

Mrs. Gilbert’s expression returned to incredulity. “That is simply ridiculous. Decent women won’t do such work. You’re fortunate enough that a respectable woman like me has graced your doorstep. Don’t think I don’t know what most nurses are like. Mucking about with wax and leather [to make medicinal plasters]—it’s preposterous and I’ll not be part of it. I’m certainly not that destitute that I need to reduce myself to such circumstances. I’ll go and live with my cousins first.”

I went back to the door and swung it open wide. “Then that,” I said firmly, “is exactly what you should do. Good day, Mrs. Gilbert.”

Caustic and upright but not without humor or sympathy, Florence is a force to be reckoned with as she applies her keen mind to solving a murder in the course of successfully running a hospital in an age that had little faith in her methods or her person. Given her circumstances, I’m rather surprised she wasn’t involved in criminal detection in real life. This novel successfully convinced me that she might have been, and I’m really looking forward to reading more of this excellent blend of fact and fiction as the series progresses.