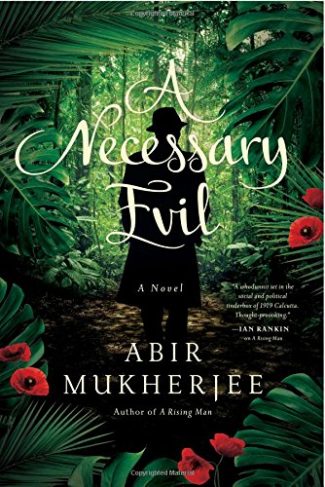 A Necessary Evil by Abir Mukherjee is the second book in the Sam Wyndham series set in India, 1920, where Captain Wyndham and Sergeant Banerjee of the Calcutta Police Force investigate the dramatic assassination of a Maharajah’s son.

I threw open my door, but before I could move, the man in saffron had stood up. He had wild eyes between dirty, matted hair, an unkempt beard and what looked like streaks of ash smeared vertically on his forehead. In his hand an object glinted and my insides turned to ice.

“Get down!” I shouted to the prince while fumbling with the button on my holster, but he was like a rabbit hypnotized by a cobra. The attacker raised his revolver and fired. The first shot hit the car’s windscreen with a crack, shattering the glass. I turned to see Surrender-not desperately grabbing at the prince, trying to pull him down.

As the next two shots rang out, I knew they would find their mark. Both hit the prince squarely in the chest. For a few seconds he just stood there, as though he really was divine and the bullets had passed straight through him. Then blotches of bright crimson blood began to soak through the silk of his tunic and he crumpled, like a paper cup in the monsoon.

Captain Sam Wyndham and Sergeant Surendranath “Surrender-not” Banerjee of the 1920’s Calcutta Police Force find themselves in hot water when a quick drive with an Indian prince ends in an assassination.

Read our review of A Rising Man, Book #1 in the Sam Wyndham series.

It couldn’t come at a worse time: the Viceroy is desperate to get the royals of India to join his “Chamber of Princes,” an Indian version of the House of Lords that the British hope will keep the increasingly fractious country under their thumb for a while longer.

Naturally, the Viceroy wants nothing more than to sweep the whole incident under the rug. The assassin’s saffron robes make for an easy explanation: Prince Adhir of Sambalpore was clearly killed by religious zealots. No need for the Calcutta Police Force to investigate further and disturb the waters.

But Wyndham and his loyal protégé know it isn’t that simple. Prince Adhir had told them mere moments before he was gunned down that he’d received ominous warnings within his own palace. And the assassin’s gun also points back to Sambalpore.

The Commissioner employed them as throwaway words—as though the letters and other indications of a deeper conspiracy were to be tossed to the breeze and forgotten about.

But I couldn’t just forget about them; they would lodge in my brain like stones in a shoe. I fretted over them with the compulsion of an alcoholic going after his next drink. Because to me they represented truth untold and, by extension, justice denied.

I was keen on justice. Always had been, but more so these days after the war. One thing it had taught me was that there was precious little justice to be found in this world, and anything I could do to further its ends was probably a good thing.

So, bucking official orders, Wyndham and Surrender-not head to the royal kingdom, rich with tigers and diamonds, under the pretense of accompanying the prince’s body home. Aided by the slain man’s closest advisor, Colonel Arora, the pair begins digging into why a seemingly beloved modernizer would have been killed by one of his own.

What was the motive? The prince wasn’t overly pious, but he wasn’t known for offending the local temples—why would religious zealots attack him?

Was someone upset that he was wooing an Englishwoman? Was the idea of a white maharani so appalling that it fueled an assassination plot? Could the prince’s first wife have planned everything? Or perhaps it was his brother, the next in line to the throne, impatient to don the mantle of Maharaja with their elderly father so ill.

Then, the royal accountant, an Englishman named Golding, disappears after asking Wyndham for an early morning meeting. Is this a simple case of greed and embezzlement after all?

The deeper Wyndham and Surrender-not dig, the deeper the conspiracy grows. Courtly intrigue is always dangerous and juicy, but especially so in India, where hundreds of concubines hide in the zenana, the Maharaja maintains a fleet of Rolls-Royces, executions are carried out by elephant, and tiger hunts prove more dangerous than expected.

Abir Mukherjee’s India is vibrant and vivid, beautiful in its richness and real in its gritty poverty and wild landscape. With Wyndham and Surrender-not venturing into Sambalpore, we get both the big city of Calcutta and the jungle landscape of the royal palace.

The monsoon. Far more than just rain, it sustained life, brought forth the promise of new birth, broke the heat and vanquished drought. It was the country’s saviour, India’s true god.

It had been building for some time now. The staccato showers that always preceded it had come and gone, and the barometer, thermometer and anemometer all pointed to this being the real thing. The natives at least were in no doubt. They rushed out into streets and turned their heads skyward.

The rain began to fall more rapidly: a growing percussion on the rooftops as the wind picked up, swaying the trees in the street and carrying the scent of marigolds on its breath.

This being 1920’s India, there’s plenty to be said about colonialism, British rule, and the sovereignty of the native kingdoms. The political commentary is woven into everything, though never overpowering the central narrative.

More overt is the clash and divide between white and Indian. Wyndham may be our hero, but even he struggles with racism and preconceived stereotypes, particularly when it comes to Adhir’s romance with an Englishwoman. His own romantic desires towards the half-Indian Annie Grant notwithstanding, the idea of a white woman loving an Indian man is hard for him to swallow.

And, as Wyndham discovers through the course of the investigation, the women of Sambalpore hold more power than many would assume. Yes, they are often cloistered in the royal zenana, where only other women and eunuchs are allowed entrance. But that doesn’t make them entirely voiceless or helpless…

I do wish Surrender-not—an interesting character with incredible potential, a Brahmin raised by an atheist father, a Harrow-educated Indian who is adorably shy around women—had a larger role, or was even our narrator. Wyndham is a decent enough protagonist, but the mystery genre is rife with white, British detective heroes, whereas heroes like Surrender-not are in short supply.

Still, A Necessary Evil is an entertaining police procedural, made all the more exciting by its setting and colorful characters. It’s a compelling, quick read well worth an afternoon or two.