Review: Mycroft and Sherlock by Kareem Abdul-Jabbar and Anna Waterhouse 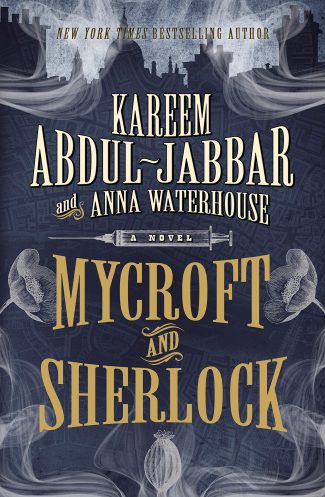 Mycroft and Sherlock by Kareem Abdul-Jabbar and Anna Waterhouse is a clever pastiche in the world of Sherlock Holmes that expertly captures the tone of the originals while creating a world all their own.

A few years ago, I suggested Kareem Abdul-Jabbar and Anna Waterhouse’s Mycroft Holmes to my book club because I thought it sounded like the kind of mystery that was accessible to readers of varying tastes. The general opinion was that it was a solid novel that put forward an entirely plausible adventure starring Sherlock Holmes’s older brother as a young man alongside said brother’s best friend, the 40-something-year-old Trinidadian Brit, Cyrus Douglas. I quite enjoyed that tale of detection and adventure across two continents, and I expected more of the same with the sequel Mycroft and Sherlock. What I did not expect was a book that has easily become my all-time favorite Sir Arthur Conan Doyle pastiche (that doesn’t involve overtly supernatural elements anyway—G. S. Denning’s Warlock Holmes series is unparalleled in that category).

A large part of this, I believe, is in the way our authors have boldly filled in the blanks of the Holmes brothers’ lives—particularly their childhoods—in a feat of biographical extrapolation that proves how much they know and love the canon. I also appreciated how young Sherlock—in these pages, still at university—was even more unapologetically obnoxious than in Sir Conan Doyle’s stories. His callow youthfulness rang far more truly than in books that try to make him relatable by softening his edges.

In sharp yet convincing contrast is the depiction of Mycroft as a young man who, after suffering the heartbreak of the previous novel, is slowly calcifying into the sedentary curmudgeon familiar from the original stories. But not quite yet—there are still physical heroics to be had here! In both these and less-taxing pursuits, he finds able assistance in Douglas, who in these pages feels like an even more natural companion than before, his shrewdness clarifying for the reader Mycroft’s emotional and intellectual evolution:

“These few years have created a change in you,” Douglas said, refusing to be distracted from the subject. “You are no longer the carefree young man riding through London on horseback, always a hair’s breadth from calamity. Now you sequester yourself within that carriage of yours, curtains drawn, nose buried in economics. I am not faulting you,” he added when he saw his friend’s expression darken. “But as an older ally, one who went through heartbreak at least as great as yours, I wish you were less … dour.”

“I shall take your advice into consideration, Douglas. I always have and always will.”

“I infer that you gain no true sense of accomplishment from solving mysteries,” Douglas went on. “That you would rather use your considerable gifts to wield power, to barter it, and eventually to consolidate it.”

Mycroft, after all, is nothing if not self-aware, a trait which is a large part of his contrary charm. And while Douglas serves as his foil, the older man is given much freer rein in the narrative than his counterpart, Dr. John Watson, in the original stories. While Watson pretty much existed only in relation to Sherlock, Douglas is his own man, with charitable and business interests that provide the impetus for the case at hand. A young boy who came to Douglas’s school for apprentices dies of the deliberately administered overdose of an unknown drug, leading our heroes to a conspiracy that could threaten the very foundations of life in Victorian England.

It’s fascinating to watch Mycroft and Sherlock try to hide their independent investigations from each other in an elaborate dance of lies and half-truths. It’s also fascinating to see how the mores of Victorian England dealt with people of different races, from the Chinese student of medicine who fascinates Mycroft to Douglas himself, who often has to pretend to be less educated and wealthy than he is in order to conform to the expectations of white society. Here, he adopts an island patois in order to fool an unexpected customer into believing he isn’t the owner of the luxury goods shop where he was just giving orders to the white man who serves as his front:

Bowing and waving, Douglas walked past the customer, opened the door and paused just long enough to hear the man say, “A workman so well attired? Never seen his like! Almost thought he was … but of course that’d be absurd, like a—a jabberwocky!” Delighted by his own cleverness, the customer set down his portmanteau while Douglas shut the door behind him and hurried down the stairs.

He hadn’t felt the chill in the air before this. He looked up to see if the clouds had thickened or grown more ominous, but no. The sky was the same: all bark, no bite.

Douglas, you old fool, he remonstrated. Forty-three years on this earth, and still so easily stung?

Mycroft and Sherlock does an excellent job not only of humanizing its titular characters but also of delving into the emotions of those who, unlike our heroes, are forced to pretend to be less than they really are. It depicts situations that are less modern than universal, and in so doing updates the canon by presenting us with newfound depths, both to the characters and to the situations they find themselves in. I absolutely loved this book (and definitely see it in my book club’s future).