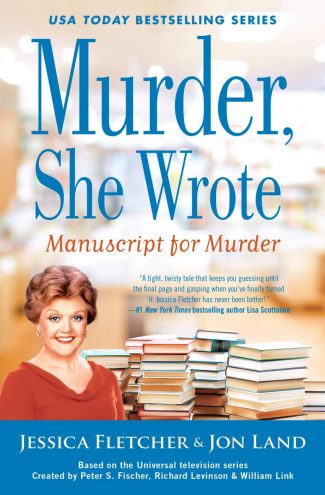 Jessica Fletcher investigates a mysterious manuscript with deadly consequences in the latest entry in the USA Today bestselling Murder, She Wrote series…

Jon Land is an accomplished and award-winning novelist in his own right—the critically acclaimed Caitlin Strong thrillers rank among his credits—and yet he had a daunting task in assuming authorship of the long-running Murder, She Wrote (MSW) series after its originator, Donald Bain, died in 2017. Last spring, Land made his MSW debut on A Date with Murder, which Bain had begun but was unable to complete; all the titles carry fictitious scribe Jessica Fletcher’s byline, as well. Now, Land is back with the franchise’s forty-eighth entry, Manuscript for Murder, which marks his first solo effort in the continuing adventures of everybody’s favorite amateur sleuth.

As the story opens, readers find Jessica Fletcher in New York City for a book signing at the real-life Otto Penzler’s famed Mysterious Book Shop, where she’s joined by her hometown friends, police chief Mort Metzger and doctor Seth Hazlitt. At dinner afterward, Jessica is approached by fellow writer Thomas Rudd, who unceremoniously joins the trio; he has recently been dropped by their shared publisher, Lane Barfield—perhaps a cause of Rudd’s obvious alcohol addiction, or perhaps the result of it—and claims to be the victim of Barfield’s financial malfeasance. Though skeptical, Jessica agrees to meet him the next morning—but Rudd doesn’t show, and his body is later recovered in the charred remains of his apartment.

Despite her suspicion that the fire was set intentionally, Jessica—reunited at the scene with NYPD lieutenant Artie Gelber (who fans will remember from the television show rather than Bain’s books)—follows through on her desire to meet with her longtime publisher and friend in hopes of dispelling the notion that he’s been skimming from his authors’ royalties. Jessica finds Barfield in an uncharacteristically exuberant mood; he explains that he’s acquired a secret, anonymously written manuscript that he believes is going to be an explosive bestseller, and then provides Jessica a copy, hoping her feedback will buttress his instincts. Buoyed by his enthusiasm (and momentarily ashamed of her doubts), she agrees to read the book. But before Jessica can make good on her promise, Barfield, too, is found dead of an apparent suicide.

Not one to believe in coincidences (particularly when it comes to multiple deaths in rapid succession), Jessica investigates. She soon discovers that everybody who has read the manuscript—which is excerpted throughout the narrative, as a story-within-a story—is turning up dead. This creates a real and imminent sense of danger, given Jessica’s possession of a copy, and a series of subsequent events confirm that her life is very much in jeopardy. The manuscript, and the circumstances surrounding its secrecy, seem to hint at a conspiracy—but real or imagined? And the extracts themselves represent a tongue-in-cheek depiction of popular genre fiction; as Jessica describes it:

Stop and think about it too closely and the absurdity of it all comes through. You have to hold on tight to something to avoid falling through the plot holes. But the book was written at a rapid-fire clip, designed not to give the readers any time to think and to involve us so deeply in the plight of the characters that we wouldn’t care about flaws that should have destroyed the book’s integrity but instead came to define it. Who wants to think when there are more pages to flip and more things to make your jaw drop?

This is but one element that Land employs to invigorate the series. Readers will also find that Jessica’s relationship with Mort and Seth is punctuated by good natured and oftentimes silly banter—there’s also an increased intimacy; Mort now refers to her as “Jessica” rather than “Mrs. Fletcher” or “Mrs. F”—and that she’s a bit more self-deprecating, both in terms of her merit as an author and her books’ popularity. As noted, there’s a heightened sense of peril, which tones down the cozy vibe and ratchets up the tension; this is a notable departure, but not altogether surprising, given Land’s reputation for propulsive thrillers. Further, the action plays out against a multitude of backdrops (including Washington, DC), melding the familiarity of Cabot Cove (which continues to evolve as a tourist mecca) with the fresh and fraught realities of the world at large. Taking such liberties with a well-established series is a risky gambit, but perhaps necessary—and one that will likely appeal to a younger audience while satisfying (or, at the very least, appeasing) longtime fans.

With Manuscript for Murder, Jon Land puts his own indelible mark on the Murder, She Wrote series, which was so lovingly rendered by Donald Bain and his wife/collaborator Renée Paley-Bain. Like all change, it takes some getting used to—but the effort is worth it, not only by virtue of the author’s merits but for the sustained literary life (and relevancy) it provides our beloved Jessica Fletcher and friends.