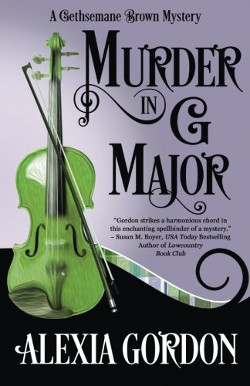 Murder in G Major by Alexia Gordon is the 1st book in the Gethsemane Brown Mystery series, nominated for an Agatha Award for Best First Novel.

Have you ever been at a point in life where nothing seems to have gone right but tucking your tail and heading back home to admit defeat is the last thing you want to do? That’s exactly where Gethsemane Brown is.

Gethsemane’s a musical genius that has excelled in her studies, earning prestigious awards and climbing her way up the musical ladder. Just when she thinks she’s gotten a fantastic job as the assistant conductor with the Cork Philharmonic in the bag, it all falls apart.

Determined not to go back home and start all over again, she stays in Ireland and accepts a position at St. Brennan’s School for Boys, where she has six weeks to steer a class of adolescents to win a high-stakes competition and secure herself a ticket back home to America. Sounds easy, right? She's also staying in the home of her musical idol, Eamon McCarthy, 25 years after his death—but in Ireland, the dead don’t always rest so easy.

Billy swallowed. “You’re, er, not afraid of ghosts, are you?”

“I can’t be afraid of what doesn’t exist.” Grandma’s stories of the farmhouse door unlocking and swinging open at three a.m. without aid of human or animal notwithstanding.

Billy swallowed again. “It’s only fair to tell ya that folks—not everybody mind ya—report hearing strange noises up here and seeing things out on the cliffs.”

“Optical illusions, misinterpretations of natural phenomena.” Gethsemane pressed her finger against the window and traced the outline of the mist-shrouded lighthouse looming atop the cliff’s head. Forget Grandpa’s account of a gray man materializing from the fog to portend death in the family. “Products of overactive imaginations stimulated by an eerie landscape.”

Carraigfaire Cottage was the home of Eamon and Orla McCarthy until Orla’s supposed murder by Eamon’s hands and his follow-up supposed suicide. Now Gethsemane is staying in Carraigfaire, and she’s not alone. Phantom scents soon give way to a full body apparition when Eamon’s presence becomes known at the cottage.

Eamon has one simple request—to clear him of the charges of murdering his wife and committing suicide by finding out who really did it. Gethsemane hesitates to get involved, but as one question leads to another, she’s soon deep into the mystery.

Gethsemane is a fantastic main character. She’s relatable, as she has truly worked hard to get to where she is in life; it wasn’t just handed to her. She’s a strong female character, and her challenges along the way—as well as her family’s—are brought to light. Her talents and her personality shine. She never gives up, and she has one helluva work ethic—provided by her family, who has their own brilliant backstory:

“Quitting’s not who I am. It’s not in my DNA. My father’s father was a brilliant cellist who couldn’t land a gig with a professional orchestra because he was black and it was the nineteen-twenties. He didn’t quit the cello and go back to tailoring, he started his own orchestra. My mother’s parents were sharecroppers. When she was born the plantation owner’s wife congratulated Grandma on the birth of ‘another little cotton picker.’ Everyone told Mother poor, black, country girls don’t get to be doctors, so she became a doctor. My father battled mental illness, hiding it so he could attend lectures in college instead of group therapy in an institution. Everyone thought he’d do well just to stay out of a padded cell, so he became dean of the mathematics department. Succeeding despite everything being against you, beating the odds, is a family tradition.” She moved to the window and stared out at the threatening clouds hanging low over the cliffs. “I don’t look good with my tail between my legs.”

As she grows closer to Eamon and dedicated to solving the mystery, we see her grow in a different way than she probably has before. She’s standing on her own, making her own way—even though it’s not easy and she could cop out by asking for money from family or friends to get her back to the States. But she doesn’t.

She also has a unique internal warning system by way of Tchaikovsky’s “Pathetique” that lets her know if things are fishy. She handles herself with a coolness when things happen, which speaks to her strengths, such as this moment when she comes to terms with Eamon’s spirit:

Her father’s professional words came to mind: if evidence forces you to reject your null hypothesis—ghosts don’t exist—you must accept your alternative hypothesis. Mother would choose option C: psychotic break. She preferred Father’s reasoning. “Ghost.” She dropped into the wing chair. “Excuse me if I take a moment to become accustomed to you.”

As Gethsemane sorts through the locals, examining each in order to find out who the killer is, more murders occur—each one inching closer to her. With no real suspects, the stakes are raised when she has a close call. It’s a race against the clock.

Author Alexia Gordon weaves a wonderful tale of murder, mystery, and the perfectly accompanying Irish mainland. I’ve never been lucky enough to visit, but her story makes me feel as if I know the village of Dunmullach. From the eccentric cast of characters to the beautiful, descriptive melodies and—one of my favorites—the poison garden at the local church, all provide a place in this well-written story. The ending left lots of loose ends to hopefully be addressed in the next installment, since this is due to be a series. I can’t wait for the next book to continue Gethsemane and Eamon’s story and to go back to Dunmullach.