Review: Murder in an English Village by Jessica Ellicott 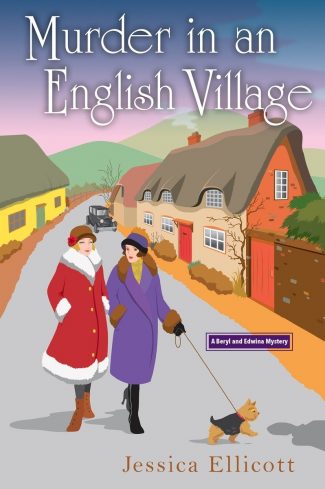 Murder in an English Village

Murder in an English Village by Jessica Ellicott is the first book in the Beryl and Edwina Mystery series featuring the unlikely sleuthing pair of the boisterous and brash American Beryl and the prim and proper British Edwina.

Miss Edwina Davenport is a genteel Englishwoman of a certain age. Prim and proper, of course, but in a slightly sticky wicket—in the wake of the Great War, her finances aren’t what they used to be.

As a result, she’s forced to place an ad for a lodger. Luckily, an old chum from her boarding school days shows up in search of a place to stay.

Miss Beryl Helliwell is everything Edwina isn’t: a brash and wild American who’s been divorced several times and has a far-flung reputation as an exciting world traveler.

The adventuress, though, has grown tired of the spotlight and is looking for a quiet place to relax and recharge—someplace where she can imbibe to her heart’s content since Prohibition is in full swing back home. Edwina’s home in the picturesque village of Walmsley Parva should be just the ticket.

But, Beryl being Beryl, life just wouldn’t be worth living without some excitement. To that end, she blithely starts a rumor that she and Edwina were intelligence agents during the War—investigators who are now looking into mysterious goings-on in the seemingly sleepy village.

“I always trust my instincts and, even though I probably shouldn’t, they’re telling me to let you in on a little secret.” Beryl leaned over the counter and lowered her voice. “I’m here answering a coded distress call from my dear friend Edwina Davenport. Perhaps you know her?”

“Edwina? A distress call?” Prudence’s mind reeled. How could a mousy thing like Edwina Davenport be friends with the likes of legendary adventuress Beryl Helliwell? Let alone involved with something as thrilling as a coded distress call. “You mean like something out of a spy novel?”

“I knew you’d understand. Ed is such a rare talent. We would have clobbered the Kaiser in half the time it ended up taking if the agency only had a few more like Ed.”

“Do you mean to say Edwina Davenport is a secret agent?”

“Shhh!” Beryl pressed a gloved finger firmly against Prudence’s lips. “The war may be over but there are still enemy eyes and ears everywhere.”

But then Edwina is attacked in her garden that very night. A local girl turns up dead. And the friends realize there really is something sinister hiding beneath the serene façade of Walmsley Parva.

Could it be connected to a Land Army girl who went missing two years ago during the War? Is black-market smuggling involved? Did an affair turn deadly? Or was a soldier more badly scarred by his experiences in the trenches than anyone expected?

As Beryl coaxes Edwina out of her shell and into the exciting world of investigation, the two ladies buck conventions and set out to prove themselves despite society’s expectations of their gender and age.

It’s not easy. At nearly every turn someone tries to discourage them. Even the local constable—a woman herself—has a low opinion of a pair of “spinsters” stirring up trouble. The entire village would rather believe the slain girl died by accident instead of malice aforethought, making the investigation tough going.

“Are you quite certain you didn’t simply catch your scarf on a low-hanging branch? After all, the entire idea of someone attempting to harm you over such obvious poppycock beggars belief. If such an investigation were to be undertaken at all, it would be unlikely for it to be assigned to a woman and certainly not one of your advancing years,” he said.

Edwina wasn’t sure she entirely liked his attitude towards her investigation. In fact, if she were to be honest with herself, she would admit he had gotten her dander well and truly up with his lighthearted dismissal of her capabilities. While she had herself protested that it was unlikely Beryl’s tale of investigatory prowess would be believed, it had not been on account of her gender or her age but rather her lack of experience in such matters.

Still, he was a man, and as such should be expected to be saddled with a predictable and unfortunate narrowness of mind.

Murder in an English Village is the first in what promises to be a light and charming series. Its greatest strength lies in its two very likable yet opposing heroines.

Edwina is very much the country mouse: sweet, demure, and devoted to her tiny terrier, Crumpet. She always has a hot cocoa before bed, enjoys pretty hats, and often engages in good-natured class warfare with her grubby gardener, Simpkins.

In contrast, Beryl is something of a vixen with her platinum-blonde hair, worldly ways, and eye for pretty men:

A tall man bent over under the hood and called out suggestions to whomever was stretched beneath. Viewed from behind, he was an attractive young man. After her last divorce, Beryl had vowed to herself she would never marry again.

At least not anytime soon.

Still, she was never one to shut her eyes when passing a pastry case simply because she wasn’t actually hungry…

She’s very much a tamer, American version of the Australian adventuress Phryne Fisher; Beryl also loves fast red cars, gallivanting around the world, and flying airplanes and hot-air balloons as the situation calls for it.

Together, Ed and Beryl are a charming odd-couple, each one bringing certain strengths to the table as they investigate the surprising number of secrets in Walmsley Parva (which is such a great name for a British village).

Author Jessica Ellicott brushes upon various heavy subjects—the Great War and the scars it left on an entire country, society’s views on “superfluous” women, adultery and children conceived out of wedlock, and of course, murder—but keeps the overall tone light and casual.

This isn’t a deeply psychological or thrilling mystery, and the big reveal at the climax feels somewhat rushed after all of the buildup. But Murder in an English Village is more about the colorful characters than the actual mystery.

Much is made about how Beryl and Edwina bring out the best in one another—as good friends always do—and their relationship is very much the heart and soul of the story. For those who can’t get enough novels centered on female friendships and strong ladies, this is definitely worth a gander.

Hopefully, Ellicott is as insatiable as Beryl and continues the series in short order.