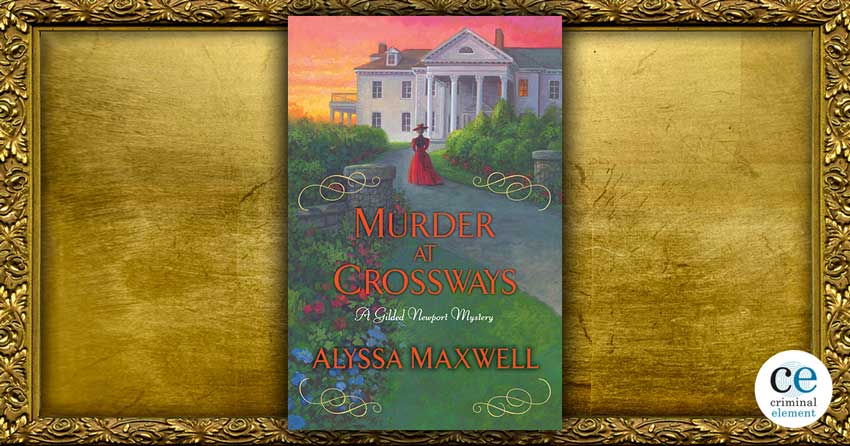 Murder at Crossways by Alyssa Maxwell is the seventh installment of the Gilded Newport Mystery series, where Editor-In-Chief Emma Cross teams up with real-life socialite Mamie Fish to investigate two similar murders around the Harvest Festival.

Emma Cross’s relaxing day at the beach with her Aunt and Uncle Vanderbilt goes horribly awry when a body is discovered on the rocks. Even worse, the dead man bears a shocking resemblance to her half-brother Brady.

Could Stuart Gale III, presumed dead after a yachting accident 30 years before, have faked his death? Could this corpse really be Brady’s father?

But Emma—a former society reporter and newly minted editor-in-chief of The Newport Messenger—can’t dwell solely on that possibly personal problem. It’s the end of the 1898 society season, and Mamie Fish, one of the three grand dames of Newport, is throwing a Harvest Festival at her new mansion, Crossways. And her guest of honor will be actual royalty, Prince Otto of Austria.

When a series of mishaps at the paper force Emma to cover the event herself, she finds herself on the scene when Otto—a presumed no-show—is found dead in the garden. Not only dead but killed in the exact same fashion as the man from the beach.

“Mrs. Fish, I’ve spoken with your husband. He’s still discussing matters with the men outside, but he said you’d want to know our preliminary findings. According to the coroner, the prince was stabbed.” His gaze briefly shifted to me, then returned to Mrs. Fish. “Once, in the heart.”

A frisson of alarm went through me, even as Mrs. Fish blurted, “Good heavens, there must be blood everywhere.”

Jesse winced at her brusqueness. “Not as much as you’d think, ma’am. He appeared to have died immediately. Though, your reflecting pool is tinged pink, suggesting the killer used it to wash the evidence off his hands.”

“Well, I certainly won’t thank him for that.” Mrs. Fish took an audible sip of her coffee.

Determined to identify the man from the beach and make sense of the strange behavior from several of the Harvest Festival guests, Emma—with the unexpected assistance of Mrs. Fish herself—sets out to unravel the mysteries.

But when issues at the paper become direr, threatening her job and the Messenger’s continued existence, and Brady falls into old, bad habits, Emma may finally find herself with too much to handle.

Murder at Crossways may be the seventh installment in the Gilded Newport mysteries, but Maxwell hasn’t lost her charm or deft touch yet. Narrator and heroine Emma remains sharp, plucky, and likable as she juggles family problems, a murder investigation, issues of the heart, and the difficulties of being a working woman in a male industry.

As always, Maxwell peppers in enough red herrings and shady characters to cloud the waters, making the killer’s unmasking unexpected but logical. Wisely, she doesn’t answer every question raised during Emma’s investigation, but she gives us enough to close the story in a satisfactory fashion.

The setting and historical details are vibrant and colorful, especially real-life figure Mamie Fish—a grand dame in every sense of the phrase—and the glittering fashions and homes of the Newport rich. The Harvest Festival itself is more than worth the price of admission.

Murder at Crossways is a light, quick read that has just enough substance to elevate it from the crowd. It’s a fine addition to a fine series, a perfect beach or vacation read for fans of historical mystery and pageantry.