Book Review: Murder at the Mill by M. B. Shaw 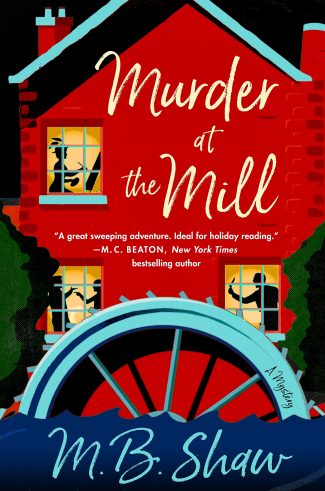 Murder at the Mill

Murder at the Mill by M. B. Shaw is the first book in the Iris Grey Mysteries series set in a picture-perfect Hampshire village.

As we gear up for the holiday season, I knew I was going to enjoy M. B. Shaw’s Murder at the Mill from the start after coming across this passage:

Across the bitterly cold water, the lights of Mill House glowed warm and inviting. Through the sash windows of the Wetherby’s grand drawing room, a Christmas tree twinkled. Gaudy and colorful, rising out of a shiny sea of discarded wrapping paper, torn from joyously opened gifts, it had clearly been decorated by children, as all Christmas trees should be. Few things in life were sadder than an ‘adult’ Christmas tree, tastefully decked out in themed colours. Where was the magic in that?

There’s something so delightfully cozy and British about the sentiment that I knew I was in for a really atmospheric treat with this series debut! Mill House is the charming Hampshire estate of renowned crime author Dom Wetherby and his wife Ariadne, a sculptor known as much for her artistic talents as for her skill as a gracious hostess. Their eldest son, Marcus, is a lawyer in London with a family of his own, while their youngest, Lorcan, is a 15-year-old with Down’s syndrome. Their middle child, Billy, has just come home from prison in time for the holidays and seems to be the only member of the family intent on ruining the picture-perfect idyll.

Portrait artist Iris Grey knows a bit about picture perfect—she’s been successful enough to have an exhibition at the National Portrait Gallery, after all. The rest of her life is in less good shape, however. Her marriage is collapsing after years of unsuccessful fertility treatments, and she’s rented Mill Cottage from the Wetherbys in order to take a breather before deciding what to do next. When Lorcan fishes up a corpse on Christmas Day, Iris finds herself drawn into the perilous business of solving what doesn’t seem, at first, to be a murder.

M. B. Shaw (pseudonym for bestselling author Tilly Bagshawe) serves up twists and turns aplenty as Iris becomes immersed not only in the Wetherbys’ family dramas but also in the gossip of village life and her own complicated romantic relationships. As she travels from Hampshire to London to Oxford to dig up clues, she finds herself slowly blossoming into the role of investigator. A large part of this, she realizes, comes from her chosen profession, as she discusses with a professor who knew the young Dom and Ariadne:

‘I’ve always considered there was an alchemy to good portraiture. Don’t you agree? There’s a certain magic to it, because of the layers.’

‘Yes. The picture you paint on the surface—the recording of the subject’s features and expressions and whatnot—and then the picture that emerges underneath.’

‘You mean the sides of people’s character that they don’t want you to see?’ asked Iris, curious.

‘Partly that,’ said the professor, ‘but also the background. The little details. Where a person chooses to be painted, for example. What room they’re in, what chair, what position. What are the objects behind them? The shadows? The clues? I always feel that the best portraits are the ones in which every brush stroke has meaning. Yes, you’re trying to capture a person, but none of us exists in a vacuum, do we?’

Iris’s eye for detail and ability to see past the surface of a person serve her in good stead as she navigates death, deceit, and unwanted sexual advances to uncover not only the whole truth of the Wetherby family but also of her own romantic and familial affairs. Portraiture is a terrific career choice for an amateur sleuth protagonist and allows for a dose of sexy glamour so often missing from the cozy genre.

Murder at the Mill is one of those rare novels that perfectly balances its complex mystery writing with a juicy yet still entirely believable personal life for its detective. Ms. Shaw knows how to write a page-turner with a thoroughly modern cast and setting. I’m also a big fan of the expertly drawn scenes from Iris’s cross-country travels, as well as what that means for the rest of the books in the series. I’m rather hoping that, in addition to traveling all across England, there will be jaunts to the continent, especially with the introduction of Iris’s estranged sister, Thea. Regardless, I’ll definitely be looking out for more books in this series!