Review: Monsters of the Week: The Complete Critical Companion to The X-Files by Zack Handlen & Todd Vanderwerff 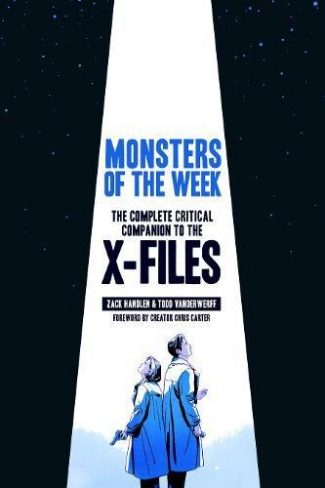 Monsters of the Week: The Complete Critical Companion to The X-Files

Monsters of the Week: The Complete Critical Companion to The X-Files by Zack Handlen & Todd Vanderwerff is the definitive guide for The X-Files, whether you’re a lifelong viewer wanting to relive memories of watching the show when it first aired or a new fan uncovering the conspiracy for the first time.

The X-Files was one part coolly deliberate throwback and one part forward-looking masterpiece. […] Week after week, it sent its two central FBI agents out into a scarier, more cinematic America than had ever been seen on the small screen. Mulder and Scully were always in search of some dark secret, some monster that needed stopping. It was a lonely series as much about an inexorably changing country and world as it was about those terrifying creatures. It was about a moral reckoning with what the United States had done to win the Cold War. And, yes, it was about the monsters themselves, ripping flesh from bone, spattering blood, and, in the process, becoming rich metaphors for a nation’s evolution.

Even if you’ve never sat down and intentionally watched a full episode of The X-Files, you know The X-Files.

You know its catchphrases—“The truth is out there”; “I want to believe”; “Trust no one”—and who the characters are and how the show helped cement so many of the “facts” of alien abductions: the stalling cars, the bright beams of light, the lost time and wiped memories, the silhouettes of spindly, otherworldly beings framed in doorways.

It’s a show that stamped an indelible mark on television, inspiring dozens—if not hundreds—of shows that have followed, from CSI to Heroes to Lost. It became a shorthand for anything weird or bizarre, a high water mark in government conspiracy and paranoia that (unfortunately) feels all too fresh and timely these days.

More than any other genre show in the last 25 years, The X-Files shaped pop culture. And while some of the special effects may be dated now, and some of the plots feel gimmicky or insensitive, it’s also that rare genre show that holds up remarkably well so many years later—one even contemporary audiences can sit down with and enjoy for the first time. Because beneath all of the rubber masks and weirdness, it was a show built on solid emotion and complex characters.

When asked what attracted him to the show as a member of the audience, (Vince Gilligan) says, “It was the relationship between Mulder and Scully… It’s a man and a woman and they’re both young and attractive and of course there’s the sexual romantic component that’s just simmering under the surface. That stuff always works—it always has, it always will, in storytelling. But there was an extra added component beyond that; beyond the boiler plate relationship, there was the fact that they were both really, really smart and they both respected each other’s intelligence. They didn’t always agree (in fact, they seldom agreed) but they never disrespected each other. You could tell, and in the very earliest episodes of course Scully comes in essentially as a spy for the higher ups of the FBI, so of course at the very beginning Mulder doesn’t trust her, and rightly so. But that gets dispensed with fairly quickly, I think even within the first hour. Then that wonderful dynamic goes into full force and these two really respect each other and they really enjoy each other’s company. They enjoy working with each other and they always have each other’s back. I think I just love that.

Plenty has been written about The X-Files over the years, and some cynics may say there’s nothing to be said now that hasn’t been said before. But with Monsters of the Week, co-authors Zack Handlen and Todd Vanderwerff prove that thinking critically about our beloved entertainment will never get boring.

There’s nothing wrong with absorbing your media and then walking away, enjoying it merely on its first blush and thinking little of it later. But for those of us like Handlen and Vanderwerff, half of the fun of watching TV lies in breaking down what does and doesn’t work in it. There’s plenty of joy to be had in tracing the threads of over-arcing plots, in pinpointing turning points for the characters, in examining why one episode was particularly scary or moving and why another’s monster fell completely flat.

Monsters of the Week is an ambitious volume. From the series’ pilot to the most recent event series, Handlen and Vanderwerff leave no stone unturned. Collected here are short essays that cover every episode—and movie—produced thus far in The X-Files universe, arranged in chronological order and interspersed with illustrations and interviews with the show’s creator, writers, producers, and directors.

Not only do we get critical analysis of every episode, but we also get glimpses behind the curtain and honest reactions from the men and women on the other side of the camera. Creator Chris Carter confesses his least favorite episode. Fan-favorite writer Darin Morgan talks his writing process (and how his first episode, “Humbug,” gave the series the opportunity to start including overt comedy).

There’s a lot of love permeating Monsters of the Week; obviously, Handlen and Vanderwerff are passionate fans. But they don’t pull any punches, either, spilling plenty of ink on the show’s duds and missteps.

Originally an AV Club series of online essays, Monsters still has a fun, light, and conversational tone throughout the collection—but it’s also a bit meatier and more poetic than standard internet forum fare. Handlen and Vanderwerff do a fantastic job of mixing scholarly observations with lovely turns of phrase, highlighting how a show that could be creepy and gross was also capable of gorgeous, sweeping philosophies and commentary:

So Mulder goes to Puerto Rico and he hears Voyager I’s golden disc played back, suggesting aliens scooped up this particular bit of space flotsam and traced it back to Earth. He sees a tall, spindly figure in the doorway. He finally, at long last, believes again—wholeheartedly. He has won the war within himself and found his way back to certainty. “Little Green Men” works beautifully as a whole host of things, from an introduction to the show for any curious passerby checking in for the first time to a reassertion of the status quo for any longtime fans who needed help remembering. But what it does best is remind viewers that this isn’t a show about aliens as much as it is about our need to believe in something lest the night become too dark and terrifying. There’s so much darkness in the night sky, but there are also so many stars. And maybe one of them is looking back at us.

Whether you’re a fan who’s been with the show almost from the beginning (guilty as charged), a new convert to the mania of Mulder and the skepticism of Scully, or you’re thinking of diving into The X-Files for the first time, Monsters of the Week is a fitting companion to your DVDs. Watch an episode, then read the corresponding entry—or skim through to your favorite stories and see how Handlen and Vanderwerff’s opinions match up with yours.

Personally, I’m popping in Season One right now. Monsters has gotten me all rosy with nostalgia, and I can’t wait to follow Mulder and Scully on their long, weird, winding adventure all over again.

Check out all of our X-Files coverage!