Review: A Matter of Chance by Julie Maloney 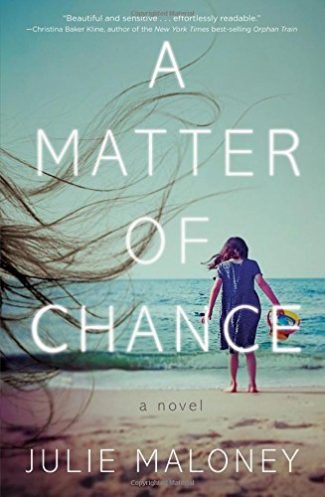 A Matter of Chance

A Matter of Chance by Julie Maloney follows a single mother’s neverending search for her missing daughter as each twist and turn brings her closer to finding the truth—but puts herself in increasing danger in the process.

Maddy Stewart is vacationing on the New Jersey shore with her 8-year-old daughter, Vinni (short for Lavinia). They’re walking along the beach, enjoying the weather and each other’s company, when a neighbor, the elderly Rudy, collapses on the sand of an apparent heart attack. Knowing time is of the essence, Maddy leaves Vinni with Rudy and his distraught wife, Hilda, so that she can call 911 from her rented beach house.

By the time Maddy makes the call and returns to the beach—20 minutes?—Vinni and Hilda have disappeared, leaving the suddenly deceased Rudy on the shoreline. Maddy figures that Hilda has taken Vinni to Hilda and Rudy’s house. But when she goes searching for her daughter, Vinni and Hilda are nowhere to be found. The minutes without Vinni stretch into hours, the hours into days, days into weeks, weeks into months and years.

A Matter of Chance, the debut novel by Julie Maloney, is the story of every parent’s worst nightmare told in painstakingly painful detail. Beginning with the instant before Maddy realizes something is wrong and following her through her desperate search for her missing daughter, Maloney takes the story moment by moment. This is the gut-wrenching tale that we all hope remains in the realm of fiction.

Probably one of the strongest choices Maloney makes is creating a situation in which it is hard to fault Maddy as a mother. When the initial emergency happens, Maddy doesn’t leave her child with strangers—they’ve had dinner with the elderly German couple, Rudy and Hilda. She knows where they live. She knows where they work. And of course, you have to help your neighbor when he’s having a heart attack. Plus, Maddy is never fully out of sight—her vacation home is right on the beach. She’s never more than a hop, skip, and a jump away from her daughter.

This is a situation any parent could find themselves in. So, immediately, the reader is along for Maddy’s story without a sense of “Well, if I were the parents, I would never have done such a thing.” (Said in a snotty voice.)

With that righteous sensibility eliminated, Maloney creates a situation in which the reader feels that stomach-dropping terror of “my child was right there, now they’re not.”

After making the 911 call at the house, I turned around too fast and tripped over a pile of books stacked on the floor by the couch near the front door. I stumbled and grabbed the air. My arm landed on the lampshade Vinni said reminded her of an old lady’s hat. I regained my balance and kept moving. As I slammed the door behind me, I heard a loud crash and knew the table lamp had fallen.

I hurried to the spot where I had left Vinni. She and Hilda were gone. The faded color of Rudy’s lips stopped me from touching him. I knelt down and put my ear to his chest.

I looked up and saw two men dressed in shore-police attire—white shirts, navy Bermuda shorts, and skinny navy ties—running in my direction. Two people from the rescue squad, one woman and one man, carried a stretcher behind them.

The tide stilled. The earth stopped its rotation.

“Where’s my daughter?” I said to the cop who reached me first. “Where did they go?”

After that emotionally wrenching initial moment, Maloney crafts a narrative filled with realistic emotion. The author takes the reader through the first moments where there’s still a tinge of hope to the next weeks where you’re waiting by the phone. Then, the months drift by, and no amount of Missing Children notices or Rewards for Safe Returns seem to bring any attention to the situation.

The grieving process that Maddy goes through is viscerally real. But Maloney dodges making the situation maudlin or overly sentimental by making Maddy an active participant in the search for her daughter. If she hears a rumor that her child has been spotted, then you can bet Maddy will show up. She doesn’t give up.

She hounds the Spring Haven Police Department’s lead detective, John D’Orfini—a man who wants to find Vinni almost as much as Maddy herself.

I jumped up. “I have to find my daughter. I can’t sit around here and do nothing. I know she’s out there. It’s just…” I stumbled for words. “Vinni’s different from other children. She senses things before they happen. There’s something I haven’t told you.”

John D’Orfini stayed silent. I sucked the inside of the bottom of my mouth with little bites. “That morning as we walked on the beach … she said she knew I loved her differently than her father did. ‘Daddy is different than you, Mommy’ she said, ‘If I lose you, I know you’ll never give up looking for me.’

“Your daughter’s a pretty special child, isn’t she?” The words fell out of John D’Orfini’s mouth, but he leaped over them and added, “We’ll find her.”

A Matter of Chance is a truly lovely novel. Julie Maloney is a credited poet, and her command of language serves her well in telling this heart-wrenching, sometimes rather stressful story of a mother’s international hunt for her child.