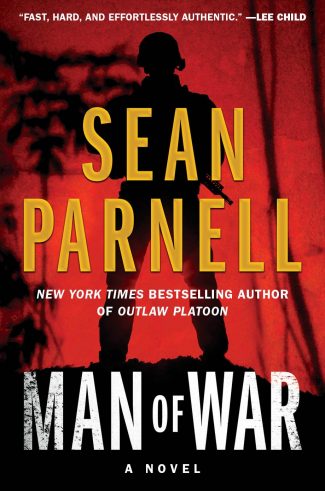 Man of War by Sean Parnell is a fiction debut and an electrifying military thriller—a gripping tale of action, suspense, and international intrigue that introduces a compelling new hero, Eric Steele.

Sean Parnell brings the reader into the trenches immediately with his military thriller, Man of War. The book dives into the action, transposing the lives of Eric Steele—trained government operative—and the White House officials pulling the strings. As the chapters go on, the connections between each character take shape, and it is revealed how they are all working towards—or against—the destruction of the United States.

Parnell’s writing style is both informative and captivating, giving readers a crash course in military terminology while also building curiosity and suspense, page after page. Chapters shift between character viewpoints—one chapter may be told from Steele’s perspective, while the next is from the Vice President or perhaps the Director of the CIA—which helps build suspense as the reader tries to find the connecting thread. Parnell also expertly ends each chapter on a cliffhanger, as in this example from Chapter 11, ending from Steele’s perspective:

“Secure the prisoner!” one of the shooters yelled, in a language Steele recognized but couldn’t place. He thought it might be Afrikaans. One of the fighters reacted to the order, turning to the open door and aiming his rifle at the hooded man trying to get out.

The rifle steadied and Steele heard himself scream.

Chapter 12 then switches perspectives to a completely different character, location, and situation. It is only once this chapter concludes that we are then brought back to Steele’s narrative. These cliffhangers push the narrative at breakneck speed, making it difficult to put down before turning the final page.

In addition to the captivating action, Parnell includes a myriad of military and political terms with enough details to inform but not bore. He describes the weaponry, the roles of each sector of the military, and the various aircrafts and vehicles in great detail so the reader doesn’t need a background in the genre to quickly grasp and visualize the given scenario. This is something that not all authors are able to accomplish, however, Parnell does so effortlessly.

Parnell also excels in character development, managing to weave personality, humor, and romance into each in order to humanize the characters and provide moments of light-heartedness amid a very serious and tense plotline. For example, this moment when Steele is plummeting to the ground from 30,000 feet in an Iron Man-esque armor suit:

He grabbed the toggles running from the control lines and took command of the chute. Well if I’m going down, I want to do it in style.

“Are you sure you want to purchase ‘War Pigs’ by –“

“Your purchase has been processed. Playing ‘War Pigs.’”

The heavy guitar riff blasted through the speakers, building over the bass guitar and the haunting whine of an air raid siren. On the ground tracer fire coiled and whipped from building to building, with explosions erupting in time with the music.

Moments like this combine with the playful banter between Steele and his handler, Demo, to make for a lead character that’s easy to love. However, Parnell also continuously portrays how dangerous Steele can be and the lengths he will go to in order to protect his country.

Overall, Man of War makes for a fast-paced read that will keep you on the edge of your seat until the last page. While this is one of the first military thrillers I’ve ever read, it is definitely not the last, and I look forward to continuing to read Sean Parnell’s writing and following the story of Eric Steele.