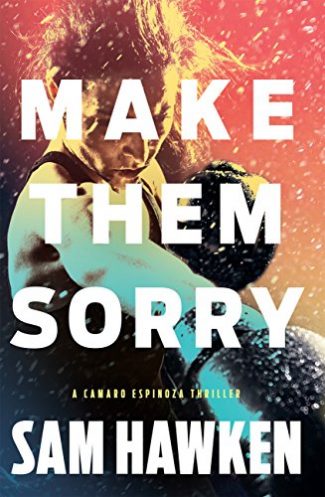 Make Them Sorry by Sam Hawken is the third book in the Camaro Espinoza series, where a violent stalker has a terrified woman in his sights, but the ex-army medic will make him sorry.

Sometimes a book’s title says it all, and that’s certainly the case with Make Them Sorry. This is Sam Hawken’s third book to feature former army medic Camaro Espinoza, and this reader hopes it won’t be the last. The setting is sizzling Miami, and Camaro is, well, as happy as Camaro gets, I suppose. She spends a lot of time keeping herself in fighting shape—and it definitely shows.

She makes her living as the charter captain of a beautiful, 59-foot boat called the Annabel, named after her sister. It’s not a complicated life, and that’s how Camaro likes it. Unfortunately, a woman named Faith Glazer is determined to make a dent in that fragile peace. She needs help with a stalker who’s been tracking her every move. “Obsessed” doesn’t quite cover it.

He liked the way she wasn’t tight or tanned or brilliantly blonde. Miami was full of such women. But she wasn’t dark with Caribbean promises either. She was different. Special. It wasn’t something he discussed with anyone, but he heard the occasional comment and he knew other men considered her plain, or at the very least not the model-quality lovely the unrealistic demanded. She had a too-broad mouth and an oddly quirky smile, and her hair never seemed to want to behave in the Florida humidity. He spent a very long time appreciating the modest swell of her breasts and her imperfect hips. A woman with a body like this was unthreatening, almost motherly. A woman without the sleek good looks of a commercial goddess would never turn her back on a good man.

What a charmer! He definitely just wants to take her out for drinks like a perfect gentleman. Luckily, he is just the kind of guy that Camaro loves to get her hands on, and after observing Camaro’s skills at the fighting gym, Faith is convinced that she can protect her. After a few tries, Faith finally gets Camaro to listen to her, and Camaro resolves not to let anything happen to Faith.

Luckily, she’s got the help of Detective Ignacio Montellano (“heavyset and fiftyish, but not old”), who has installed himself as somewhat of a guardian angel to Camaro, whether she likes it or not. In fact, he comes to her aid after she gets arrested for a DUI while driving home on her Harley after a hard-drinking night at the bar. Very hard. I lost track after ten shots of Jack.

“If you’re wondering what I want for helping you, the answer is nothing,” Ignacio said. “I’m not that kind of cop. And I won’t ask if we can be pals, because I don’t think you really want one. Won’t stop me from trying. I only wanted to tell you to keep on the straight and narrow from here on out. There comes a day I don’t catch trouble before it finds you…”

However, after an explosive and deadly confrontation, Camaro finds out that they may be dealing with more than just a stalker. She and Ignacio begin to dig into Faith’s work as a forensic accountant, which leads them directly to some extremely shady folks. Who knew accounting could lead to dark places like the lawless jungles of Columbia and the ruthless leader of a murderous paramilitary group?

Soon, Ignacio finds himself torn between the right thing (aka helping Camaro, who is determined to protect Faith) and a couple of FBI agents that are determined to take over the investigation. What follows is nothing less than a terrifying cat-and-mouse game that will test everyone involved.

If you like a heroine who can more than take care of herself (and just about everyone else) and literally takes no crap from anyone, then this is the book (and series) for you. The action is nonstop—this book virtually crackles with energy—and the body count is considerable, but it’s Camaro’s existential need to protect those who cannot protect themselves that is the real driving force. And she really is a force for good, even if she has to go to some dark places to achieve justice.

Camaro is a lean, mean, fighting machine and a woman of very few words. But that’s ok because she says plenty with her fists. It helps to have read the first two novels in this series, if only to get a better handle on what drives Camaro, but new readers shouldn’t be afraid to jump in here if they want.