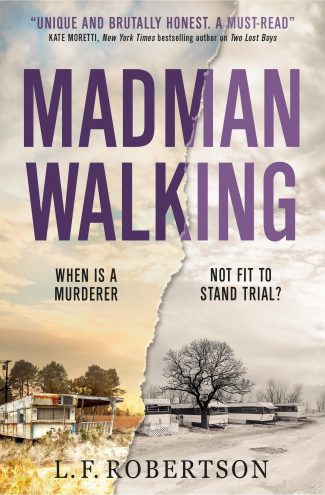 Madman Walking by L. F. Robertson is the second book in the Janet Moodie series.

Janet Moodie is a defense lawyer. She used to work in the state defender’s office and was part of a small community of attorneys who defended capital cases, along with her more acclaimed husband, Terry. But one February morning, Terry commits suicide, and Janet’s life is turned inside out. She quits the state defender’s job a year later and moves to a small town named Corbin’s Landing, opening a private practice out of her home office that takes on mainly court-appointed appeals. For a long time, she avoids taking on new death-penalty cases—until an old colleague named Mike Barry calls, asking if she remembers Howard Henley.

Howard had been a regular pest to the state defender’s office, calling from prison to protest his innocence—among other things—to each attorney in turn. He had been convicted of hiring a man named Steve Scanlon to murder a rival drug dealer named Jared Lindahl, who lived and operated out of the same trailer park as the other two men. A good defense attorney would have shredded the prosecution’s flimsy arguments, but Howard—a man with a history of mental illness and self-injurious obstinacy—chose to represent himself and earned a death sentence for his troubles.

The state Supreme Court’s appointments attorney has persuaded Mike to take on Howard’s latest appeal, and he’s turned to Janet for help. What follows is a fascinating and deeply realistic look at the processes of the American justice system, as Janet and Mike uncover evidence that could prove, once and for all, Howard’s innocence.

L. F. Robertson is a practicing defense attorney specializing in death-penalty appeals, and her experience shows in her clear, even-handed descriptions:

A more enlightened Supreme Court held decades ago that prosecutors, as government officials, have a duty that goes beyond winning the cases they bring; they have to try to make sure that the result of the prosecution is just and fair to all sides […] This ideal has one big weakness: that it’s the police and the prosecutor—the players who are trying to get the defendant convicted—who decide initially whether a piece of information should be disclosed. Police officers and prosecutors don’t usually know much about how to defend a criminal case; and it’s easy for even a conscientious detective or district attorney to take an unduly narrow view of what evidence might benefit the defense. And some prosecutors and police officers see exculpatory evidence as an obstacle, adding confusion to a case whose outcome, in their minds, should be clear[.]

Ms. Robertson brings to life the slowly turning wheels of justice, detailing the long processes of investigation and evidentiary hearings that are usually skipped in popular entertainment. I got a real feel for the heartbreaking plight of many death-row inmates, who are too often poor, mentally ill, and at the mercy of a system that oftentimes cares more about procedure than truth.

Janet is a terrific heroine for these circumstances. Sensible and calm, her placid exterior hides a soul that feels deeply. Don’t let that fool you into thinking she’s a bleeding heart, though. She and Howard are frequently at odds, mostly due to Howard’s less-than-firm grip on reality, as evidenced by his frequent phone calls to her:

It had been fifteen minutes cycling through a shorter version of the same rant as the prison visit, with a few more twists: we weren’t helping him; he didn’t kill anyone; he was in jail when it happened; this was all a conspiracy by the prosecutor, the judge, and the mayor of Wheaton to have him executed; Mike and I weren’t taking his case seriously; he suspected we were in on the conspiracy; he would report us to the State Bar and sue us for malpractice; I had to come see him and bring an investigator and an FBI agent, or else. And on, and on, until the fifteen minutes the prison allowed for his call were up, and the line went dead in mid-sentence.

Howard made me wonder how many people were on death row because they were just pains in the ass.

The characters in this novel are all vividly drawn—features, flaws, and all. I especially enjoyed getting to know Janet and her far-flung family, as well as her close-knit group of neighbors; her domestic experiences added to the Veritas of the novel as an in-depth look into everything that goes on while a death-row appeal is being argued. Often meditative and always compassionate, Madman Walking is an examination of our legal system through the lens of a single, representative case, and it should be a must-read for anyone curious as to the lives and work involved with legal defense in modern-day America.