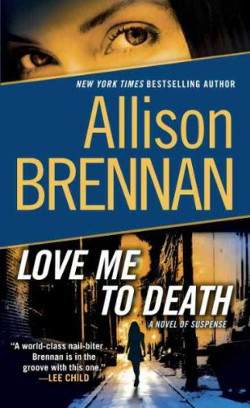 Love Me to Death by Allison Brennan is the first novel in the Lucy Kincaid series, which begins six years after Lucy's attack as she struggles with PTSD and pursues a role fighting sexual predators for the FBI.

Allison Brennan, a New York Times bestselling author of many romantic suspense novels, first introduced the world to her character Lucy Kincaid in the third novel of her No Evil Trilogy, Fear No Evil. Though she was just a side character there, Brennan knew that Lucy’s unique story deserved its own telling, and three years later, readers were reunited with Lucy in the first novel of the Lucy Kincaid series, Love Me To Death. Though the events from Fear No Evil irrevocably shape the person Lucy was to become, there’s no need to read that novel before diving into Love Me To Death.

For a police procedural, this particular novel begins Lucy’s journey in an interesting place. Lucy isn’t yet law enforcement, though she’s surrounded by relatives who are either involved in private investigation or the FBI.

In Lucy’s timeline, it’s been six years since she was kidnapped and brutally raped while being filmed for an illegal pornography website. She survived her attack and even killed the man responsible, but that’s really brought her no peace. She’s left with some severe PTSD and is constantly worried about another attack. But she fights past this and manages to overcome her fear and paranoia by joining a women’s rights group to work on catching online predators using a system she developed while studying criminal psychology at Georgetown. Better yet, she’s applied to work in the same area for the FBI so she can ensure that what happened to her won’t happen to other women.

Would she ever be able to escape her past? Six long years and it had followed her to D.C., to her new life.

Followed? No, that wasn’t right. Her past was as much a part of her identity as her future. She couldn’t escape it, because what had happened six years ago had molded and shaped every decision she’d made since, the big and the small, whether she realized it or not.

I loved that the story actually starts before she joins the FBI. It’s interesting to see her life leading up to law enforcement as she uses whatever resources she can to figure out what’s going on with the case she’s pursuing—which happens to be the murder of the accomplice to her prior attack. While it’s initially difficult to believe that any law enforcement agency would hire someone with Lucy’s level of PTSD, Brennan does address the issue, lending some authenticity to the idea that Lucy is being considered for the job regardless. It certainly helps that’s Lucy’s sister-in-law is in the FBI and that her mentor at the women’s rights organization has serious influence there as well.

The plot of this novel is extremely engaging, and I found myself empathizing with Lucy and her situation a lot. There were some convoluted info dumps at the beginning that had me flipping back and forth between sections trying to remember who everyone was and what their relationships were to each other, but once the story gets going, it was easy to become immersed in the fast-paced thrills as Lucy attempts to help solve the murder of one of her attackers.

As her investigation deepens and she begins to uncover more and more evidence, she also discovers that someone is following her. She enlists the help of Sean Rogan—a partner in her brother’s private investigation firm—not only to help keep her safe but also to help solve both mysteries in a story that is action-packed, well-paced, and keeps the suspense going as the book drives to its astonishing conclusion.

But Sean means more to her than just a friend. And when the stalker makes himself known, it threatens the careful balance Lucy has created for herself that allows her to find happiness amidst the chaos of her PTSD and the investigation.

She hated feeling like a victim again and vowed she wouldn’t. She wasn’t a victim. She’d fought back six years ago, and while she lost a couple of rounds, she’d won the battle. She’d survived. She’d prospered. She had a life and a future and family.

Someone watched you yesterday at the ice rink. Some sicko saw you with Sean. Saw you kiss him. Dirtied what was pure and fun.

Her stomach heaved and she closed her eyes, prayed that Sean couldn’t see her inner turmoil. But when her eyes were closed, memories of what Roger Morton had done to her flooded her mind: flashes like a camera, other watching as she was raped and beaten.

She couldn’t bear the thought that her affection toward Sean had been tainted by a voyeur. A stalker. Pain seared her, physical angst, until she could hardly breathe.

This is a really great start to a series that has seen twelve novels and two novellas at this point. It’s perfect for binge reading, and I can’t wait to see how Lucy teams up with Max Revere in Shattered!

Listen to an excerpt from Love Me to Death!