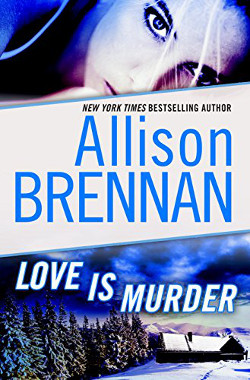 Love Is Murder by Allison Brennan is a prequel novella to the Lucy Kincaid series, where a murder at the snowed-in ski lodge she's vacationing at causes the aspiring FBI agent to have to figure out which of the lovebirds trapped in the lodge is capable of killing.

One of my favorite things about writing for Criminal Element is how often it introduces me to terrific authors whom I’ve never had time to read before snagging one of their books on assignment. Allison Brennan is definitely one of these authors, and I greatly regret that it's taken me this long to discover her for myself.

Love Is Murder is a novella set a year before the first novel in Ms. Brennan’s Lucy Kincaid series, Love Me to Death. Lucy is the survivor of a brutal abduction that took place the day of her high school graduation. She was subjected to horrific tortures but refused to be broken by the trauma. With the support of her family—many of whom work or have backgrounds in law enforcement—she’s pulled her life back together and is intent on applying to the FBI so that she can prevent what happened to her from happening to others. Towards this end, she’s earned her degree in criminal psychology, interned at both the Senate and the medical examiner’s office, and volunteered with a victims’ rights group.

As this novella begins, however, she’s taking some needed time off with her beloved brother, Patrick, on a skiing vacation at the secluded Delarosa Resort. An unexpected blizzard is closing off the resort, marooning its eight guests and three employees, when one of those guests—the beautiful newlywed Vanessa Russell-Marsh—is found dead in her room. It looks like suicide, but Lucy doesn't believe in taking any unattended death at face value. Between her own training and Patrick’s job in security services, they secure the area and quickly conclude that Vanessa was murdered.

But who could have killed her, and why?

The husband is usually the culprit in cases like these, but Lucy is reluctant to suspect the clearly grieving widower or, indeed, the other honeymooning couple staying at the resort. Observing this latter pair, Kyle and Angie, makes Lucy reflect on her own romantic life—or current lack thereof:

Lucy watched them leave the kitchen. She reflected that even after two years with [her ex] Cody, she’d never felt that comfortable with him, where she could joke about their sex life or show public displays of affection. With Kyle and Angie, it was entirely natural, not in any way forced. Their affection showed in their expression, how they looked at each other, how they touched each other. It was the subtle hints that showed Lucy that Kyle and Angie truly cared for each other, the little things that Lucy had worked hard to remember when she and Cody were still together, but usually forgot.

She wondered if she would ever find someone where she didn’t forget those small touches that said I love you.

But who else could possibly have motive? Lucy is happy to ride out the blizzard and let the authorities take over once the road clears … till the murderer decides to take Patrick out of the picture as well by drugging his water bottle. Perhaps the drugs were only meant to incapacitate rather than kill, but the effect on the Kincaids is dramatic:

[Lucy] was angry beyond measure—Patrick had been in a coma for nearly two years. Any drugs that depressed his central nervous system could potentially put him back into that coma. The doctors didn’t know why he’d reacted in the first place—he’d been conscious prior to his brain surgery after an explosion had injured him, causing swelling in his brain. The surgery saved his life. One doctor believed that the coma was a direct result of the brain surgery—that after fixing the damage, he’d simply gone to sleep for two years. Another doctor believed that Patrick had an adverse reaction to the anesthesia, based on his medical history. When he was nine, his appendix had burst and he’d under gone emergency surgery. He’d been in a coma for two weeks then.

Whatever it was, any sedatives were incredibly dangerous for Patrick.

Now that the murderer has made it personal, Lucy will stop at nothing to bring him or her to justice.

So much happens that it’s almost hard to believe that this book is merely novella-length. Aside from the well-constructed mystery, we learn so much about the Kincaids. If you’ve read Love Me to Death, as I have, you’ll really enjoy learning more about their personal and family history.

And for those new to Lucy and her family, Love Is Murder is an excellent sample of the delights on offer in Ms. Brennan’s full-length novels. Suspenseful thrillers lightened with romance and given emotional heft by the tight-knit Kincaid clan, these page-turners are bestsellers for very good reason!