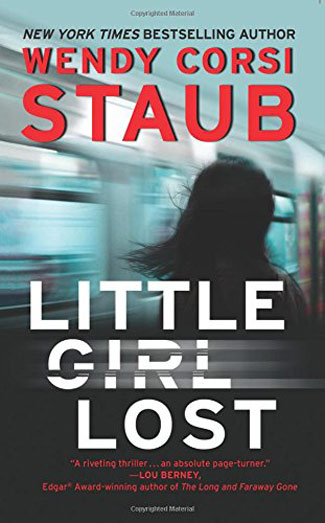 Little Girl Lost by Wendy Corsi Staub is a gripping novel of psychological suspense where a young foundling’s path to her biological parents leads to a killer with a chilling agenda.

The story opens in the pre-dawn hours of May 12, 1968—Mother’s Day. Calvin Crenshaw has just reported to his janitorial job—just one of five occupations that he and his wife, Bettina, hold between them—at Harlem’s Park Baptist Church when his work is interrupted by a whimpering sound coming from the choir stall. He is surprised to find a baby there, wrapped in a small bundle. Having been unable to conceive a child with Bettina, he makes the fateful decision to claim her as their own. Elsewhere in New York City, an elusive serial killer known as the Brooklyn Butcher has been slaughtering families in their beds, leaving one young female survivor at each scene. These seemingly disparate events are anything but.

Flash-forward to March 7, 1987. College student Amelia Crenshaw makes the shocking discovery that she is a “foundling”—somebody that was abandoned by his or her birth parents to be discovered and cared for by another—as her mother lays dying of cancer in a hospital bed. Both aggrieved and grieving, she vows to unlock the secrets of a past she never suspected she had—despite her de facto father’s refusal to discuss the details of her supposed adoption.

Meanwhile, NYPD Detective Stockton Barnes is reeling too; not only is his mentor and surrogate father wasting away before his eyes, but he receives legal notice that a one-night stand is now pregnant with his child. Fortunately (or not), he has a case to distract him: the disappearance of millionaire Perry Archibald Wayland III, whose apparent suicide may have been staged. Whatever the truth, he’s determined to find it. Little does Amelia or Det. Barnes know that their search for answers will intersect with a killing spree that harkens back to the Brooklyn Butcher.

Staub’s characterizations are exceptional throughout (both for main characters and minor ones), with Amelia and Barnes—who readers might remember from The Black Widow (2015) as well as the author’s Mundy’s Landing trilogy—serving as counterpoints, given that she is the product of an unwanted pregnancy and he the cause of one. Though their paths cross only once, it’s the emotional weight of their individual conflictions that truly resonates.

Further, Staub paints an impressively vivid backdrop, bringing 1980s New York City to life through her depiction of landmarks and locales as well as pop culture and politics. It’s a subtle thing but one that hints at the depth of her research—and that elevates the story accordingly. There are the requisite twists and turns, too (including a killer reveal), and a few particularly hair-raising scenes that are sure to deliver chills on an otherwise hot summer night.

Little Girl Lost is a masterful suspense story that satisfies as a standalone while also hinting at what’s to come as the series progresses to the present day. The trademark thriller elements are all in play, but Staub also breaks new ground, showing the deft hands and sprightly mind that have rendered her a distinct and dexterous talent throughout the decades.