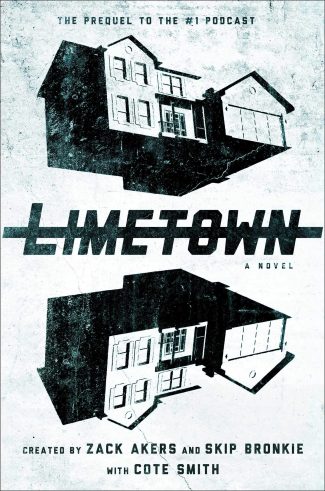 Limetown by Cote Smith is the explosive prequel to the #1 podcast of the same name, about a teenager who learns of a mysterious research facility where over 300 people have disappeared—including her uncle—with clues that become the key to discovering the secrets of this strange town.

I am really bad at listening for detail over extended periods of time. Whether it’s a podcast or an audiobook, I get easily distracted and find myself constantly trying to rewind to see what I missed. Loved ones have given me plenty of suggestions for supposedly gripping options, but nothing’s really clicked. And then I got my hands on a copy of Cote Smith’s Limetown.

A prequel to the hit podcast created by Zack Akers and Skip Bronkie, Limetown follows two different narratives separated by roughly two decades. The first is of the young woman who will eventually become an investigative reporter looking into the bizarre story of the title location, while the other is of her brilliant but troubled Uncle Emile.

Lia Haddock is in her senior year of high school at the beginning of the novel, and she’s just beginning to notice her mother’s suddenly erratic behavior, forgetting important dates and disappearing for days at a time with no explanation. But then, the Panic at Limetown, as it’s known, becomes national news—the population of an entire private community in Tennessee disappears after frantic 911 calls, leaving only the smoldering remains of a single corpse. Back in Kansas, Lia doesn’t think much of the incident until her mother reveals that Emile is somehow involved.

Twenty-five years earlier, Emile had been a student at the same high school Lia attends. His closest friend is his older brother, Jacob, in large part because Emile just doesn’t fit in. Maybe it’s his strange upbringing or his uncanny ability to say what other people are thinking, but no one else really likes him. He can look out for himself, but when life throws the brothers more questions than they have answers for, they find themselves on the run, in search of a mother they’d once fled and an explanation for the inexplicable things Emile can do.

A large part of the story of Limetown is the struggle over how to deal with Emile’s capabilities. Everyone seems to have an opinion or, worse, an ulterior motive, but Emile finds that he learns best from seemingly mundane situations, as here, where one of his guardians shows him how she fixes a beloved but constantly malfunctioning cuckoo clock:

One time, and only one time, she waved Emile closer as she worked and showed him what was inside. She named each part she tinkered with: the pipes and weights, the pendulum and chains. All were part of an impossible machine, [she] said. Such a grand design. The key was to not let it overwhelm you. Don’t look at all the moving parts at the same time. Start with one. Figure out its function, and then, when you’re ready, move on to the next. But never forget the parts that came before, the role they play, and how they all come together to make the bird sing.

In the present, Lia is trying to come to grips not only with what might have happened to her uncle but also with her own burgeoning sense of self. It’s a fascinating look into the developing personality of the girl who will become the podcast’s heroine, as she tries to reconcile her desire for the truth with her sense of detachment from other people.

The fall semester of junior year, she had to take a strengths assessment, this boring exam that asked a hundred questions designed to determine with kind of person you really were, so you could plan your looming career accordingly. At the end, it gave your top five strengths, and the bottom three. Your weaknesses. Lia’s number one strength was intellection, which meant she was an introspective person who liked to be mentally challenged, and who liked to be alone.

At the bottom was sympathy. This came as a shock. She’d always thought of herself as a nice person, someone who could sense how others were feeling, when they were happy or sad. And maybe that was true. But her number-two strength was empathy, which meant, yes, she was very perceptive about the emotions of others, but that didn’t mean she cared. She simply understood and, in her case, moved on.

After reading this novel, I found myself driven to try the podcast, and oh wow. It helped a lot that there are only six longer episodes of about 30 minutes each in the first season, interspersed with much shorter announcement-type snippets, but still, the experience felt much less like being told a story and much more like being entertained by a wildly immersive, wonderfully acted radio drama. I nearly jumped out of my seat at the end of the fifth episode! The first episode of the new season has just come online, and the podcast is now being developed as a live-action show (by Jessica Biel, whom I will always admire for having the guts to adapt Petra Hammesfahr’s The Sinner for American television).

This Limetown prequel novel fills in a lot regarding the personalities and backgrounds of Lia and Emile Haddock, and it’s a must-have for any fan of the series. Personally, I found it a compelling gateway to my very first favorite podcast, and I consider it part of a series I’m excited to see keep developing.