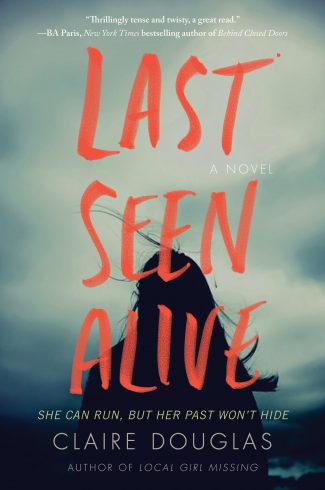 Last Seen Alive by Claire Douglas is a riveting novel of psychological suspense about one woman who is trapped in the death-grip of the past—and every one of its dark secrets.

Claire Douglas’s Last Seen Alive is a unique thriller that stands above most other contemporary novels in that genre. While it plays within the constraints imposed by the genre, it also focuses on elements that make it a bit different. A couple of female narrators, a creepy first act that could easily be marketed as a horror novel, and antagonistic characters who cannot claim superior moral ground over each other are just three of the main elements that make this a must-read novel for fans of thrillers and for readers who like to see sharp explorations of the darkest corners of human behavior.

Libby Hall has taken a few hits recently and is in desperate need of a vacation, even if her financial situation won’t permit it. Luckily, she sees a note for a house swap, and the place sounds exactly like what she and her husband, Jamie, need after suffering through a miscarriage and surviving an incident at school where Libby had to save a child from a fire. The house they will swap with belongs to the Heywoods, a rich couple that urgently needs a place in Bath while their daughter is in the hospital. The swap turns out to be in favor of the Halls, as the place they get is isolated, huge, has panoramic views, and is full of the excesses their dull two-bedroom apartment lacks.

However, there is something off about the place. Mr. Heywood seems to be into taxidermy and surveillance equipment, there is a strange man that keeps crossing through the property, and the Heywoods are a tad evasive whenever Libby calls them on the phone. Despite those things—and Libby’s creeping discomfort—the couple tries to relax and reconnect. But their plans are thwarted when Jamie falls ill and ends up having to stay at the local hospital. Left alone, Libby’s paranoia runs wild—and it soon seems more than just paranoia. There is a man they keep seeing, a man who almost caused an accident as the couple was sightseeing. Could any of it have to do with Libby’s past? What follows is a tense, eerie, emotionally gritty narrative about how the past has a way of catching up to the present and how lies that refuse to stay buried can shatter anything that’s built on top of them.

As mentioned above, there are three main elements that make this novel stand out. The first is that Douglas nails atmosphere. The reader knows Libby has been through a lot, but things keep happening, and her mood affects everything, filters every occurrence. The end result is an oppressive, overwrought atmosphere that permeates the entire narrative and frames the events very well. In fact, the atmosphere is so omnipresent that the story sometimes brushes up against the supernatural:

I stand in the doorway, assessing the room, wondering about the couple who have slept in our bed. I feel violated somehow, knowing they have stayed here, feeling as though our lovely flat, our sanctuary, has been tainted by something unseen, almost as though an unsavoury spirit has provided the place, changing the energy.

Another crucial element of Last Seen Alive is the dual female narrators. This point can’t be discussed without giving too much away, but the main point is this: Libby did some awful things in her past, and that past did not end the way she thought it did. When you carry on with your life convinced of something that isn’t real, the consequences can be disastrous, and Libby finds that out the hard way.

The way she learns is what makes up the best, most creepy and visceral portions of the novel. There is evil at work, but when that evil is punishing other evil deeds of the past, then the equation balances out. This balance makes Last Seen Alive a bizarre book in the sense that no moral superiority can be pointed to, thus eliminating the sense that there is a victim here. As Libby’s past is revealed, the character becomes multilayered: victim, criminal, innocent escapee, murderer. Once this multiplicity is revealed, the character morphs and the reader is forced to constantly reassess their feelings toward her—even when she’s in distress, which she is throughout the entire narrative:

I hardly sleep. Evelyn’s words spin around and around in my head, refusing to be dislodged, like a wayward sock in a washing machine. Every time a shadow passes across our roman blind, or the sound of a bin clatters in the street, I wake up with a start, my heart pounding, my nightwear clinging to my sweaty skin.

Last Seen Alive is a psychological thriller that explores budding friendship, the nature of love when it’s built on lies, and the way things like vengeance or the desire to escape a bad situation can drive people to do despicable things. The beauty of this novel lies in Douglas’s talent for quick buildups and escalating reveals. The reader starts knowing almost everything and eventually realizes nothing is right, nothing is true, and all hints lead to deeper, darker, more complicated lies. Readers who enjoy clever plot twists and complicated characters who morph into different beings after each revelation would be remiss to skip this taut, gripping novel.