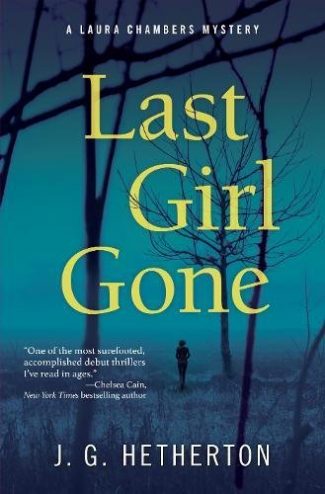 Last Girl Gone by J. G. Hetherton is a pulse-pounding series debut and the next obsession for fans of Julia Keller, David Bell, and readers of unflinching thrillers.

J. G. Hetherton was raised in rural Wisconsin, graduated from Northwestern University, and spent nearly a decade in Chicago before moving to North Carolina in pursuit of a girl; they now make their home there with twin daughters. Hetherton dabbled in many different day jobs before answering the call of the unwritten novel, and he often spends his leisure time hiking or in the company of a good book. Last Girl Gone is his debut.

Investigative journalist Laura Chambers’s star was on the rise at the Boston Globe before a source burned her, resulting in a very public firing—and worse, necessitating her return home to Hillsborough, North Carolina. There, she writes puff pieces for the Hillsborough Gazette and pretends to ignore the town’s critical eye. She also lives with her overbearing mother, who believes her husband’s death was an act of abandonment and never wastes an opportunity to incite an argument with her daughter. It’s a welcome-if-woeful distraction, then, when a local girl who’d gone missing turns up dead, the victim of a homicide, and Laura sees the opportunity to redeem herself by recapturing the glory of front-page news.

But her editor, Bass Herman, isn’t quite sure that she’s the one for the job. Despite recognizing Laura’s talent and ambition—not to mention his own luck in being able to afford a reporter of her caliber—he feels that Colin Smythe might be better suited for the assignment. After all, Smythe has an abundance of local contacts and the ability to get people to speak on the record who might shirk Laura. It’s a valid point, but it’s one that Laura—who has observed Smythe to be an egocentric, sexist hack—refuses to concede. Instead, she convinces Herman to allow her one day to dig up some dirt before he reassigns the story.

Problem is, there’s little to go on. Consequently, Laura has to squeeze her boyfriend, local sheriff’s deputy Frank Stuart, for information—and she isn’t averse to sneaking a look at his notebook when he fails to give up the goods (assuming there are any). After staking out the crime scene with her photographer—17-year-old Leon Botton, who usually snaps pics of school sports—she recognizes an outsider in their midst. Some savvy sleuthing soon turns up his identity: FBI Agent Timinski. Timinski eventually agrees to be an unnamed source in law enforcement or a source close to the investigation; he can’t comment on an ongoing case, but he does point her attention to the year 1988.

Hesitantly, Laura does her due diligence—and discovers that this isn’t the first time young girls have been abducted and killed in her hometown. This revelation leads her to retired sheriff Donald Rodgers, who was never able to close the case despite countless hours painstakingly tracking down leads and obsessively reviewing files. Having tried to finally put this painful past behind him, he nonetheless allows Laura access to the boxes that still clutter his home—and eventually, to the memories that have haunted him for decades. Though she’s missed her deadline, Laura realizes that she’s uncovered a much bigger story than she could ever have imagined. More than that, she’s about to become a part of it.

Already beyond the bounds of dispassionate reporter, Laura is further drawn into the case when she receives a cryptic phone call from the perpetrator. This is but the beginning of a Zodiac-like communication pattern meant to taunt and tantalize; indeed, the UNSUB starts sending riddles (and far worse) that contain clues to his/her whereabouts. But with the promise of discovery comes the peril of death. And while some play a dangerous game for the glory of winning, others frustratingly fail to act at all. It’s a series of events that ratchets up the tension (and the repercussions) while motivating Laura to put far more on the line than her (admittedly sullied) reputation.

Laura’s homecoming is made all the more harrowing by virtue of her tenuous liaisons, and its these associations that further propel the narrative: her mother, who plays the perpetual victim; her boyfriend, who suspects their relationship is a ruse; Timinski, who may be using her as a mouthpiece for his own agenda; Smythe, who could be a catalyst for the #MeToo movement. Additionally, she has a therapist, Dr. Jasmine DeVane, to help her work through these entanglements—though even this dynamic becomes muddled when Laura invites her to consult on the investigation. She is further conflicted by the competing desires to get the scoop (and therefore the byline) and to see justice done for those who have died—and those who are still among missing. It’s these complexities, and the underlying motives, that give Laura her depth and drive.

Simply stated, J. G. Hetherton has written a damn fine thriller. Beyond character, cultural resonance, and a propulsive premise, he unleashes twists and turns with the finesse of a pro and profers an ending that’s equal parts surprising and superlative. If Last Girl Gone is any indication, there are exceedingly great things to come.