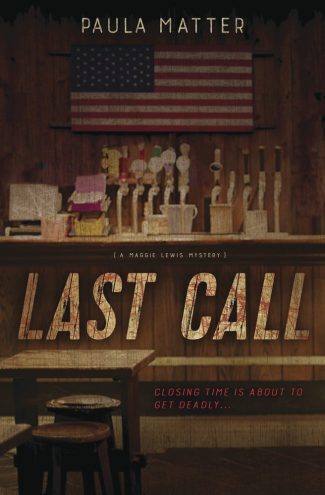 Last Call by Paula Matter is a debut novel and the first book in the new Maggie Lewis Mystery series.

I’ll admit it: I’ve been eagerly awaiting Paula Matter’s debut since the weekend we shared space at a writers retreat in 2008. I don’t recall having gotten to read her Work in Progress—we were separated into small groups and only saw a handful of writing samples—but I do remember thinking that her personality alone made her worth knowing. Flash-forward a decade (and some short stories included in anthologies published domestically and in Germany), and Matter has finally delivered Last Call, the first book in her mystery series featuring protagonist Maggie Lewis.

As the story opens, readers find temperamental, middle-aged Maggie tending bar at a Florida VFW. A recent widow, she’s still mourning the death of her husband, Rob, who was killed while working in their fixer-upper of a duplex—a murder that remains unsolved. Struggling to make ends meet, Maggie has moved upstairs, demolished the mudroom where Rob was killed, and rented the lower level to former cop and PI-in-the-making Michael Bradley and his young daughter, Chris. It’s all a bit tedious but tolerable, given the comfort that can come with commonplace. And then, Maggie unwittingly finds herself at the epicenter of another murder—but this time as a person of interest.

The victim is Jack Hoffman, a Korean War veteran discovered dead in his truck in the parking lot of the VFW. A frequent patron, Jack was known for diligently chronicling the misdeeds of the bar’s customers and staff in a collection of notebooks. Along with his body—punctured by stab wounds—is a scrunchie belonging to Maggie. Consequently, North DeSoto Police Chief Bobby Lee, who Maggie still resents for not having closed her husband’s case, has no choice but to bring her in for questioning. They both know the evidence is flimsy, but procedure must be followed. The small-town gossip is both immediate and inevitable, and Maggie is soon suspended from her job pending a vote by the high-ups. Unable to afford to sit around and wait, she decides to clear her own name—and potentially solve a murder in the process.

Equal parts emotional and emboldened, Maggie finds a willing accomplice in Michael, who teaches her the tricks of his trade. And while her first efforts are bumbling at best, a series of increasingly unfortunate events indicates that somebody, or somebodies, unknown sees her as a threat and may be willing to kill again to put an end to her amateur sleuthing. There’s a gradual transition in her demeanor from passive to passive-aggressive to assertive, and Maggie, whose personal and professional conflicts render her real and relatable, begins to feel herself coming alive in ways that she hadn’t expected. As heady a realization as this is, it’s sobered by the knowledge that the killer(s) must be a member of her insular group of friends and acquaintances.

There’s lots to like here, not the least of which is Maggie herself—a feisty, flawed, fun, and occasionally foul-mouthed femme fidèle. (Sure, Maggie can get a bit repetitive in her ruminations and exclamations—I mean, sheesh!—but it’s forgivable.) Further, Matter surrounds her with a cast of complex, and perhaps conspiratorial, characters who command attention, even when they only occupy a scene or two. Clues are dropped like breadcrumbs throughout, and the mystery itself sustains interest, becoming more emotionally resonant as we learn about the victim’s tragic past and how it may, or may not, have influenced the present.

Last Call is an accomplished debut that—ahem—more than meets the bar and perhaps even raises it. The plot satisfies as a standalone but also serves up open-ended questions and tantalizing tidbits that hint at things to come. Overall, it’s a potent brew that hits the spot, like an ice cold beer on a hot summer night. Raise a glass to Paula Matter—and to Maggie. They’re two women worth getting to know. Cheers!