Review: Killers of the Flower Moon: The Osage Murders and the Birth of the FBI by David Grann 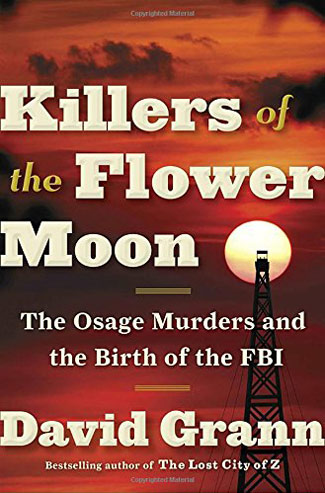 Killers of the Flower Moon

Killers of the Flower Moon: The Osage Murders and the Birth of the FBI by David Grann is a twisting, haunting, true-life murder mystery about one of the most monstrous crimes in American history.

Oklahoma, 1920s. The Osage Nation is the richest group of people in the United States. An oil boom on their land has afforded them an income large enough to pay for servants, automobiles, new homes, and whatever goods they need. However, the oil money quickly drew all kinds of trouble to this small corner of Oklahoma. Corrupt politicians, crooked lawyers, and fraudulent insurers descended into this last holdout of the Wild West as surely as moonshiners, thieves, and murderers.

And there are murders. A series of deaths plagues the Osage tribe. At the epicenter of these murders is the family of Mollie Burkheart, an Osage woman whose only crime has been going about her life. First, her sister is found shot, execution style, in a creek. Then, her mother dies a slow, lingering death—possibly poisoned. As if all these tragedies weren’t enough, her other sister and brother-in-law die in a house explosion.

Killers of the Flower Moon: The Osage Murders and the Birth of the FBI is a detailed, visceral true story by David Grann, author of the equally fascinating The Lost City of Z. When the murders—gruesome and involving multiple levels of local and federal government officials—remain unsolved for years, they come to the attention of J. Edgar Hoover, the new boss of the Bureau of Investigation who will live on to be legendary in his investigative methods.

Hoover appoints Tom White, the law-and-order man from Texas—a man raised in a prison by his widowed sheriff father. Using all of his experience, a handful of undercover operatives, and his wits, White unveils a large, dangerous conspiracy.

In Killers, Grann has brought to life turn-of-the-century Oklahoma. By the time you’re done reading the first few chapters, you understand the environment—both natural and political. His descriptions put the reader right into the thick of things. You don’t have to have a degree in history, forensics, or politics to understand the significance of what Grann explains.

Each corpse tells its own story. A fractured hyoid—a bone in the neck that supports the tongue—can indicate that a person has been strangled. Marks on the neck can further reveal whether the killer used his bare hands or a cord. Even a victim’s torn fingernail can speak of a fateful struggle. An influential nineteenth-century manual on medical jurisprudence cited the saying, “A medical man, when he sees a dead body, should notice everything.

The Shoun brothers set up a plank as a makeshift table. From a medical bag, they removed a few primitive instruments, including a saw. The heat slithered into the shade. Flies swarmed. The doctors examined the clothes Anna wore—her bloomers, her skirt—searching for unusual tears or stains. Finding nothing, they tried to determine the time of death. This is more difficult than generally presumed, particularly after a person has been dead for several days. In the nineteenth century, scientists believed that they had solved the riddle by studying the phases a body passes through after death: the stiffening of the limbs (rigor mortis), the corpses changing temperature (algor mortis), and the discoloring of the skin from stagnant blood (livor mortis). But pathologists soon realized that too many variables – from the humidity of the air to the type of clothing on the corpse – affect the rate of decomposition to allow a precise calculation. Still, a rough estimate of the time of death can be made, and the Shouns determined that Anna had been deceased between five and seven days.

Grann is not only good at explaining the details of the individual cases that create the core of the investigation, but he’s also incredibly successful at explaining the people involved. Whether it’s a convicted murderer, a rich-yet-struggling Osage, J. Edgar Hoover himself, or a Texas Ranger, Grann gives all of the important players their time and space.

For example, by the time you’re finished reading the chapter on Tom White, a sheriff’s son, you feel like you know his family as well as what it would be like to be raised inside a prison at the end of the 19th century. White witnesses riots and hangings. He sees violence and death. And despite the injustices he observes, the lesson he takes away is that justice is still necessary.

The first hanging that Tom witnessed was carried out in January 1894. A nineteen-year-old black man, Ed Nichols, had been convicted of raping a girl and sentenced to be “hung by the neck until he is dead.” The duty of performing the execution, which hadn’t occurred in the count for a decade, fell to the sheriff.

Tom’s father hired a carpenter to construct the gallows near the southern wall of the prison, the only place where the ceiling was sufficiently high. The location was ten feet from Nichols’s cell, and the condemned man – who maintained his innocence and still hoped for a reprieve from the governor – could hear the planks being sawed and nailed, sawed and nailed, the pace quickening. Tom’s father was determined to make the killing mercifully swift, and once the apparatus was completed, he repeatedly tested it with bags of sand.

Perhaps because he witnessed this – and other executions – or perhaps because he had seen the effect of the ordeal on his father, or perhaps because he feared that the system could doom an innocent man, Tom grew to oppose what was then sometimes called “judicial homicide.” And he came to see the law as a struggle to subdue the violent passions not only in others but also in oneself.

Anyone interested in history, crime, forensics, the FBI, Oklahoma, or the Osage Indian Nation will find a new favorite book in Killers of the Flower Moon. Grann has done some meticulous research into this tragic section of American history, and the result is a beautiful, moving story. Men and women, long dead, breathe again in these pages.