Review: Why Kill the Innocent by C. S. Harris 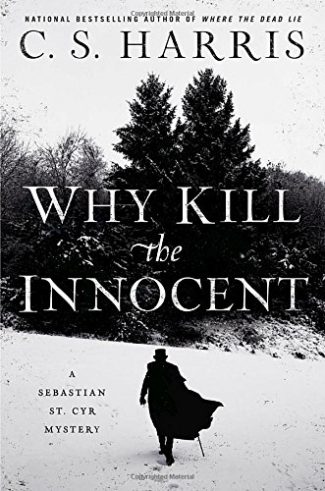 Why Kill the Innocent

It’s January of 1814, and a killing winter shows no signs of relenting. With snow blanketing the city, the Thames solid ice, and coal prices skyrocketing, the poor are freezing to death in the streets. So when Hero—the wife of Sebastian St. Cyr, Lord Devlin—stumbles across a body half-covered in snow, the logical assumption is that the woman hit her head in an icy fall. But there isn’t enough blood at the scene.

Complicating matters, Mrs. Ambrose was Princess Charlotte’s piano instructor. Thanks to her connection to the royal family, the government is quick to hush up the death as a mere accident. But Sebastian and Hero refuse to accept that. Whether Jane Ambrose was murdered or died of manslaughter, she deserves justice. The truth must come out—even if it harms the royal family.

He walked on, his shoulders hunched against the driven snow as he tried to put together the puzzle of Jane Ambrose’s death with three-quarters of its pieces still missing. In the last forty-eight hours his grasp of the woman she once was had begun to strength, the reality of her life and the way she’d lived it emerging like a shadowy form still half hidden by a storm. He saw a talented musician denied the brilliant career that could have been hers had she only been born male, and a devout, loving mother, faithfully honoring her religion by enduring an unhappy marriage only to then be devastated by the loss of both her children.

How could such a woman come to terms with that blow? he wondered. Impossible to do, surely, without questioning every assumption, every platitude by which she had always sought to live. Jane’s brother swore she’d taken her marriage vows too seriously to ever think of leaving her husband or taking a lover. But had that remained true? Would Christian Somerset know if it did not?

Jane’s husband had made a practice of hitting her. Hurting her. What would a man such as Edward Ambrose do if he discovered his wife’s infidelity—or suspected it? Hit her in the face? Rape her?

The deeper Sebastian and Hero dig, the more tragic Jane Ambrose becomes. She was a beautiful, incredibly talented woman who lost nearly all of her family to consumption. She was unhappily married to a man who abused her while keeping a mistress on money earned with her music.

More than that, she was exceedingly unlucky when it came to courtly intrigue. Punished for refusing to spy on the Princess she loved, threatened by the power behind the throne, desperate to help a young girl out of a dreadful situation…

There’s no lack of motive or suspects in this case, and the question remains: was her death premeditated or an accident?

Why did such an innocent woman die?

C. S. Harris continues to impress with this series. The established characters are still fresh and interesting after all these years, their relationships dynamic, and the mystery itself is knotty and emotional.

The historical research and commentary are as impeccable as ever, with plenty of real figures—like the royal family and William Godwin, father to the far more famous Mary Shelley—popping in to add factual flavor to the fictional proceedings. Sebastian’s London is a gritty, harsh, real place, full of suffering yet still rich and beautiful.

Of course, there are numerous dangers and deaths for Sebastian to traverse, assassination attempts, and threats of duels. The hero remains as feisty and capable as ever, and the mysterious French midwife Alexi Sauvage has a sizable role.

As with most St. Cyr mysteries, Why Kill the Innocent has plenty to say about justice and inequality. Here, the focus is on society’s callous disregard and ill-treatment of women. Jane embodies so many of the issues with which women have constantly struggled; religion and law trap her in an awful marriage and give her no means of avenging herself when brutalized, while society forces her to hide away her musical talent.

He had never subscribed to the belief that women were by nature either less intelligent or less capable than men. Yet he now realized he’d never appreciated to what extent an Englishwoman’s sex determined essentially every aspect of her life—far more than her wealth or social status or perhaps even her skin color. Simply by virtue of having been born female, Jane had been raised by a father who tolerated rather than encouraged his girl child’s amazing talents. As a woman grown, she’d hidden her gifts as both a pianist and a composer in order to conform to the behavior considered proper for a modest gentlewoman of her station. And because of England’s civil and religious laws, she’d been forced to bear her husband’s unfaithfulness and physical abuse without complaint or possibility of redress.

In the subplots, a royal princess risks being utterly destroyed by rumor, yet if a man had done the same, he would have been encouraged or ignored. A desperate young mother who stole food to support her infant—left to fend for herself when her husband was impressed into the current war—is sentenced to hang for her offense.

Even the Prince Regent’s wife, Caroline, is vulnerable to imprisonment, divorce, or execution, purely due to her gender. And while the winter cold kills scores of people, the Prince continues to lavishly spend his people’s money on his own pleasures. Everywhere Sebastian and Hero turn, there are more and more examples of how barbarous England’s treatment of its women and poor truly is.

This is certainly a bittersweet tale. But it’s an extremely satisfying and enjoyable one. With 13 mysteries under her belt, Harris—and Sebastian—shows no sign of slowing down. Thank goodness.