April 20, 2017
Incendiary: The Psychiatrist, the Mad Bomber, and the Invention of Criminal Profiling by Michael Cannell follows a serial bomber who stalked the streets of 1950s New York and details the race to catch him that would give birth to a new science called criminal profiling. 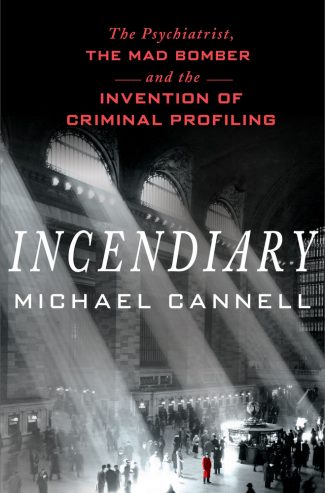 Incendiary: The Psychiatrist, the Mad Bomber, and the Invention of Criminal Profiling

The concept of criminal profiling is not new to those of us who read crime fiction or watch TV shows such as Law & Order and Criminal Minds, but I’m willing to bet that the landmark case that ushered forth criminal profiling as a new method of crime-solving is relatively unknown. Even more startling, given the ubiquity of the method, is how new it is. It wasn’t until 1956 that a psychiatrist provided the first “reverse psychology” profile using a combination of intuition and Freudian concepts that helped police pinpoint the suspect of a string of bombings after all other clues failed them.

In 1956, Elvis Presley was topping the charts, Eisenhower was President of the United States, Mickey Mantle was playing baseball for the New York Yankees, Nelson Mandela was arrested in South Africa, and my own mother had her first birthday. In the grand scheme of things, criminal profiling hasn’t been around that long. And it’s hard to imagine where we’d be today without it.

By 1956, the NYPD had spent 16 years fruitlessly attempting to identify and capture the “Mad Bomber”—a mysterious figure who had planted 32 bombs since 1940. None of these bombs proved lethal to the public, only to the police intent on diffusing them, and not all of them even detonated. But it created an atmosphere of terror in New York City unlike any experienced before.

He [the Mad Bomber] embodied everything unnerving about the years W.H. Auden called “the age of anxiety.” Whatever cruelty they inflicted, the century’s two great wars were at least fathomable. The bomber was not. He was like a dream distortion of post-war disquiet—unhinged, unrelenting, perpetually hidden in city shadows.

Interestingly, this same case would also see advancements in New York City’s one and only bomb squad as well as the use of forensic science to add physical evidence to witness testimony. Technology was advancing, and with it were the types of crime happening in New York City. The NYPD had to evolve in the way it solved those crimes as well now that canvassing the streets and knocking heads wasn’t doing the job anymore. It was the dawn of a new era.

Michael Cannell does a remarkable job covering the historical and cultural contexts that influenced the crimes perpetrated by the Mad Bomber, the first remarkably accurate attempts of criminal profiling, and advancements in forensic science. It’s a thrilling ride through a diverse cast of characters—detectives, journalists, and most especially Dr. James Brussel—who played a crucial role in revolutionizing crime solving. And because Cannell is using a vast amount of primary sources and news articles, we really get the sense of who these people were, how they lived their lives, and how their interactions ultimately broke the case of the Mad Bomber after 16 years of dead ends.

But the solving of the case is not the only thing on this book’s agenda. Cannell also follows the legal proceedings occurring in two different boroughs, Brooklyn and Manhattan, and their two very different outcomes. Allegedly, the man ultimately charged with the crimes perpetrated by the Mad Bomber really was mad—according to psychiatrists, the suspect suffered from a dangerous strain of paranoid schizophrenia. But the modern definition of the insanity defense was also new and still subject to testing in court.

The judges in each borough assigned to the Mad Bomber case had differing views on how to define “insanity” in the legal sense, and the legal maneuverings by each court and by the legal teams are fascinating. The law has always been defined by how courts interpret it via rulings in cases, and this is no exception. It’s something we take for granted now as we watch countless crime dramas portray criminals pleading insanity to “get out of” punishment for their crimes. So it’s interesting to take a look back at the foundations of this particular legal remedy as well as how the mentally ill were treated then versus how they’re treated now.

Reporters seated in the press gallery noticed the lawyers stiffen in surprise. The proceeding had taken a strange turn. Judge Mullen’s queries, delivered so stridently from the bench, expressed his disdain for the psychiatrists who were, under Durham [the current definition], supposed to play the crucial role in evaluating Metesky’s state of mind. Even more surprising, Judge Mullen’s line of questioning focused on Metesky’s ability to distinguish right from wrong, suggesting that he would revert to the McNaughton definition of insanity. Was it possible that Judge Mullen would use Metesky to turn back the judicial clock?

Cannell presents the facts surrounding the Mad Bomber case in such a compelling way that I found myself staying up late at night completely engrossed. Nothing is left out, and I feel that he has given us the most complete picture we could have of everything that went into capturing the Mad Bomber and how those events played out to influence modern detection and crime solving. Most importantly, with all of elements involved, such as legal definitions, science, medical history, psychiatry, psychology, journalism, police history, and cultural context, I never felt lost.

Incendiary is perfect for crime fiction enthusiasts, crime journalists, and crime fiction writers who are looking for detailed insights in and foundations of criminology as we know it today.

Check out an interactive map of the Mad Bomber’s path of terror through NYC!