Review: In The Night Wood by Dale Bailey 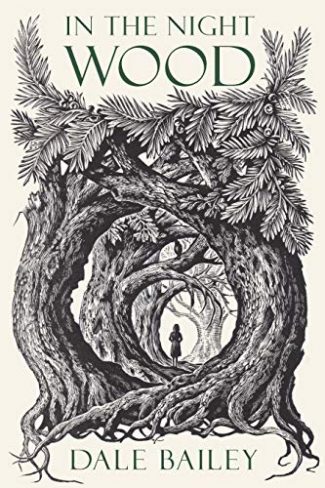 In the Night Wood

In The Night Wood by Dale Bailey tells the tale of a grieving biographer who finds himself slipping inexorably into the supernatural world that consumed his subject.

Charles Hayden left America to escape, or at least forget. After the devastating death of his five-year-old daughter, he hopes that settling into a new project in England will help heal the wounds inflicted on his marriage both by Lissa’s death and by his own earlier infidelity. His wife, Erin, has inherited the remote estate of a long-dead Victorian author best known for writing a haunting children’s book titled “In The Night Wood.” Charles persuades her that moving will give them a fresh start, oblivious to Erin’s fear that a fresh start will mean forgetting Lissa altogether.

But Yorkshire bears constant reminders of their dead daughter, from half-glimpsed apparitions to the disappearance of a little girl who looks uncannily like Lissa. The Haydens each have their ways of coping: Charles immerses himself in research for a biography of Erin’s forebear, Caedmus Hollow, while Erin herself sinks into a morass of depression, alcohol, and drugs, imprisoning herself in Hollow House while the forbidding Eorl Wood presses in all around.

Charles is hardly freer, for as he digs deeper into the mysterious life of Caedmus, he begins to find disturbing parallels to his own. And then he meets Silva North, a beautiful archivist who reminds him of the woman he had an affair with back in North Carolina. Worse still, Silva’s daughter, Lorna, bears more than a passing resemblance to Lissa. Charles begins to doubt his sanity, even as he wonders if he’s somehow trapped in a story that has echoed through the centuries, originating from the dark forest where evil is stirring anew.

I desperately love modern takes on traditional fairy tales, and Dale Bailey’s In The Night Wood is the best recent adaptation I’ve had the pleasure of reading. Based on the English legend of the Green Man, it’s a smart, scary novel about stories and choices, deeply rooted in history. Mr. Bailey’s love of stories is exhilarating, as here where he uses the familiar tale of “Hansel And Gretel” to make a point:

Once upon a time.

So tales begin, each alike in some desperate season. Yet how many other crises – starting points for altogether different tales – wait to unfold themselves in the rich loam of every story, like seeds germinating among the roots of a full-grown tree? How come [Hansel and Gretel’s] father to be so faithless? What made his wife so cruel? What brought that witch to those woods and imparted to her appetites so unsavory?

So many links in the chain of circumstance. So many stories inside stories, waiting to be told.

Once upon a time.

In The Night Wood is a glorious puzzle box of a horror novel, featuring also two things that I, perhaps idiosyncratically, very much appreciated: a satisfying number of excerpts from Caedmus’ masterwork (I really, really dislike novels that hinge on fictional fairy tales but never include more than allusions to such) and a cipher that wasn’t eye-rollingly obvious. And it’s all written so beautifully, with literary allusions that made the bibliophile in me (quietly) squeal in delight. Here Charles considers other famous Yorkshire authors as he and Erin drive for the first time to their new home, in their solicitor’s wake:

It was a bleak prospect even on this clear April morning, and Charles found himself thinking of the Brontë children, tubercular and strange, more than halfway mired in fantasies wrested by sheer force of desperation from this unrelenting landscape, the remote Haworth parsonage and the churchyard before it, overcrowded with the dead. The present seemed to lie lightly on the land here, as though the narrow span of gray pavement, where the solicitor’s car hove momentarily into view at the crest of each new ridge, might simply melt away like a dusting of fresh snow, unveiling the bones of an older, sterner world.

Ultimately, In The Night Wood is a moving tale of the grip history has on us all, and of what it takes to move past tragedy without relinquishing love and memory. Full of mysteries and terror, it is the perfect literary horror novel.