Review: In the Darkest Hour by Anna Carlisle 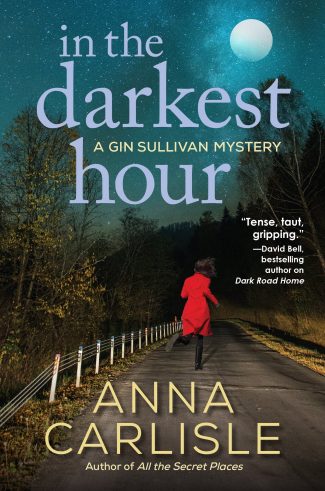 In the Darkest Hour

In the Darkest Hour by Anna Carlisle is the third book in the Gin Sullivan Mystery series, where a deadly web of drugs, depravity, and murder threaten to consume all Gin loves.

Anna Carlisle’s latest Gin Sullivan mystery is recommended for lovers of small-town mysteries who enjoy Chevy Stevens, Lisa Jackson, and Julia Maynard. But there are elements in In the Darkest Hour that are reminiscent of Janet Evanovich’s Stephanie Plum series as well—like Stephanie, Gin doesn’t live in a big city, she’s surrounded by childhood friends and relatives, and her personal life is in flux.

Former Chicago medical examiner Gin is living with her former high school sweetheart Jake Crosby. Their life isn’t exactly idyllic, since Jake and Gin have lingering issues from their past. When Jake’s mother is found dead of a heroin overdose, her death sends him reeling—even though he has been estranged from her pretty much since he was born. Gin realizes that money for his mother’s funeral will be an issue for Jake. Like so many, his finances are precarious.

There was also the matter of the expense. A simple burial could cost thousands of dollars. Jake’s finances, never completely secure in all of the years that she’d known him, had suffered a setback last year when a job he’d sunk all of his savings into was struck by tragedy: a fire wiped out the nearly completed house, and the investigation into a body discovered on the property tied up the project longer than Jake could comfortably manage.

Bodies and near bankruptcy—that would push anyone’s stress levels into the red zone. Jake is unable to stand back and let the cops find his mother’s dealer, even though in recent years small towns have become increasingly adept at handling overdoses. Gin says as much to Tuck Baxter, Turnbull’s chief of police: “I hear from my colleagues in Cook County that they’re experiencing a similar surge.” Inappropriately, Jake goes vigilante, collaring Jonah Krischer, a high school student, to make him “face justice.”

But Trumbull police chief Tuck Baxter has to contend with the boy’s father, a prominent physician who threatens legal action over the unconventional arrest—even though Jonah admits to stealing his dad’s prescription pad to sell phony opiate prescriptions for cash.

For Jonah’s get-out-of-jail-free card, he proffers information about a body he “happened” to discover when running through the woods around town. Even if Gin wanted to devote herself to hand-holding Jake, her professional expertise is needed. She was once a “full-time forensic pathologist,” and dead bodies are her business. Her friend Rosa asks her, “Why not open a nice little family practice and deal with living, breathing patients?”

Gin took her time choosing her words, trying to craft the response that Rosa’s question deserved. “I actually feel … honored to perform my duty to the dead,” she said. “In my profession, you come to view death as being as natural as birth. You lose your fear of it, while at the same time recognizing that a person’s friends and family are experiencing a terrible loss. It’s true that I often feel inadequate in the face of grief, but I know that I can make a real difference if I can give them the answers they need to understand what happened.”

There’s a famous fictional detective who says something very similar: J. D. Robb’s Eve Dallas. How many times while investigating a murder has Eve declared that “it is her vocation to stand for the dead, to see that they get justice?” Gin Sullivan has that same dedication. Life in Trumbull is no panacea, but even though Gin’s personal life is on the rocks, she is determined to do her part to uncover the identity of the dead man in the woods and help find his killer. It’s not for the pay because, as Police Chief Baxter points out, she gets “paid whether the killer’s found or not.” Earlier in her career, Gin was part of a forensic team identifying bodies after the Srebrenica massacre in eastern Europe. The families “were desperate for answers.”

“For closure. For a chance to bury their dead with all the love and respect they deserved.”

That’s what Gin Sullivan’s doing in Turnbull, Pennsylvania: standing up for the dead and solving murders. In the meantime, she’s letting go of her need to control everything to just celebrate life, even though there are often more questions than answers in Turnbull, let alone a plethora of dead bodies and mysteries.