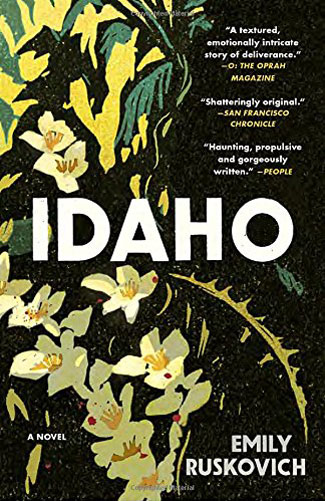 Idaho by Emily Ruskovich is a stunning debut novel about love and forgiveness, about the violence of memory and the equal violence of its loss.

You’ll want to make sure you have some time when you start this lovely, devastating book because once you start, you won’t want to put it down until you’re finished. Wade Mitchell is a married father of two young girls when he approaches the 12-years-younger Ann for piano lessons. Ann loves her job teaching choir at a small, rural charter school in Idaho, and although she’s not quite aware of it, she later realizes that she loved Wade from nearly the first moment she saw him. She also doesn’t realize until later that she spotted his oldest daughter, June, only nine at the time, standing in front of the locker of a boy she had a crush on. It would be the one and only time that Ann saw June. After she sees the faces of his family on television—the faces of his wife Jenny, then June, then May—she’s sure she’ll never see him again. But she does. He approaches her asking to start up his lessons again, not speaking of the murder of his youngest daughter, May, the disappearance of June, and the arrest of his wife Jenny for May’s murder. One night, she makes an impulsive offer that will forever change her life, already knowing that he was having problems with his memory, knowing that their relationship will be different.

“I could take care of you,” she said softly. She was very surprised to hear herself say this, but even so her voice was calm, as if she had been intending to say it all along. But really it was the only time that such a thing had occurred to her, and the words escaped her so quietly that she wondered at first if he had even heard. As she waited to find out, dozens of blackbirds, startled at nothing, rose off the telephone wire at once. Ann and Wade watched them converge and scatter like a handful of black sand thrown against the sky.

After a long time he said, “It wouldn’t be right.”

“I know,” she said, almost as quietly as before. “I would want to, though, if we could.” She did not know where her own calmness came from. “I could come live with you,” she said, “where you live. I don’t mind anything. It doesn’t matter.”

And their relationship is different. But she loves him so fiercely, it’s almost physical, and she’s devastated to learn that he forgets that his girls are gone—that May and June are still alive and it’s Jenny that’s dead. But Jenny is very much alive, serving a life sentence for her crime, and Ann is desperate for a connection to this woman and her children for reasons she can’t quite understand.

Living on a remote mountainside with a man with early-onset dementia comes with more than a few challenges, but Ann bears most of these with an unusual amount of grace—even when on the infrequent (for now) occasions that Wade is violent. This manifests itself in punishing Ann, much like he’d punish one of the dogs he trains. Ann bears this as well, only once running in fear when he pushes her face into a pile of knife blades. I can’t imagine having to deal with this from someone you know to be kind and loving, not being able to reconcile this behavior with the one you love. Hoping that remembering his children will help to bring him back from the brink, Ann attempts to find out the truth of that horrible day, and the book follows Ann as she finds pieces of Jenny’s and the girls’ lives around their home and attempts to piece together their pasts. She even visits an artist who had some success with age progression in hopes they can get a picture of what June may look like now if she was still alive.

Emily Ruskovich weaves in past glimpses of the family before the murder, painting a picture of Wade’s early life with Jenny, the challenges that come with living in such a remote, unforgiving environment, and the dynamic between the two sisters, which was both loving and fraught. We also get a picture of Wade’s childhood and Jenny’s time in the prison where she’s serving a life sentence, a life of regret and quiet pain. Ruskovich is a natural storyteller and effortlessly lends weight to seemingly inconsequential things, such as when Ann finds a book in the barn.

There was a book on the ground, fallen so that the spine was up and the pages were bent and splayed against the floor. She felt it at her fingertips, softened from mildew and grainy with dust, a large paperback.

Ann saw the erased lines of the face. She saw how carefully the instructions had been followed. The face was turned a little to the side. The nose looked confidently drawn—rectangle and circle erased—but one eye remained unshaded, blank, caught in the lines of the previous step like an eye seen through the scope of a gun, the pupil at the crosshairs. But the hair that fell on either side of the face was bold and detailed.

Ann’s attempt to piece together those awful events in order to understand her husband is heartbreaking, as is his memory loss and increasingly strange behavior, such as cutting holes in the walls as cat doors for a stray cat. Ann weathers all of this with so much elegance and grace, showing Wade a love that transcends the past yet can’t quite let it go.

She thinks of Wade.

He has lost his daughters, but he has also lost the memory of losing them. But he has not lost the loss. Pain is as present in his body as his signature is in his hand. He can sign his name perfectly, but he can’t print it. W, he tries. But the a is impossible without the cursive tilt, the remembered motion of the letter before. He knows his name but can’t see, can’t feel, the separate parts, which are only possible from the inertia of his hand. He knows his grief, too, but its source is also lost without its movement. It is a static thing, unrecognizable, disconnected.

Ruskovich’s story spans the better part of almost 50 years, and she makes each character feel intimate—like a friend who you just saw yesterday—in a way that seems effortless. It’s an astonishing achievement, especially in a first novel. It runs the emotional gamut, exploring themes of love and forgiveness, darkness and redemption, and just about everything in between. Do we learn what really happened the day of May’s murder, and why? I’m not going to tell you everything. You’ll want to experience this one yourself. Keep plenty of tissues handy—you’re going to need them.

Emily Ruskovich is a singular talent, and I’ll be first in line for whatever she has in store next. Stunning and transformative.