Review: I Know You Know by Gilly Macmillan 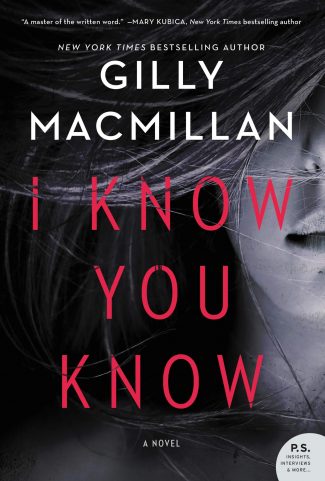 I Know You Know

I Know You Know by Gilly Macmillan is an original, chilling and twisty mystery about two shocking murder cases 20 years apart and the threads that bind them.

I Know You Know begins like any murder mystery: a dead body is found in a construction pit. We quickly realize, however, that this will not be your typical story. The recently uncovered body was buried in the same spot where Charlie Paige and Scott Ashby, two 11-year-old boys, were brutally assaulted and left for dead 20 years ago.

The case of Charlie and Scott was solved, the perpetrator sentenced, and the file stored away. Now, John Fletcher—the detective on the original case as well as the present-day investigation—must once again face the horrors of that case: the memory of finding Scott dead and watching Charlie take his last breath all those years ago.

The story is told through multiple first-person points of view. Our narrators—the detective, a grieving best friend, and a troubled, regretful mother, Jessica (or Jessy or Jess depending on who is talking)—each give slightly different accounts of that night 20 years ago and all that follows. Gilly Macmillan does a great job piecing the story together this way; so much so that I can honestly say that I did not see the full picture until the very last page.

While Detective Fletcher works on the new case, Cody Swift, best friend of Charlie and Scott, returns home. Cody is disturbed by the recent suicide of the accused, Sidney Noyce, and the fact that he was narrowly victim number three. Despite vowing that he would never return to Bristol, Cody is determined to reinvestigate the case as a tribute to his lost friends.

After the violence of my best friends’ murders, my house never felt the same again. Not the estate, not our community, not the families we knew, not the flat, not anything. The violence of the crime ripped everything apart. It was home, but not home.

Cody vows to uncover new evidence, but as you learn more about the community, you start to question whether the truth would fix this shattered town or stir up emotions buried by time.

Life shuffled in past any event, however traumatic, and you need to try to hold on to its coattails and keep moving with it.

In his search for answers, Cody launches a podcast. Each chapter (episode) of his podcast, It’s Time to Tell, tackles another question or person of interest. These were some of the most compelling parts of the book for me. During his podcasts, he would narrate personal recollections as well as interview others close to the case. As a podcast listener myself, I was thrilled to read the story in this format. I could almost hear the chimes at the beginning and static during the quoted phone conversations. “What follows is a recording of our conversation.”

Despite setbacks with production and violent threats, Cody keeps publishing because—once you start to question the guilt of the accused, you begin to wonder, who is guilty? As we well know, if Sidney is innocent, then someone else must be guilty.

When a kid gets murdered, it’s never about one life. It’s about everybody. It hits people at their core. It makes every aspect of life feel unsafe. Until I catch who did this, it’s going to feel as if the bogeyman has moved in with every family on that estate, and probably in the rest of the city, too.

While Cody’s podcast is growing, Jessica, Charlie’s mother, lives in fear that secrets from her past will be aired. We begin to wonder about the unaccounted-for 72 minutes of her life around the time the boys went missing as well as the mysterious man she calls to help end the podcast.

Each chapter, I began to question more and more the guilt of Sidney and the innocence of others. With the murder once again on everyone’s mind, some people are asking “What’s the harm in trying [to find the truth]?” or “Do I really want to know?” Which side are you on?

Haven Bassett is an early education teacher and mystery fiction lover who lives in Tampa, FL, with her husband and their rambunctious chihuahua.