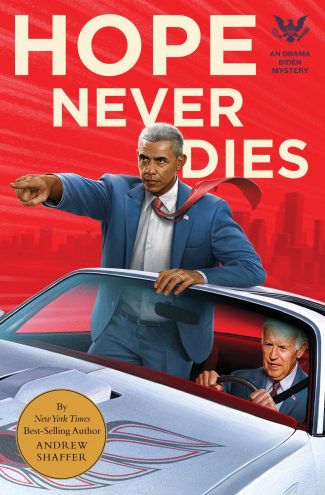 Part noir thriller and part bromance, Hope Never Dies by Andrew Shaffer is a high-stakes thriller that teams up Vice President Joe Biden and President Barack Obama in a mystery worthy of Watson and Holmes—a cathartic read for anyone distressed by the current state of affairs.

I admit that when I saw this book was coming out, I was psyched. Hope has been in short supply lately with all the terrible things happening in the world, so the title alone is a bit of a pick me up. And the idea of Barack Obama and Joe Biden teaming up to solve a mystery is irresistible, at least for me.

Biden narrates, and the opening finds Joe in an irascible mood, obsessively watching videos of Barack having the time of his life and seething that his best friend hasn’t even called him once in the six months or so since they left office. The nerve! Then, he notices something odd as he looks out of the window into the darkness beyond his office window and decides to check it out.

I called to my wife: “I’m letting Champ out,” but she didn’t answer back. I could hear the TV playing in our bedroom. Law and Order. I should have been watching with her. Instead I opened the back door.

As soon as I did, Champ raced across the lawn and tore off into the woods. The motion light over the back porch should have kicked on, but the bulb was burnt out.

It was an old one, I guess.

Old bulbs were meant to burn out.

The moon was full enough to light up the backyard. Our 7,000-square-foot lake house sat on four acres of property. Late at night, it was possible to imagine you were all alone in the world.

And now I smelled tobacco, a familiar brand.

Don’t get your hopes up, I told myself. “Hope” is just a four-letter word.

Is it who you think it is? Is it who Joe hopes it is? Of course it is!!

I swiveled around. There. To my left, by the big oak. Ten paces away. A man crouched low, scratching Champ behind the ears. German shepherds don’t take to strangers, but this man was no stranger.

He rose to his feet, a slim figure in his black hand-tailored suit. His white dress shirt was unbuttoned at the neck. He took a long drag off his cigarette and exhaled smoke with leisure.

Barack Obama was never in a hurry.

Joe is glad to see him, but unfortunately, Barack isn’t strictly on a social call. Amtrak conductor Finn Donnelly was hit by a train just that morning. His death shocks Joe. After all, Joe saw him almost every day when he would commute to and from the Senate. He considered him a friend. The condition of the body was such that they’re still not sure what happened and are running blood samples hoping to learn more.

If the news of Finn’s death isn’t enough, Barack shares that the police found a print-out of an online map with Joe’s house marked right in the middle of it. The whole situation boggles the mind, and the next day, Joe sets out to start asking around, hoping to find out what happened to Finn. He meets up with a detective who calls him claiming to have info about Finn. He says they found heroin in one of his pockets. Joe can’t believe it, not at all. Joe soon finds out that Finn’s wife is in an assisted-care facility, and when he visits, a strange man is hanging around, seemingly looking for something. Something is definitely very wrong, and Joe vows to find out.

If anyone can get to the bottom of things, Joe can—especially armed with his strong sense of justice and sympathy for people who are struggling to get by but doing their best, pushed down by a bureaucracy that seems determined to keep them down. Luckily, he also has the help of Barack Obama and his trusty Secret Service detail: a long-suffering guy named Steve (who has very little body fat).

Andrew Schaffer’s narrative is fantastic—equal parts buddy film and screwball comedy but never ridiculous. Their efforts to investigate Finn’s death while staying out of the crosshairs of their wives is hilarious. One of my favorite scenes is when Joe and Barack attempt to gain access to a hotel room where they suspect someone that’s up to no good may be hiding out:

Neither of us had a weapon. That was a minor problem. If somebody—the woman—had just broken into the room, this meant she was a criminal. And criminals carry guns. I wished I’d packed my pistol…but then again, maybe it was a good thing I hadn’t. If we really, truly ran into trouble, would I have been able to pull it out of my chino shorts without shooting off my family jewels? Barack would have a real field day if that ever happened.

I started to twist the door knob, but Barack held a hand out to stop me. He placed one of his oversized ears on the door. Political cartoonists had loved to mock Barack’s elephant ears. If only they could see him now, using them for their God-intended purpose.

It’s very easy to imagine Joe—in his wry voice, with a slight, well-meaning smirk—really telling this story, and it feels like Shaffer has his voice down pat. I could quote this book all day long. It’s a genuinely funny, empathetic story with a good mystery at its core, to boot. It made me pine for what we used to have (even more than I already do), and it’s a natural and delightful extension of all the awesome memes of Barack and Joe buddying around—and of the very real rapport and friendship the two have. Good times, indeed.