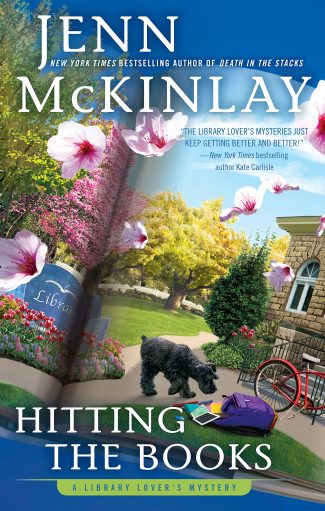 Hitting the Books by Jenn McKinlay is the ninth book in the Library Lover’s Mystery series.

Jenn McKinlay takes us back to Briar Creek in her latest offering in the Library Lover’s Mystery series. Lindsey Norris has moved in with Captain Mike “Sully” Sullivan. Things are going well-ish for the couple, with maybe a few hiccups.

A hit-and-run in front of the library distracts Lindsey from any domestic problems for a while.

She started to turn back to the room when she caught a movement out of the corner of her eye. A car was speeding down Main Street, going way to fast for the pedestrian-friendly area. Lindsey glanced back at the part and saw Theresa step into the crosswalk, where pedestrians clearly had the right-of-way. Lindsey’s heart thudded in her chest. She had the sick feeling that the car wasn’t going to stop.

She glanced to the right, thinking surely the driver would see Theresa and slow down, but he didn’t. Instead of hitting the brakes, the driver sped up. Horror flooded Lindsey as she realized Theresa was going to get hit. She cried out and slapped her hands against the glass window as if she could push Theresa to safety just by willing it. She couldn’t.

The victim survives with a broken leg and some bumps and bruises. Was it an accident? Or was the car aiming for her?

This is such a fun series to follow. Shakespeare said, “…true love never did run smooth.” That has certainly been the case for Lindsey and Sully. Between misunderstandings, stubbornness, Lindsey’s ex, and a charming actor, the two have had a rocky road to togetherness. Will they let whistling in the shower and not using the shoe basket ruin it?

A lot of relationships are changing in and around the library. Lindsey’s best friend, Beth, is a newlywed. She regales anyone who will stand still for a moment about her honeymoon. Robby, the charming actor, is dating Police Chief Emma Plewicki. He’s still a charmer, but he uses most of it on his girlfriend. Ms. Cole, aka “The Lemon,” has joined the Crafternoon group and isn’t quite as sour as she used to be. Sully is now an uncle.

Some relationships can take major changes in stride. Others can’t handle a change in the weather.

Communication seems to be the key. That has been the major hurdle for Sully and Lindsey thus far. The ex-boyfriend wasn’t the cause of a previous breakup. It was the fact that Sully didn’t talk to her before deciding she needed more space. The same thing happened when Robby appeared on the scene and started some heavy flirting with Lindsey.

Theresa Huston, tennis instructor and victim of the accident, is engaged to Larry Milstein. He owns a string of furniture stores and is a single father. Theresa will become Liza Milstein’s stepmother after having given her tennis lessons.

“You’re right. His personality is larger than life,” Lindsey said. She had never met Larry Milstein, but she knew the mayor of Briar Creek cleared his calendar whenever Larry called. “Milstein’s is the biggest furniture retailer on the East Coast. It seems to me other people in the same business might not be as fond of him as we are. He might have made some enemies along the way.”

She felt everyone turn to stare at her, even baby Josie, who puckered her mouth and made a smacking noise. She could feel the concern, the worry, the anxiety pouring off her friends in waves.

“I’m just theorizing,” she said. “You know, acknowledging the possibility that if someone had a beef with him, they might have tried to hurt him by going after his fiancée.”

“But you’re not planning to start investigating something that was probably just a hideous traffic accident, right?” Nancy asked.

“Right, absolutely,” Lindsey agreed. They were still staring. “So, what did you all think of A Tree Grows in Brooklyn? Did you like the protagonist, Francie Nolan?”

She took a big bite of her herbed ricotta bread and glanced around the room while she chewed. They all continued to stare.

“What?” Lindsey asked. “Do I have something in my teeth?”

Paula shook her head. “You are the worst liar ever. You know you’re not going to let the incident rest until you know for sure it actually was an accident.”

If you’ve read any of the previous books, you know Lindsey won’t leave it alone, especially when a stack of CD’s belonging to the library are found in the vehicle involved. I certainly wouldn’t want her to. Her insights, and occasional wrong turns, are what make these books so much fun.

I’m not ashamed to admit that some moments in this story really scared me. Moments when Lindsey, Theresa, and others are in real danger. More mishaps make it clear Theresa wasn’t the victim of an accident. But who would want the well-liked tennis coach dead?

Twists and turns are all part of the mystery genre. But the road the author paves for us to get to the truth is more of a rollercoaster than a highway. Just when I thought I had it all figured out, the story would zig and leave me breathless.

I suggest you strap in and enjoy the amazing ride.