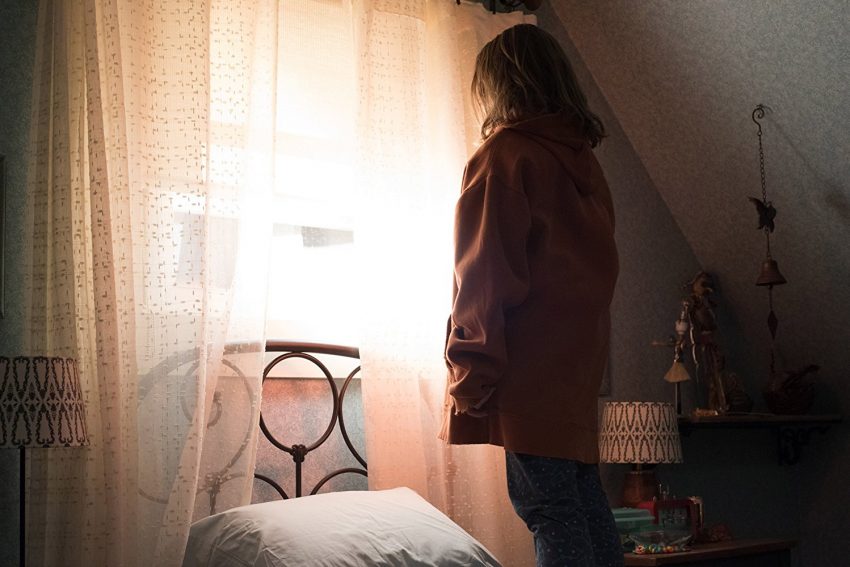 Ari Aster’s debut film, Hereditary, is a horror film in more than one sense of the word. Yes, it is a genre piece with visceral scenes of carnage, a storyline tinged with the supernatural, and the possible involvement of a cult. But aside from these basic building blocks of horror, Hereditary is a horror movie because it’s just that: horrific! Not a moment goes by in Hereditary that doesn’t get under your skin, and its unwavering tone is likely to linger with you for days on end. However, its meticulous craft and indescribably nightmarish tone ultimately don’t add up to much, and the film closes on a disappointingly diminishing note. Still, this is the first American horror film in a while to even come close to evoking the style and status of the greats of the genre.

As Hereditary’s name implies, it is indeed a film about family. The Graham family is an American Midwestern family that’s just felt the death of their grandmother Ellen. The less-than-picturesque quartet consists of artist mother Annie (Toni Collette); her husband, Steven (Gabriel Bryne); their aloof teenaged son, Peter (Alex Wolff); and their peculiar daughter, Charlie (Milly Shapiro). Things get grimmer for the Graham family when Annie begins to see apparitions that she feels might be her mother Ellen’s ghost, bringing the supernatural into their household and into the story.

Every great horror film uses its escapist content to examine real-world horrors, and family matters have always been a common theme. Look at films like The Exorcist, Halloween, and The Shining (or more recently, Krisha)—there’s no arguing that their most prevailing themes regard family matters. It’s logical. Families are forced to love each other, which can elicit strong emotions and open the door for people to do and say devastating things to one another. Hereditary certainly has its fair share of gore and a pronounced cinematic style, but it’s most memorable elements are the ones that really communicate the distress of its characters.

That said, if Ari Aster was hellbent on making his debut feature an utmost piece of pure cinema and craft, then he succeeded profoundly. Every shot in Hereditary bleeds dread, which he accomplishes with intimate interior shots of the Graham abode as well as beautiful vista shots that are smothered in pitch-black foreshadowing. Aster’s choice to film Hereditary in Utah proved to be a wise one, as the location was instrumental in mounting tension. Whether it’s seeing the Wasatch Mountains bathed in a low-evening light, the dismal effect of clouds on a Midwest sky, or simply the awareness that this locale is fairly alien for most viewers, the Utah setting effectively gives Hereditary a no-nonsense feel to it.

Of course, the script does its job carrying the momentum too. Make no mistake, there is a good deal of shocking occurrences that happen throughout Hereditary’s 127-minute runtime, but Aster’s cautious pace make them truly earn their impact. Flexing his cinematic chops, Aster brings a nuance that makes the Graham family feel incredibly real. Consider the scene where Steven asks Charlie if the chocolate bar she’s eating has nuts in it, or how Anne lies to her husband about attending a grief counseling group by saying she went to the movies. When character actress Ann Dowd shows up as a seemingly magnanimous supporter for Anne, it’s hardly a spoiler to say that she’s there to propel the supernatural elements (yes, this is where the cult comes in, and I’m not talking about the Mormons!), but Aster still uses her in a fairly unorthodox way.

Hereditary also benefits from its great casting. Toni Collette turns in what is likely her best performance to date, communicating real maternal anguish as Anne. The scenes she shares with Alex Wolff, playing her son Peter, are the most effective of the film and will drum up some uncomfortable memories for anyone that’s had a fractured parent-child relationship. Milly Shapiro also turns in an unexpectedly terrifying performance as the Graham family’s potentially demonic daughter, even if it might be more the sound design’s presence that makes her character click (every tongue pop she makes really gets you!).

Hereditary is a film dripping with brilliance, but its conclusion keeps it from reaching the highest echelon of horror. While the film’s climax is possibly the most nightmarish sequence to be found in any movie in decades (even eclipsing The Witch), it ultimately ends on a note that is little more than a horror trope. After all the vivid scenes of family strife and unadulterated menace, Aster literally spells it all out for us. After spending two gloriously fucked up hours with the Graham family, we the viewers certainly have questions, but the film answers them in a way that’s just too literal and on the nose. At the end of the day, Hereditary is a movie for people who want to be scared rather than provoked, but for those who were observing Hereditary as something more subversive, it’s difficult not to feel a mite bit cheated.

Ultimately, though, a marginally underwhelming ending isn’t enough to taint Hereditary too much. It is an unforgettable cinematic experience, and it stands alongside films like It Follows and The Babadook as being one of the best examples of contemporary horror. The film’s 31-year-old writer/director should be immensely proud of his film, and it’s terrifying to think of what he’ll unleash on the world next.