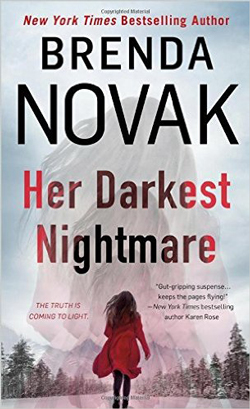 Dr. Evelyn Talbot, a 36-year-old psychiatrist, calls upon her inner resources of courage, defiance, and indomitable willpower, refusing to allow her life to be defined by a sexual and physical attack twenty years earlier by a serial killer—aka her ex-boyfriend Jasper.

Talbot trains at Harvard, becoming a world-renowned expert on the criminally insane, specializing in serial killers. To further her research, especially in order to prevent horrific attacks from occurring, she becomes “the force behind Hanover House, a maximum-security facility located in a small Alaskan town.” The inmates are anyone’s worst nightmare, making the first book in Brenda Novak’s new series, Her Darkest Nightmare (The Evelyn Talbot Chronicles), very aptly titled.

In the words of Robert W. Service, the famous poet of the far north, “Give me the scorn of the stars and a peak defiant; Wail of the pines and a wind with the shout of a giant; Night and a trail unknown and a heart reliant.” During the day, Evelyn Talbot defiantly conquers her memories by unrelenting work. Unfortunately, her dreams splinter the academic and professional refuge she has carefully constructed. Jasper still haunts her.

Twenty years later…He’d kill her if he could. He’d attacked her once before. She had to remember that.

Dropping her pen on top of the notepad she’d carried in with her, Dr. Evelyn Talbot slipped her fingers under her glasses and rubbed her eyes. She hadn’t gotten much sleep last night; she’d had another of her terrible nightmares.

The sun never shines in the dead of an Alaskan winter, increasing the pervasive aura of isolation that envelops the community. When the mutilated body of a local woman—a worker at Hanover House—is discovered, Sergeant Amarok, the local constabulary, is more certain than ever that the maximum security prison is a dangerous element for the small town. Complicating Amarok’s life is his interest in Evelyn: the woman, not the administrator. They have a brief dating history that didn’t end particularly well, so when Evelyn has to take refuge in Amarok’s cabin, it’s both awkward and exciting.

Tears filled her eyes. She wasn’t sure why, because he didn’t frighten her; he turned her on. She was breaking through some sort of barrier that’d kept her from the real world. At last, she was back, experiencing everything she’d been missing for twenty years.

Evelyn’s re-entry into a life that encompasses companionship and love (after a twenty-year hiatus!) is thwarted by murder and the subversion of her leadership at Hanover House by co-workers and inmates alike. Readers who are interested in serial killers will be tantalized by the quotes which start each chapter, like Ted Bundy’s chilling message:

We serial killers are your sons, we are your husbands, we are everywhere. And there will be more of your children dead tomorrow.

The third factor that threatens Evelyn’s life’s work is the certainty that the world’s press will blame her and her research methods if more dead bodies keep showing up. As she ruefully tells Amarok:

“If what’s going on up here turns into a long-running manhunt with multiple, shocking murders—the entire nation will be looking to place blame.”

Her Darkest Nightmare is more than the sum of its parts, folding in a compelling and creative whodunit with frightening encounters with sociopathic serial killers, all taking place as a resilient woman and her police partner confront a mystery in the dark depths of winter in Alaska. Novak’s The Evelyn Talbot Chronicles is certain to be a must-read series.